Controversial former Big Brother Naija housemate and reality show star, Gifty Brian Ajumobi, 25, popularly known as Gifty Powers opines that it is foolish and senseless to dance while pregnant saying some complications could arise from doing so.

Calling the act of dancing while pregnant stupid, the mom-of-1 took to her Instagram page and wrote:

“It’s so foolish and senseless when I see Pregnant women dancing, twisting and jumping. One quick question, Who are you pleasing though? The world, who is rather entertained by YOUR STUPIDITY, THE PREGNANT FROG JUMPER? Nobody knows what you are facing in your home and they don’t care. Do you even know what having “A WEAK BACK” is?

If worst comes to worst, and something complicated happens to the child that you have prayed and fasted to God for, NOW DON’T YOU F*KING SAY GOD FORBID I REJECT IT because you refused to use your brains but rather a chicken brain Now is either the world telling you “OH I’M SO SORRY, GOD KNOWS WHY” or ” THE FACT THAT YOU ARE LOSING YOUR HUSBAND BECAUSE YOU CAN’T HAVE A CHILD ANYMORE DUE TO THE COMPLICATIONS FROM THE JUMPING LIKE A FROG – thingy- ish”.

Just because you are the carrier doesn’t make you the owner of that child’s life, so why making that child uncomfortable. You are causing harm to that child for God’s sake!! It might be a tiny complication but trust me things generates. Guide what you prayed and fasted for. Protect what God gave to you.

Don’t be careless.
Where is it written that it’s a sin to exercise while pregnant huh, I did during @alishapowers but don’t be an Illiterate by over doing it and saying “I MUST GET 5MILLION COMMENTS AND LIKES”….”HEY LOOK I’M THE WORLD’S MOST STRONGEST PREGNANT WOMAN” “LOOK AT ME I CAN DANCE UPSIDE DOWN”

There are million ways of keeping you and your baby healthy and safe. I tell you what, After giving birth, you can carry America’s heaviest building if you want. You are pregnant, enjoy the moments with your husband, enjoy the cupcakes and all. 9months is never 9days.“ 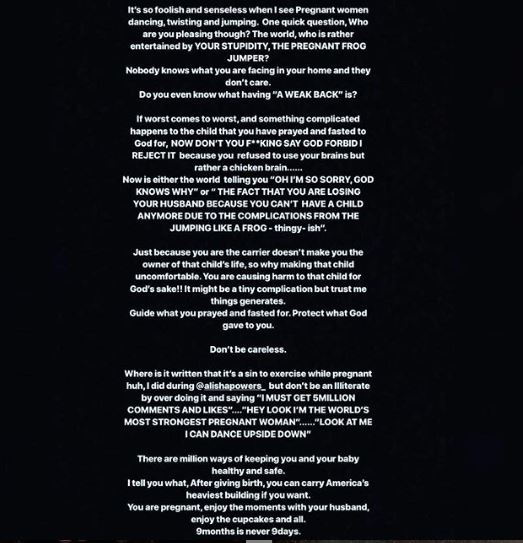 Do you think Gifty is right about her submission?

Professor of Virology, Oyewale Tomori, has disclosed that it is…