An episiotomy is an incision through the vaginal wall and the perineum (the area between the thighs, extending from the vaginal opening to the anus) to enlarge the vaginal opening. Doctors typically make the incision to facilitate childbirth but not a few mums will forget the pain of the cut or its subsequent stitching in a hurry. While this is a matter of life and death for women, a Nigerian doctor, Urchilla Dean is alleging that many men are bribing doctors to turn the medical necessity into a cosmetic one for selfish reasons.

According to Urchilla who took to his Twitter handle @Urchilla01, men secretly meet with, and bribe doctors to stitch their wives vaginas a little tighter after childbirth, so they (the men) do not have to worry about having less satisfying sex, should childbirth have caused the vagina to stretch.

“P.S.A. Dear men; Please stop calling the doctor for a one-a-side to beg or offer to bribe him to stitch up your wife’s vajayjay a lirru tighter after delivery so it can be tight enough for you to enjoy sex again. Issa scum behaviour plis. Signed: management.”

“I dont even uh understand this. Just portrays so much selfishness. Men can really be scum. Wife is in pains of episiotomy but na mekwe dey ur mind. Amadioha knock ur head there…..Esp the ok mes that wont completely pay the hosp bills oooo.Scummanders!!”

See the screenshots below : 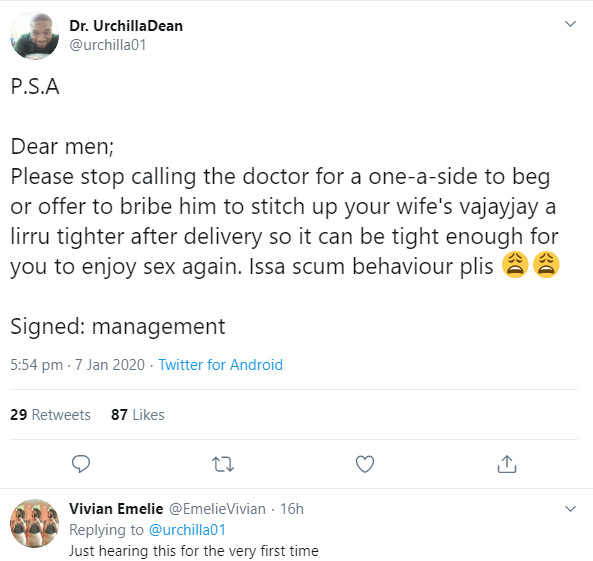 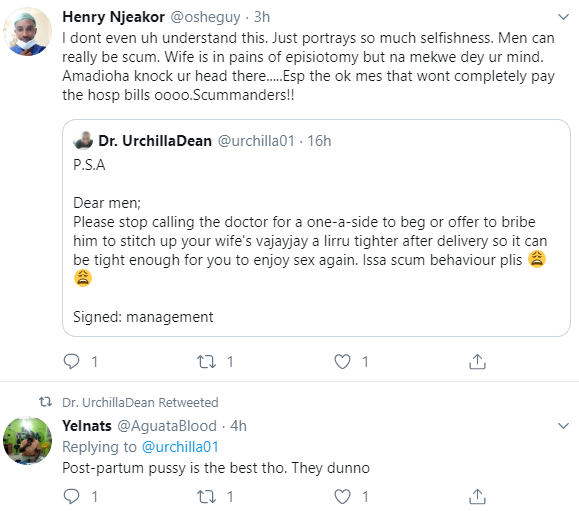