A Nigerian man, Olayinka Odukoya Ajibola has taken to Facebook to air his dirty linen. The aggrieved man publicly announced his decision to turn atheist after allegedly stumbling upon compelling facts revealing that his church members indulged his estranged wife by buying his properties from her; the properties in question, Mr. Ajibola alleges were ‘stolen’ by his now ex-wife.

Questioning the motive of the church members who reached out to him to show their sympathy and help the couple resolve their crisis, the distraught man called them hypocrites who had gossiped and had been previously aware that his marriage was in turmoil.

“I BECOME AN ATHEIST AND WILL NEVER MARRY AGAIN…..

I got compelling facts about my ex wife selling my properties to our church members few weeks after running away with my kids and properties….

1) what really do you want? Money? We are not poor

2) You want to enrich your new bf?

3) You want to travel to London…..? I can afford to send OlaBoy to London every month.

4) Here are my decisions….I disown you and your child publicly….today….

5)You shall NEVER bear my name again..you shall never be called where they call Odukoya

6) I wish you well in your life… You are free to break a marriage…. but stealing spouse properties to sell to church members…..it’s the lowest ebb

PLEASE NO STUPID PHONE CALLS…AM SANE…I DIDNT MAKE MISTAKES TYPING..NO ONE SHOULD EVER CALL ME ON THIS” 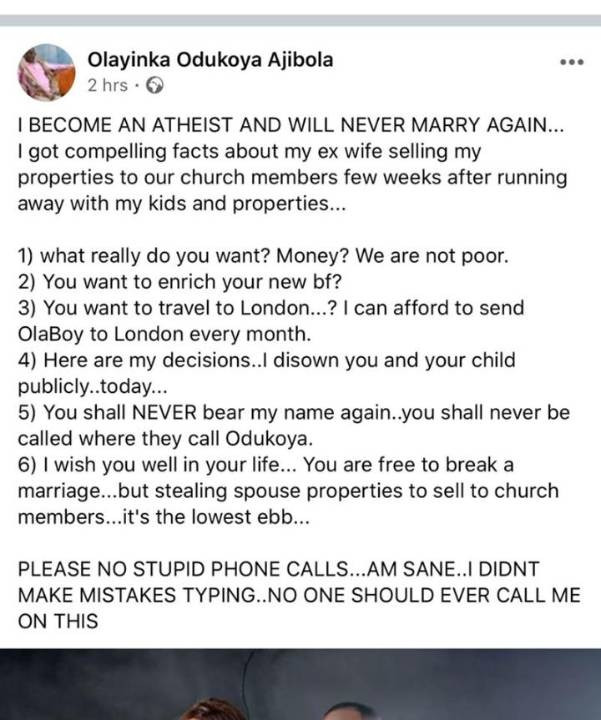 Ajibola vowed not to marry again over the incident he described as the lowest point one can go. In the same breath, he disowned the child he shares with his estranged wife.  He lashed out at church members whose gossips and hypocrisy, in his words, is enough reason to try out atheism.

READ ALSO:PHOTOS: Commotion as Woman Offered Husband’s Car as Seed to a Church in Delta State

“TO MY CHURCH MEMBERS….WE ARE DIVORCED..WE ARE SEPARATED…WE ARE NEVER GOING TO BE TOGETHER AGAIN IN THIS WORLD

Keep your prayers for your families, we do not need your prayers again..it’s too late for us…..sliding into my inbox to ask questions is sheer hypocrisy…

This has been the most celebrated trending breakup of the past couple of months.. To say you never heard means there is no truth in you…and you are worst than the Sadducees …

I want nothing to do with you or your gossips…keep away from me… You alone is enough reason to try Atheism….

Stop insulting me with Jesus talk… Keep away from me…” 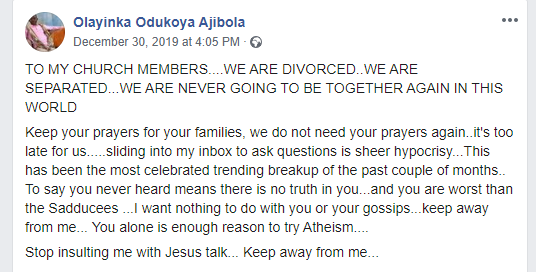