Queen Elizabeth has announced her decision following the announcement by Prince Harry and his wife, Meghan Markle that they have quit as senior members of the Royal Family. In an official statement released yesterday, the Queen says she has agreed to allow the couple have their ‘period of transition’ to create a new life as a young family.

Although the British monarch disclosed that she and other members of the family would have preferred them to remain full-time working Members of the Royal Family, she however disclosed that they respect and understand their wish to live a more independent life.

The statement which was released after a meeting at Sandringham between the Queen and Princes Charles, William and Harry, with Meghan believed to have dialled in from Canada, reads;

‘My family and I are entirely supportive of Harry and Meghan’s desire to create a new life as a young family.

‘Although we would have preferred them to remain full-time working members of the Royal Family, we respect and understand their wish to live a more independent life as a family while remaining a valued part of my family.

‘Harry and Meghan have made clear that they do not want to be reliant on public funds in their new lives.

‘It has therefore been agreed that there will be a period of transition in which the Sussexes will spend time in Canada and the UK.

‘These are complex matters for my family to resolve, and there is some more work to be done, but I have asked for final decisions to be reached in the coming days.’ 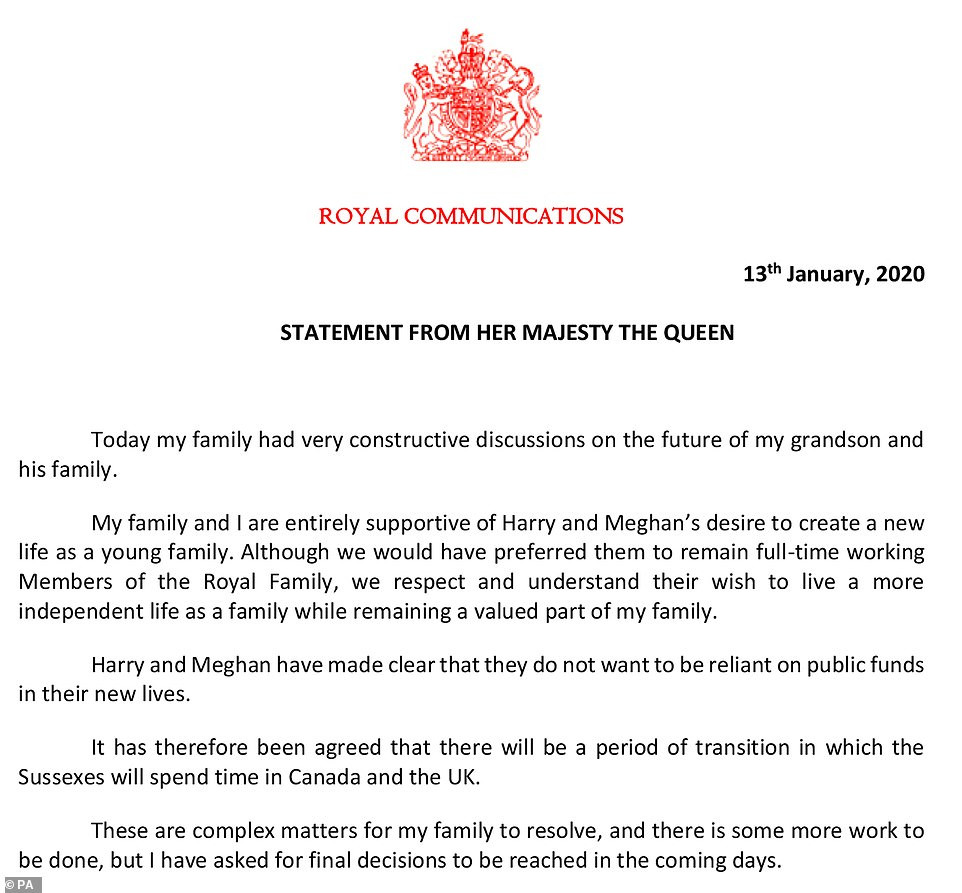 The statement however showed that Queen Elizabeth broke protocol by referring to the couple by their first names rather than the Duke and Duchess of Sussex. This has already led to speculation of the young couple being stripped of their HRH titles.

In a bid to chart the Royal Family through the raging crisis, it was gathered that Her Majesty ordered courtiers to double down on developing a blueprint for the Sussexes future.

It is unclear if the Prince Charles’s Crown Estate will continue to fund Meghan Markle and Prince Harry’s progressive lifestyle, the Queen’s statement however acknowledged the couple’s ambition to become financially independent.