A Twitter user from Zambia in a viral post has shared her thoughts on whether or not women should give men the opportunity to right their wrongs if they have been less than discerning in previous times. @DonCorleAnn took to the micro blogging app to say that nobody should have to beg to be loved correctly or treated with respect. She said she recognises the fact that it could be hard getting over a man you love, but says if he doesn’t treat you right, you should not continue to hold on to the idea that you love him.

She narrated how she dealt with a man who didn’t value her time and presence. According to her, the man, who was her  favourite lost her admiration after not showing up for the date they planned. He reportedly called many months later to tell her that he was leaving the country without offering an apology.

READ ALSO:Fair Bargain? Actress, Toni Tones Shares Why She Declined To See A Love Interest After Their Very First Date

Upon getting back to the country 6 months later, he tried reigniting a relationship with her, which was when she saw her chance to get even.

”A guy I was seeing once told me to get ready and he would be there in an hour. He was my favourite man so i went all out. He didn’t show up, ghosted me for a month. When he did call it was to say how he was leaving the country for work, no apology. Here is what I did

I didn’t question him about ghosting me because honestly why would I want to know? What would his explanation do that his absence & silence hadn’t already shown? I had been seeing his Instagram & Whatsapp stories so I knew he wasn’t dead, he just decided to be an asshole.

After he stood me up, I went away on an out of town trip with my other man to recuperate. Never bothered to text him until he got in touch. 6 months later he calls saying he misses me and that he is moving back. He wanted us to go away for the weekend. I agreed.

I helped him choose a place, made him pay and spent the who week telling him how excited I was. We were supposed to drive there two days after he got into the country but I told him I had to work, so I would meet him there. The day i was supposed to travel i didn’t.

He tried calling I ignored his calls. Went to an art exhibition with another man & spent the entire time posting pictures on my status. It’s been almost a 1yr and I’ve never bothered to text or explain. He texted the other day saying he would like us to have dinner. Never.

He has tried to initiate conversation this past year but I’ve ignored all his attempts. I don’t believe in giving men second chances, if you didn’t appreciate me the first time you never will. I have no time to waste on men who show me they don’t value my time & presence.

I know how hard it is to let go of men you truly like or love. I’ve sat in bed depressed for days wishing men whom I liked wanted me with the same intensity. But I learnt that no man is worth losing my sanity over. I shouldn’t have to beg to be treated right.

And anyway most of these men are only as great as we make them. Once you move on you understand he was never worth your time. Love should be fed on silver spoons not knives. When you experience the difference you won’t look back to breadcrumbs love.” 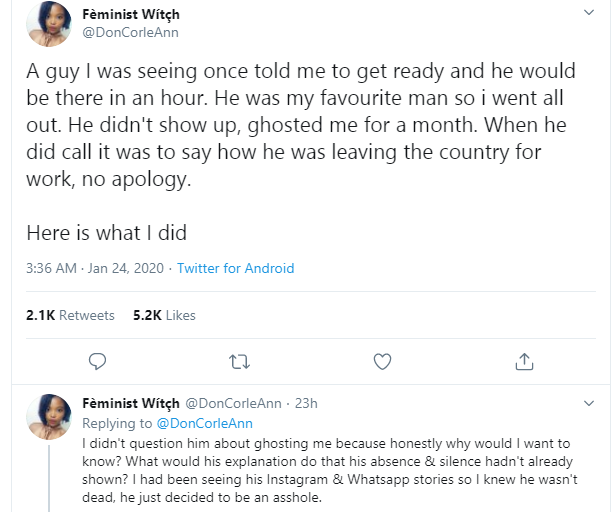 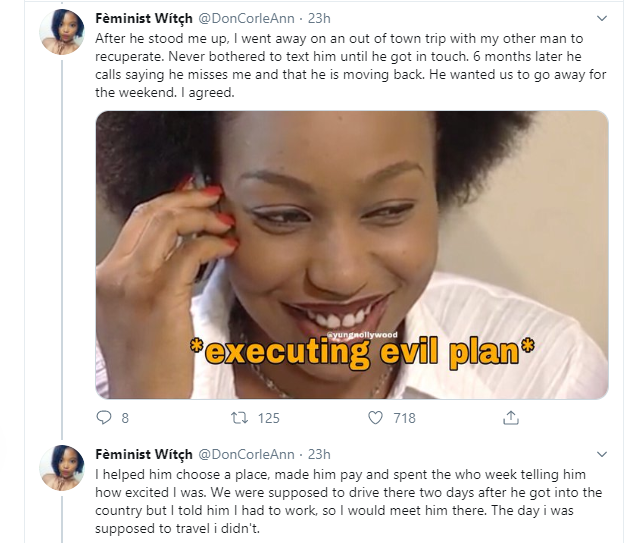 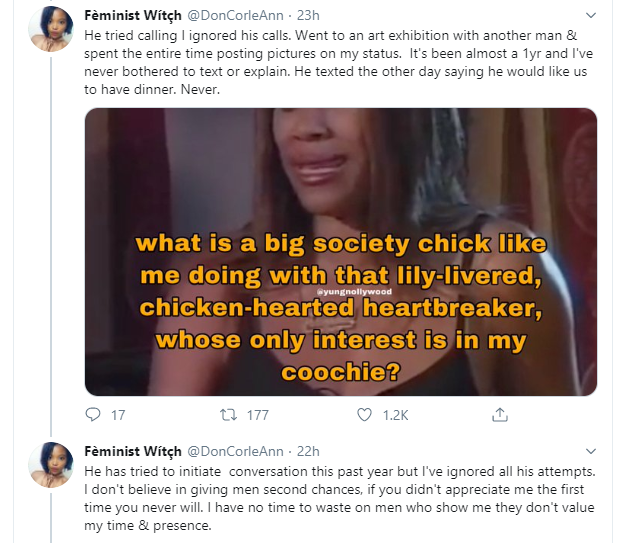