When you are done reading the story of the two young girls in focus, the one question that will linger is ‘what could be more cruel?’  Two girls, Miriam and Roda (not real names) who ended up in IDP camps after escaping Boko Haram attacks have told of how they were deceived by human traffickers who then forced them to become baby-making machines in baby factories.

The girls shared the gut-wrenching story of how they were trafficked from the north to eastern Nigeria, raped almost daily by different men, then had their babies taken from them when they gave birth, blindfolded and sent back to the north.  Al-Jazeera covered their story,

16-year-old Miriam told of how a middle-aged woman she knew as “Aunty Kiki” approached her when she stepped out of her tent to fetch water near the Madinatu Internally Displaced Persons (IDP) camp in Borno state in January last year.

She asked Miriam if she was interested in moving to Enugu to work as a housemaid for a monthly salary. Miriam, who is now 17, wasted no time in accepting the offer and began to prepare for her trip to the east the following day.

She told her 17-year-old cousin, Roda (not real name), about it and advised her to approach Aunty Kiki. When Roda, who is now 18, met Aunty Kiki the next morning, she asked if there was a job for her, too. The woman quickly agreed, so Roda packed her bags.

“We were both very excited to travel to Enugu,”

“We had suffered so much for four years and were happy to go somewhere new to start a new life.”

Miriam and Roda fled, leaving other members of their family behind. They did not have time to tell anyone they were going. 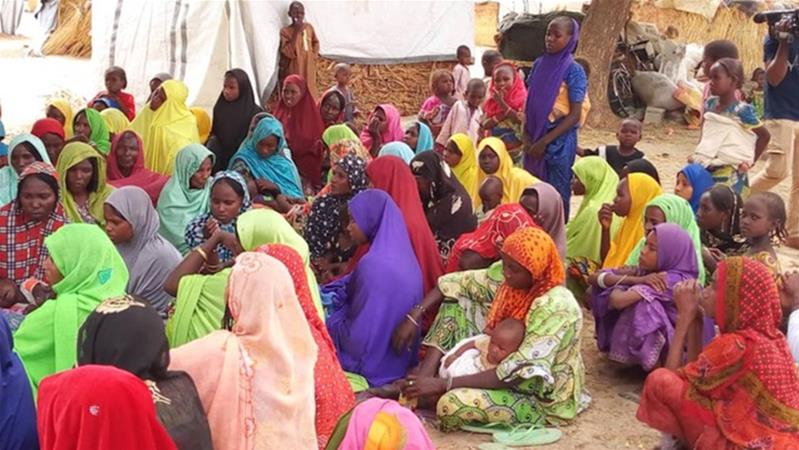 First, they travelled with Aunty Kiki to Maiduguri. Then a 12-hour journey to Abuja followed. They spent the night there in the home of a woman who knew Aunty Kiki.

The next day, after a nine-hour journey, they reached Enugu. Aunty Kiki took them to a compound where she handed them over to an elderly woman she called “Mma” and told the girls to do whatever the woman asked of them.

“The compound had two flats of three bedrooms each, filled with young girls, some of them pregnant,”

“Aunty Kiki said it was where we’d be working.”

At first, the girls thought their jobs were to clean the compound and do household chores as Aunty Kiki had led them to believe. But this was not the case.

“Mma asked that we stay alone in separate rooms for that first night,”

“We were surprised because the other girls in the compound were sharing rooms, some of which had four people in them.”

Late that night, according to Miriam, a man walked into her room, ordered her to take off her clothes, held her hands tightly, and raped her. The same thing happened to Roda, but her rapist was much more brutal.

“When I tried to scream, he covered my mouth and gave me a dirty slap,”

“If he saw tears in my eyes, he slapped me even more.”

The next day, the girls were moved to shared rooms with others, only being sent to single rooms when they were required to “work”. Both girls say they were raped almost daily by several different men.

They believe that Mma and Aunty Kiki work together in the same trafficking cartel and that Mma is the leader of the group. Within a month, they were both pregnant. But still, they were raped.

“It doesn’t matter whether you are six weeks or six months pregnant,”

If any of the men wants you, you can’t say no.

It was pointless trying to escape, they explain, because the compound was guarded by men with guns. Around a dozen girls were living in the compound when Miriam and Roda first arrived. But the number would change as the girls gave birth and were sent away, before new girls were brought in to produce more children for the cartel.

Miriam gave birth to a baby boy in the compound, with the assistance of a midwife who was called in from outside. But her son was taken from her.

Three days later, she was blindfolded and taken to a bus station where her traffickers made sure she boarded a vehicle back to the north.

“They didn’t want me to know the way to the compound, that’s why they covered my face,”

“I was given 20,000 naira to assist in my transportation to my destination.”

She first went to Abuja where she spent a night on the street before boarding a commercial vehicle back to Maiduguri.

Like Miriam, Roda was also discarded after she gave birth to a boy. The cousins were reunited in Madinatu, where they are now living together in a small mud house, not far from the camp they were trafficked from.

Luckily, we got to Madinatu on the same day,

says Miriam, who spent weeks on the streets of Abuja, before she was able to make her way back to the northeast.

We thought it was no longer safe to stay in the camp, so talked to the man who owns this place to let us stay here.

To earn money, the girls now make and sell groundnut cakes at a mini kiosk just outside their compound. The girls do not know how much their children were sold for but it was revealed that baby boys are more expensive than girls in the baby sale business.

“Some traffickers let their victims leave after giving birth because they believe if girls stay for too long, they could develop a plan to expose the trade,”

They are scared of sabotage.

Baby factories are more common in the southeastern part of Nigeria, where security operatives have carried out several raids, including an operation last year when 19 pregnant girls and four children were rescued.

The victims are often promised good jobs only to end up being exploited or enslaved, Al Jazeera reveals in the full report.

A primary six pupil identified as Basira Umaru has narrated…