An excited father identified simply as Jon took to Twitter to announce the birth of his daughter who came after several attempts with his wife. The elated dad shared a photo of their newborn wearing a dress with an inscription that read ‘I’m the rainbow after the storm’.

@JazzyJon who welcomed his daughter, named Sofia Mary Jane with his wife after 7 years of trying said they went through 5 IVF cycles, 9 failed transfers, a miscarriage, 4 surgeries, an ectopic pregnancy and 70 negative tests.

READ ALSO: See The Remarkable Story Of How God Doubly Blessed This Nigerian Couple Who Pined For A Child For 16 Years

After 7 years 5 IVF cycles, 9 failed transfers, a miscarriage, 4 surgeries, an ectopic pregnancy and roughly 70 negative tests we are finally able to introduce Sofia Mary Jane to the world! Please share this story to spread hope to the thousands of couples going through similar 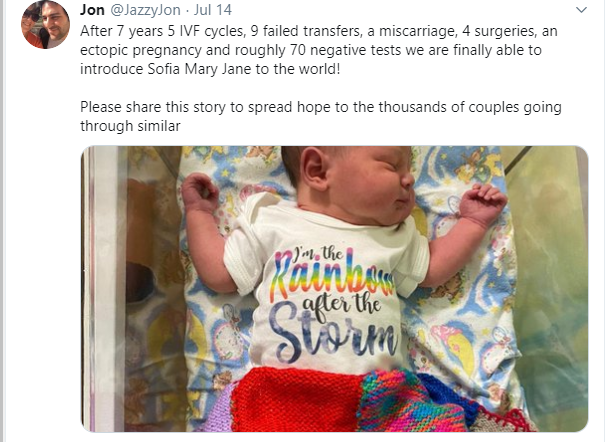