A Lebanese bride who was rocked by the massive blast in Beirut while posing for photographs on her wedding day has spoken out about her terrifying ordeal. Israa Seblani, a 29-year-old doctor working in the United States was seen posing in a beautiful white gown for the camera before the shoot was interrupted by the massive explosion.

After the explosion,  it was learned that Israa who arrived in Beirut three weeks earlier to prepare for her wedding, helped to check on the injured nearby, before fleeing central Beirut’s Saifi square to safety.

The Lebanese bride whose wedding photo shoot captured the Beirut explosion spoke about the ordeal to @Reuters as she returned to the same spot a day later https://t.co/SVJfT8OoR3 pic.twitter.com/63my38T1rc

READ ALSO: Woman Tells Heartbreaking Story Of How She Was Left At The Altar On Her Wedding Day

She and her husband, Ahmad Subeih, 34, a businessman in Beirut, later spoke with Reuters about the terrifying ordeal.

“I have been preparing for my big day for two weeks and I was so happy like all other girls, ‘I am getting married’.

My parents are going to be happy seeing me in a white dress, I will be looking like a princess,”

“We started to walk around and it was extremely sad, it was not describable the devastation and the sound of the explosion,”

“We are still in shock … I have never heard anything similar to the sound of this explosion.” 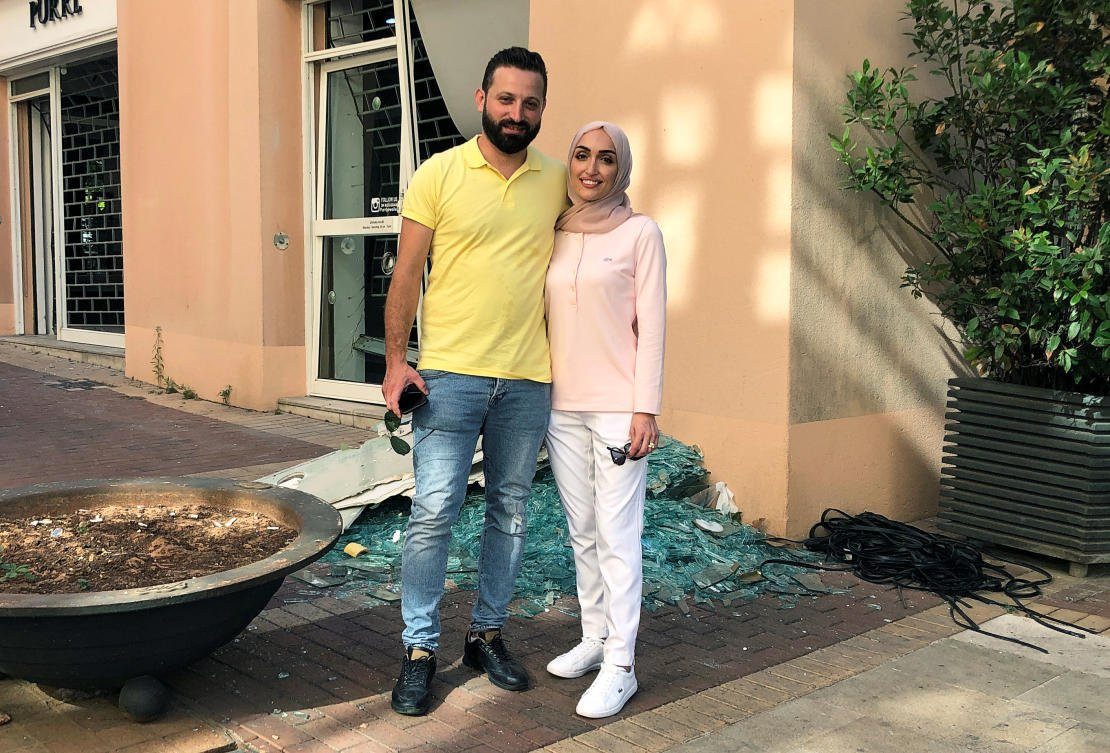 “When I woke up and saw the damage that happened to Beirut, the one thing I said was thank God we are still alive.”

After the blast, she and her husband managed to carry on with their celebrations.

“My husband told me to continue, we can’t stop. I was like okay, why not, we continue. I was not living the moment actually, I was like walking, my face was smiling, my lips were smiling, that’s it, not more. Then we went to have a dinner.”

He recalls entering the damaged hotel on Wednesday to retrieve their belongings and passports.

“The scene in the room was unbelievable,”

Subeih is currently waiting for a visa to the United States so he can join his wife, who has admitted that living in Lebanon after Tuesday’s blast is not an option.

“There is a lot of damage, many people were killed and wounded. But also if I want to look at us, myself, my husband, the photographer — how we escaped unharmed, I thank God for protecting us.

“This alone makes me feel optimistic and to keep the joy of the occasion that I came here to celebrate.”

It has been reported that a welder ignited 2,700 tons of explosive chemicals which was stored in a warehouse without safety measures since 2014.

Watch a video of the devastating explosion below:

Using dimensional analysis I estimate that the energy contained in the awful #Beirut explosion was approximately 12 Terajoules = 3 kilotons of TNT. For reference the "Little Boy" dropped on #Hiroshima was ~13-18 kilotons of TNT. #orderofmagnitudephysics pic.twitter.com/Pfhew7mXwE