Singer/Mum-of-Six, Lauryn Hill Opens Up About Her Life & Her Parenting Choices After Daughter, Selah, Detailed Childhood Trauma From Her Mother American singer and mum-of-six, Lauryn Hill has opened up about her life, career and children in a deep, heartfelt post on Instagram. This comes after her daughter, Selah Marley, detailed her childhood trauma in a two-hour Instagram Live earlier this week (read here).

Selah’s revelation led to a backlash as people accused Lauryn Hill of being an abusive mother. Reacting, the 45-year-old singer addressed her daughter’s revelation and also revealed why she distanced herself from the music industry.

Hill said that how she felt the public treated her during her career impacted her life as a mother.

“My life has been about protecting my children from all kinds of danger, and that’s only possible when you protect yourself from the danger as well”

“We’re both learning and healing, and each of my children has a similar story and journey. All of you in a rush to crucify someone, careful who you string up or nail up. You might have an extremely limited view of the actual reality.”

“We all hate abuse and exploitation, sometimes in an effort to fight against it we can easily become the abuser, the exploiter, and THIS is what we have to watch for. No one is exempt from needing to watch themselves in this way.”

She did not blame her daughter for her statement, instead she supported her for speaking her mind and stated that it was her daughter’s way of healing.

The songstress also detailed why she “stepped away” from the music industry.

“An entire operation trying to break an artist with a voice and knowledge of herself– way ahead of her time– was in motion. I was affected, my family was affected, my children were affected.”

Later in the post, Hill wrote “When I realized that the pressure on me was so incredibly hypocritical and unfair, criminal even, that even my children weren’t allowed to be children, I stepped away”

Clarifying why she was no longer in the music scene, Hill explained

“I wasn’t removed, I STEPPED AWAY. Weening myself and my family from the addictions that systems of control attempt to use through fame and celebrity is no joke,

“It’s painful and people were not above using my children to keep exploiting me.”

“Sell a few million copies of a recording and see the wolves and sharks for yourself before you determine what’s appropriate and what’s not. The danger was REAL!”.

Read the rest of Lauryn Hill’s statement in full below. 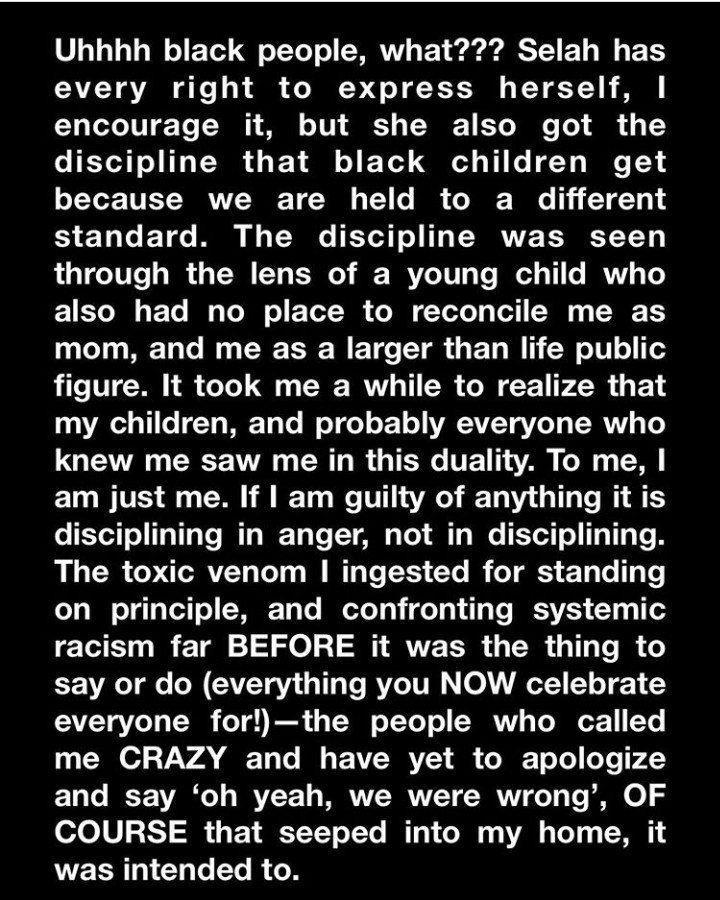 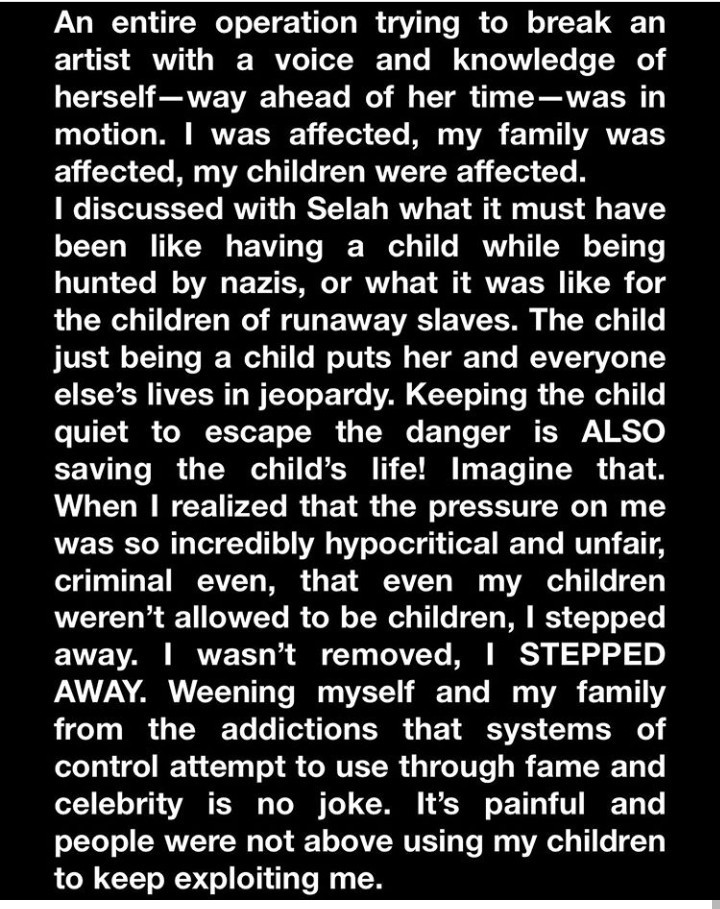 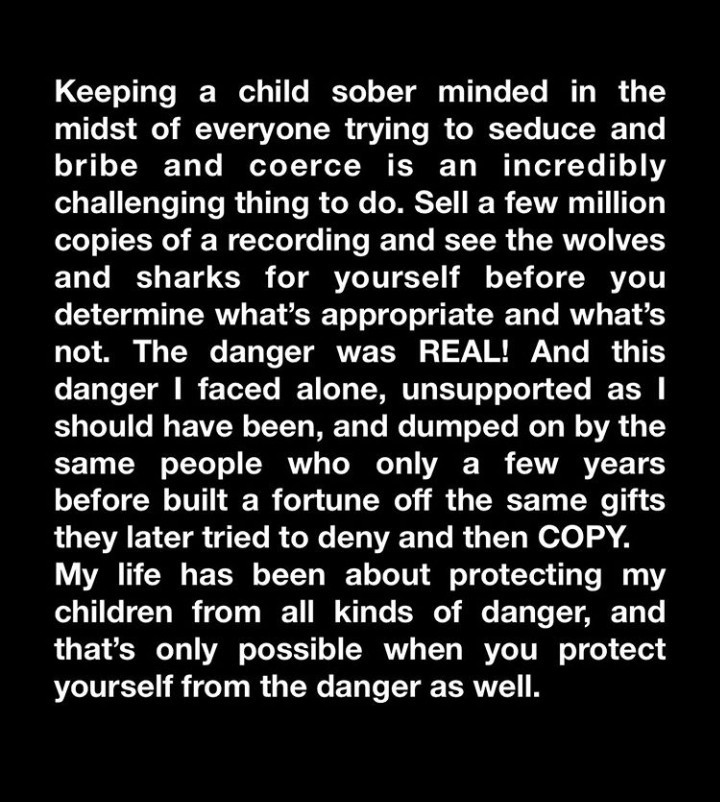 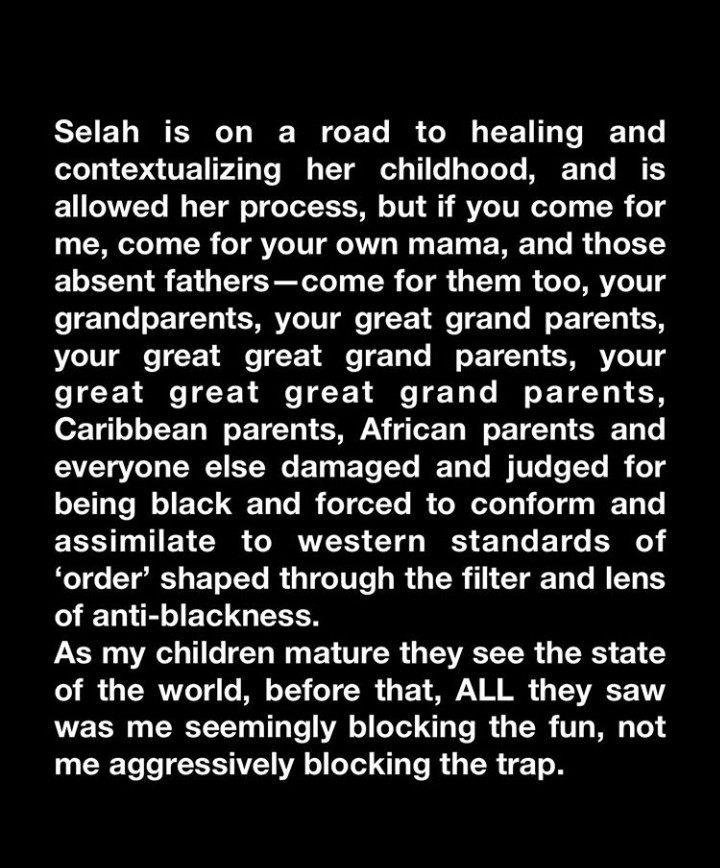 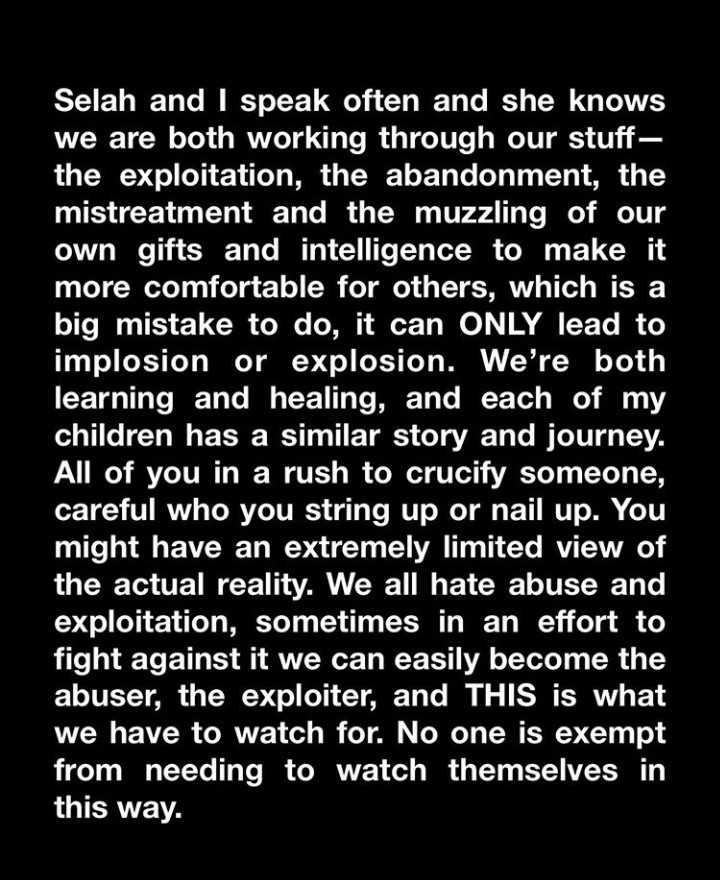 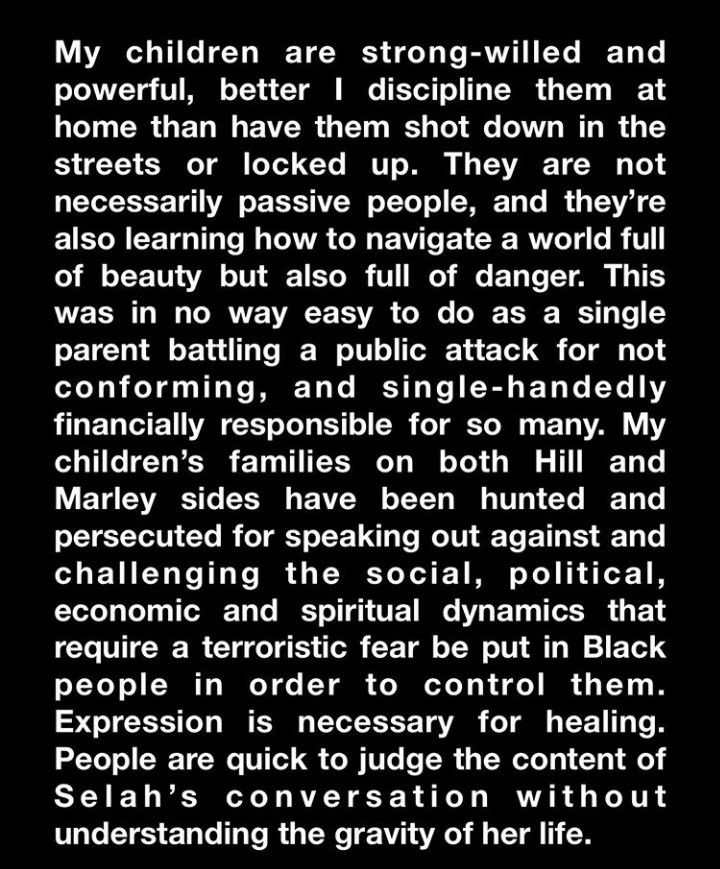 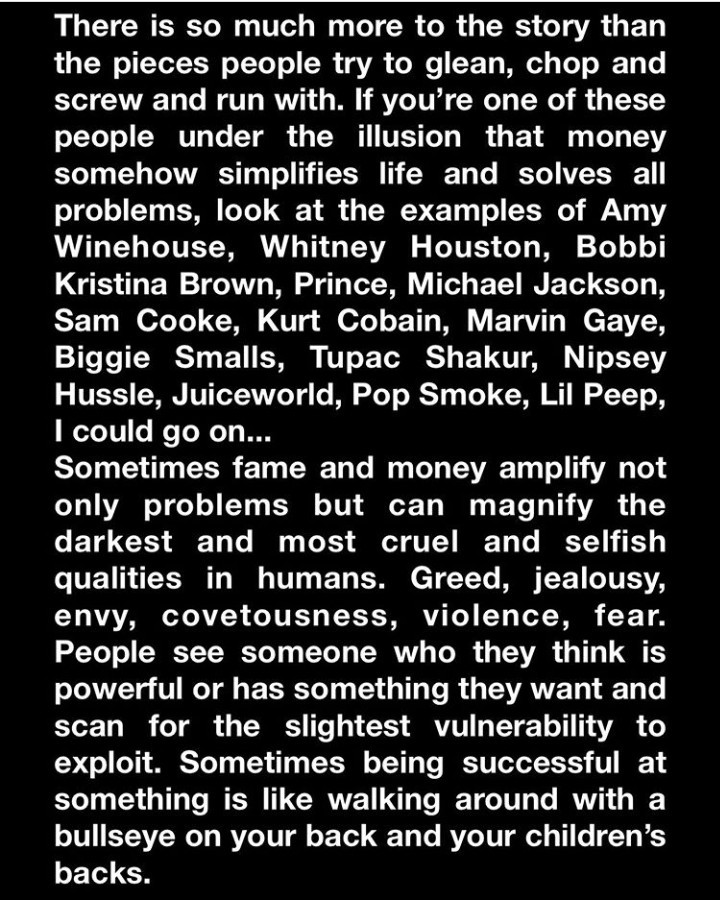 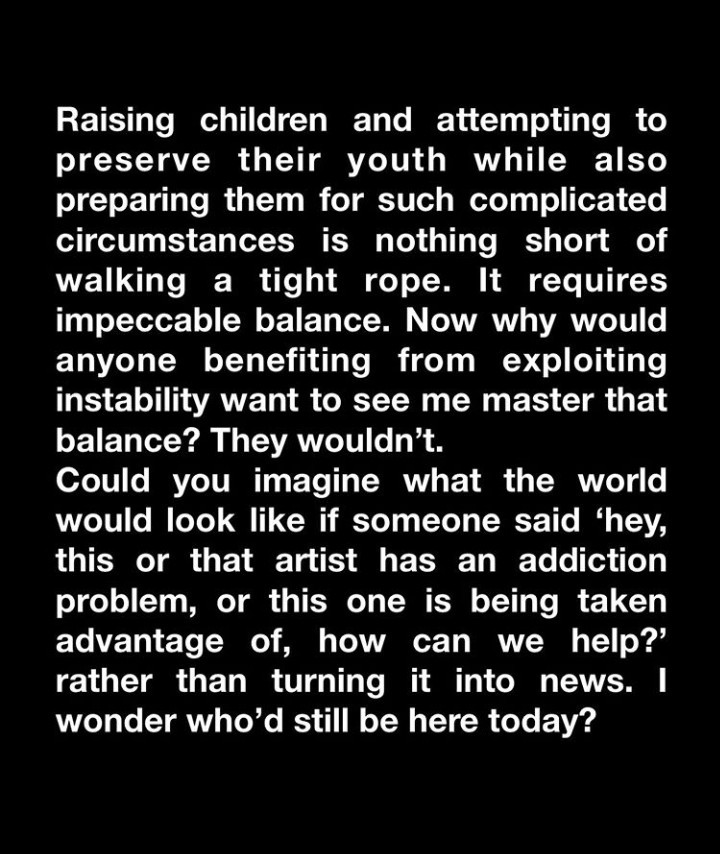 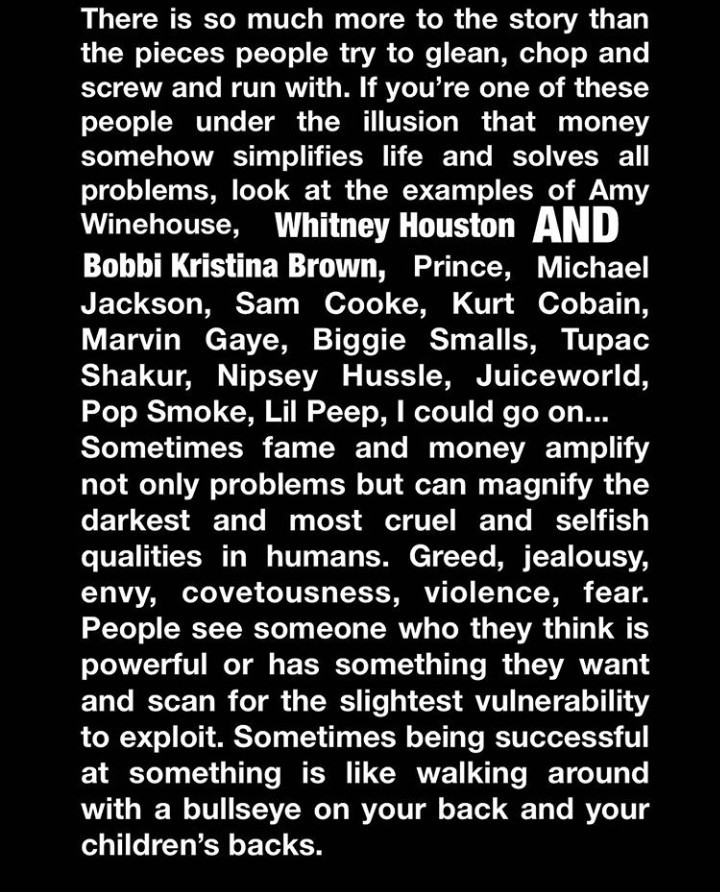 Superstar singer, Simi has penned down an emotional post to…