Tennis champ and mum, Serena Williams has put word out to budding young tennis players on Monday — her three-year-old daughter, Olympia, loves the game and will soon take it up.

“She’s a fan of tennis, she loves watching, she comes out and watches me practice,”

Williams said of Olympia after moving into the US Open last night.

The toddler was seen smiling and waving at her mother during Williams’ third-round win against Sloane Stephens inside Arthur Ashe Stadium on Saturday. 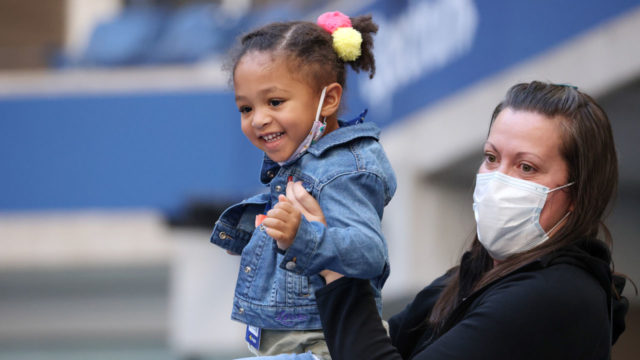 READ ALSO: Serena Williams’ Shout Out To Working Mums In New Post Is So On Point

“She loves when I practice on this court because she can sit and watch,”

Williams said after beating Greece’s Maria Sakkari in the last 16 on Arthur Ashe.

“She’s three now. I’m like, ‘I gotta put my career aside and get her a racquet in her hand.

“Seriously, that’s what I told my husband yesterday. I’m like, ‘We got to get a racquet in her hand,”

The Bulgarian is playing in her first tournament in three years after giving birth to a son.