“Can women have it all?” is a question often posed to career women who are trying to build an empire and also manage their families. Most people are of the opinion that women can have it all with supportive partners, but some have opined that women can never have it all as one area of their lives – either family life or professional life – will have to suffer for another to thrive.

Whereas men do not have these issues because they can thrive in their careers despite having a family. Former PepsiCo CEO, Indra Nooyi, speaking from experience, said women cannot have it all.

Indra, who was PepsiCo CEO for 12 years and worked in the company for 24 years, said in a 2014 interview:

My husband and I have been married for 34 years.

And you have to co-opt a lot of people to help you. We co-opted our families to help us. We plan our lives meticulously so we can be decent parents.

But if you ask our daughters, I’m not sure they will say that I’ve been a good mom. I’m not sure. And I try all kinds of coping mechanisms.

I’ll tell you a story that happened when my daughter went to Catholic school. Every Wednesday morning they had class coffee with the mothers.

Class coffee for a working woman—how is it going to work? How am I going to take off 9 o’clock on Wednesday mornings?

So I missed most class coffees. My daughter would come home and she would list off all the mothers that were there and say, “You were not there, mom.”

The first few times I would die with guilt. But I developed coping mechanisms.

Nigerian-British medical doctor, Ola Brown who is married and also building a career, said she has been asked the same question multiple times and she responded on Twitter.

She said “having it all” is subjective as people want different things out of life. She added that judging based on what people refer to as “all”, the answer will not be based on gender because even men do not have it all.

She concluded by asking if Aliko Dangote, Jeff Bezos and Bill Gates actually have it all.

One of the questions I get asked at womens groups is “Can a woman have it all?”

To me it depends on what you mean by “all”. If you want a massive family with whom you spend 90% of your time and a small hairdressers that does N1m per year, of course. Not everyone has to be Aliko.

But if your definition of “all” is building one of the largest companies on the continent/in the world with billions in revenue, then the question almost loses its relationship with gender.

The people that have done it. Jeff Bezos, Aliko Dangote etc. Do they have it all? 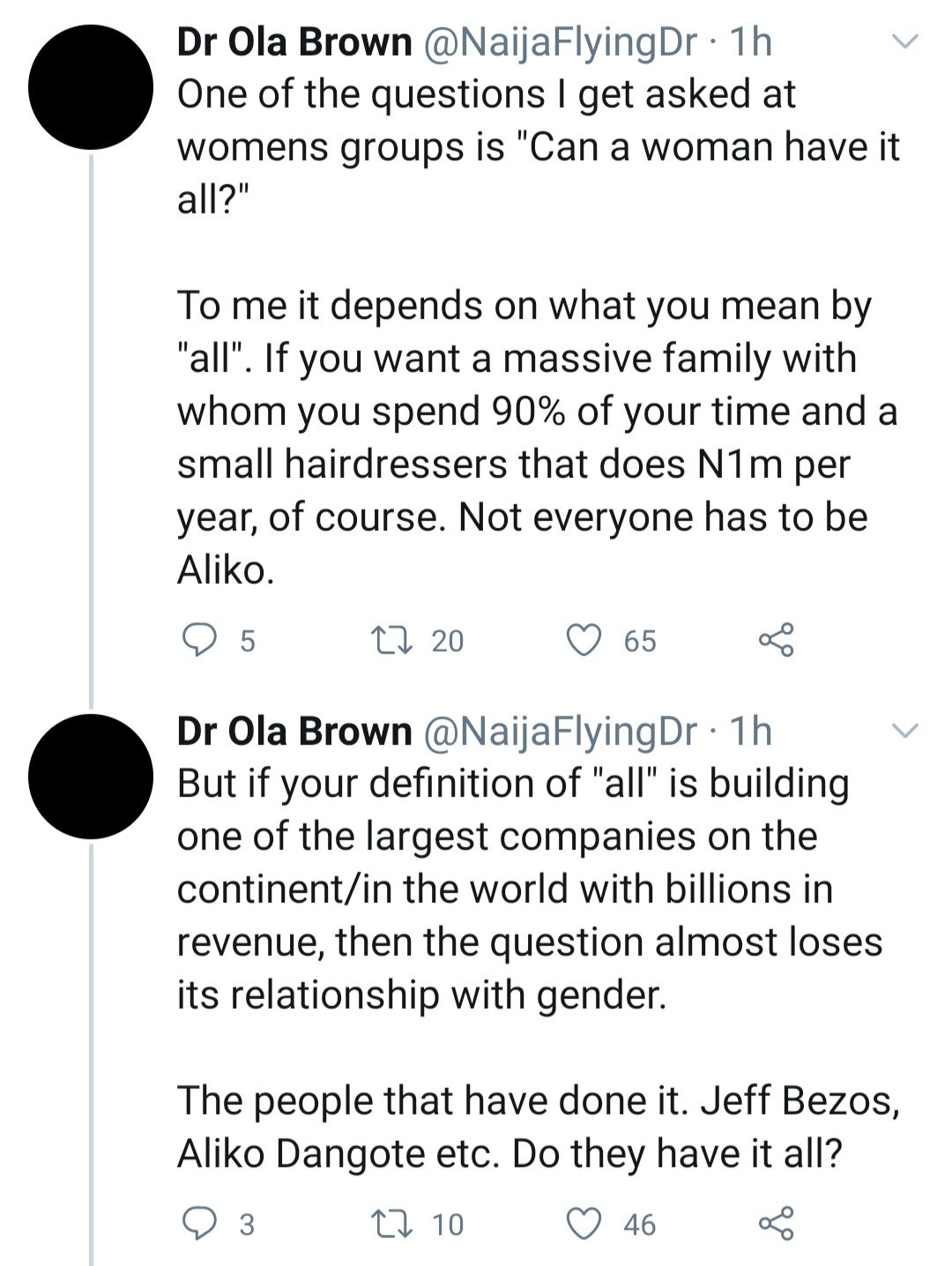 Below are reactions to her response: 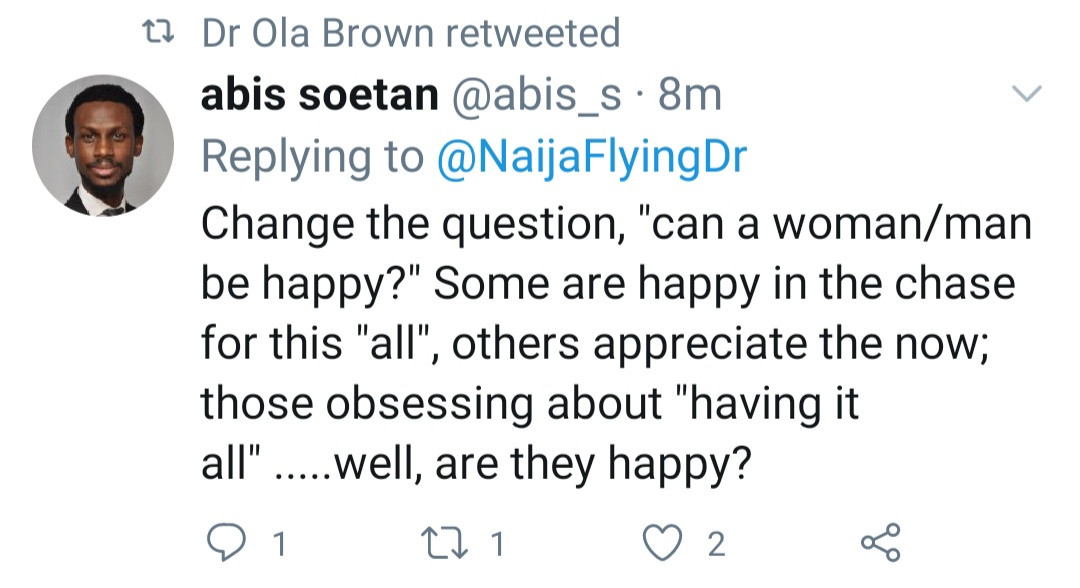 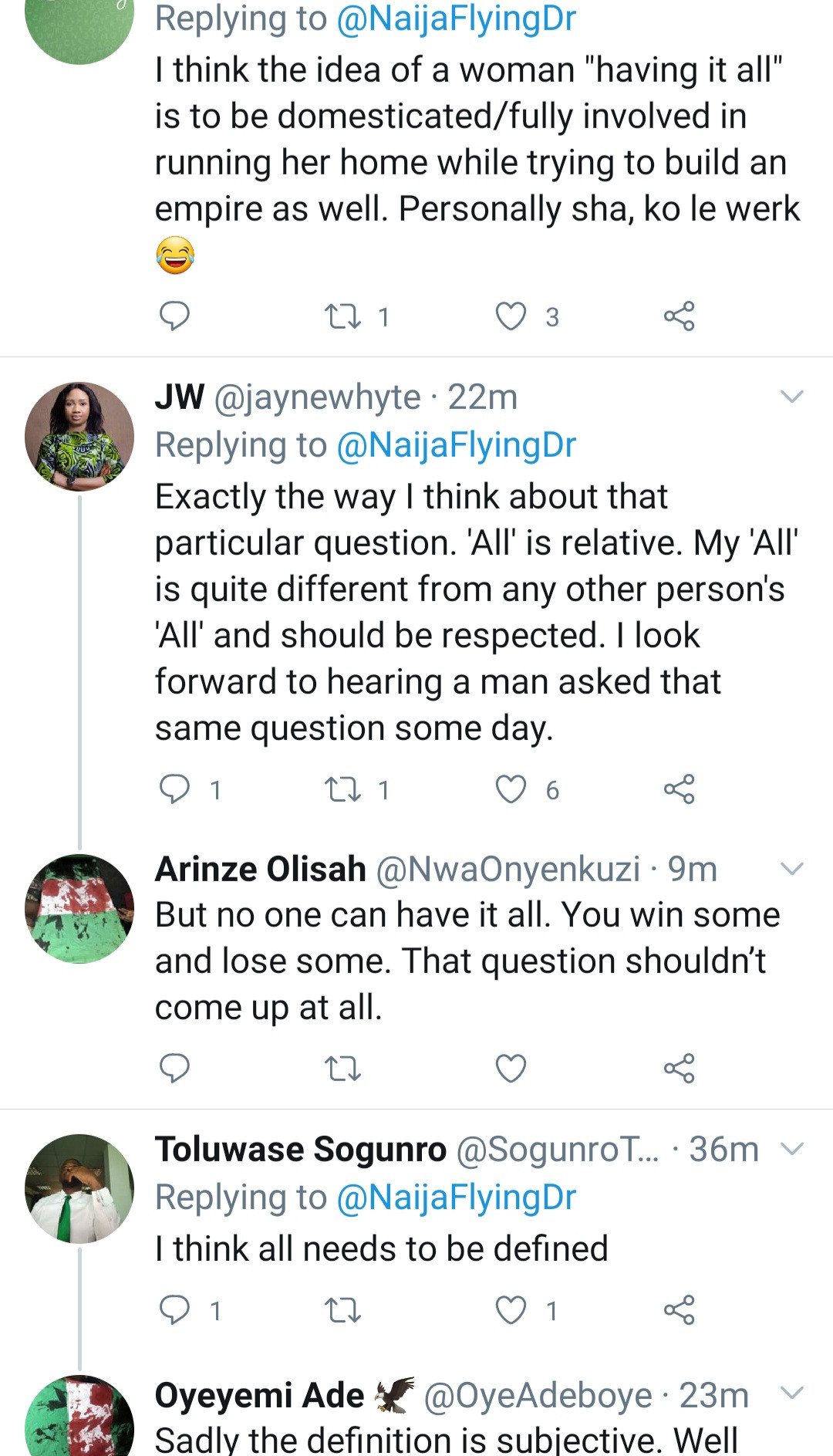