Wendy who disclosed that she’s a student had tweeted;

I’ve seen tweets from guys saying they can’t date a girl that’s not financially stable. I’m a student. But never, like never have I felt attacked by such tweets.

What I want must not make sense to you. It’s choice boo.

Reacting to the lady’s tweet, Leo stated that it’s a smart choice for young men to refuse to date jobless women. He added that guys should have their own preferences just as women have theirs.

He tweeted in response;

Guys should have their own preference just as women have theirs. Dating someone that’s not working or doesn’t have adequate allowance is a burden.

Nigeria, the poverty capital of the world, if a young man trying to come up refuses that burden,

I think it’s a smart choice.

See a screenshot of the exchange below: 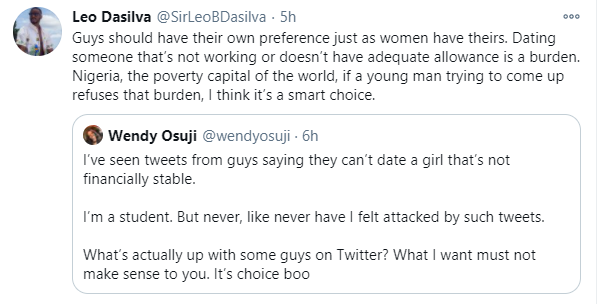