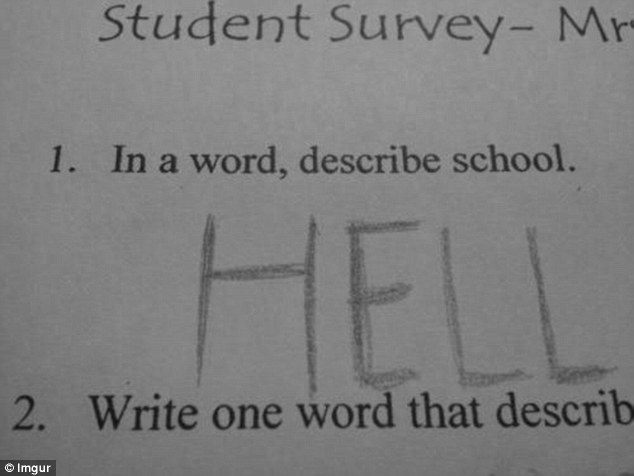 Children are constantly acting as if they know more than their teachers and parents.

These hilarious homework photos has proved that the best answer is not always the right one. Despite being totally wrong, these cheeky kids put teachers in their place, with one naughty kid who simply wrote ‘hell’ when asked to describe school in one word- which surely did not go down well with their teacher.

Dailymail reports that ‘Know-it-all’ children have put their teachers in their place – from reminding them that ‘not everyone has two legs’ in a maths puzzle, to calling the science of classifying living things ‘racism’. 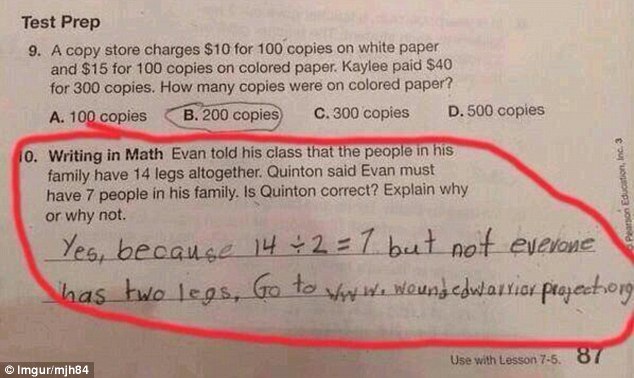 One young kid even had the gut to tell their teacher ‘you should not hit dogs’ when asked to fill in the correct word on an exercise sheet and a student bossily wrote that the best thing to do if you ‘fell on the playground and scratched your knee’ would be to ‘get up and deal with it’. 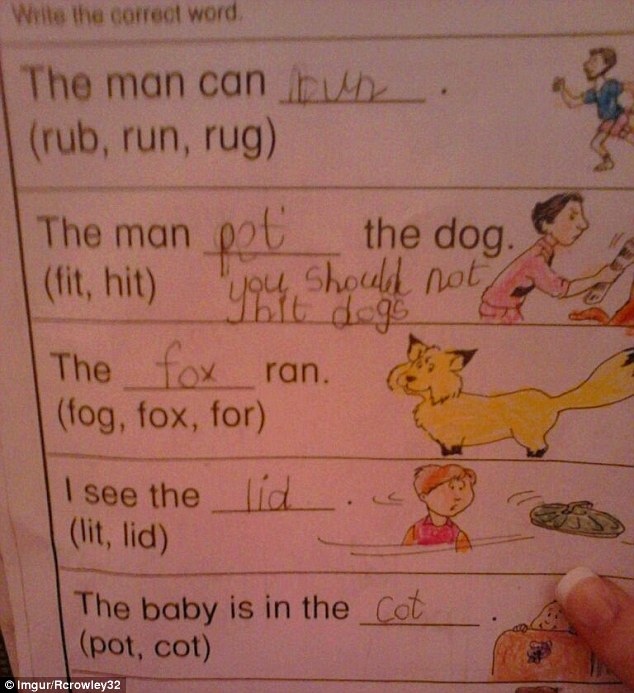 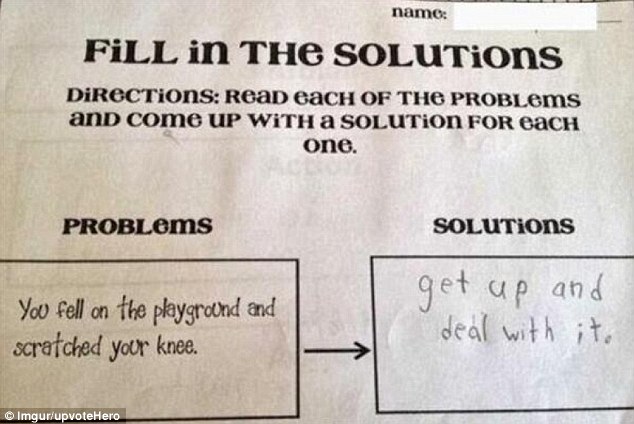 Another naughty one wrote back the question asked, as the answer. 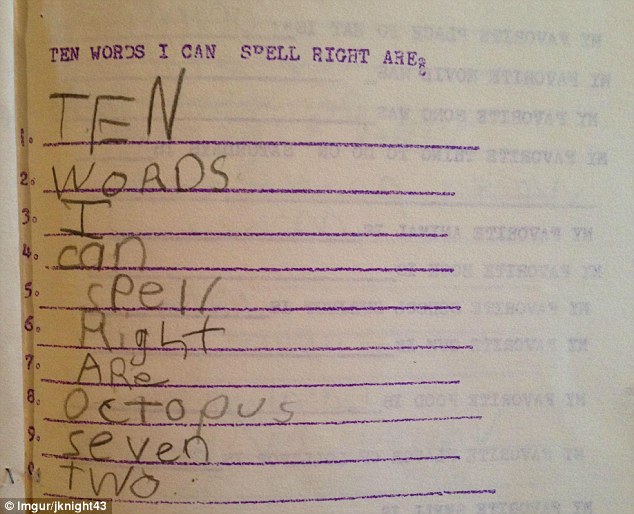 A pupil was also asked to ‘assume the role of a Chinese immigrant in 1870’ and write a letter home describing their experiences penned the whole letter in Chinese – presumably not what the teacher was expecting.

When translated by Vanessa Tan, the letter read: ‘The life here is bad. The working condition is not good and lacks employee benefits. However, please do not worry. Only about 10 people get serious injuries everyday and I am very careful.

‘We have opened a small shop and business is not bad. Although I am not very good with the English language, I know enough to understand what the westerners are speaking.

‘Hope that I can make a name for myself. I am working very hard here and will take good care of myself. How is everyone? I missed all of you a lot and hope that we can meet again.’ 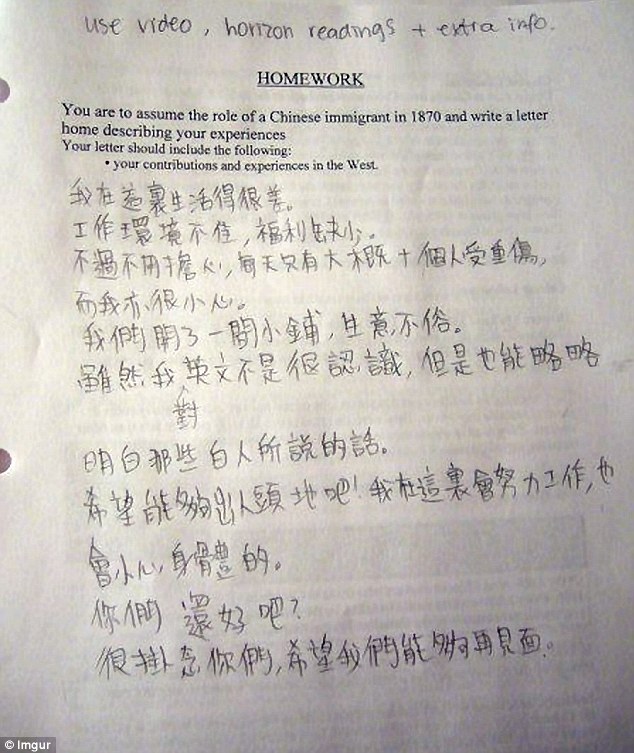 When another kid was asked what he thought he would look like in 100 year’s time – unbelievable, Warren drew a tombstone with his name and writes ‘RIP’ on it. 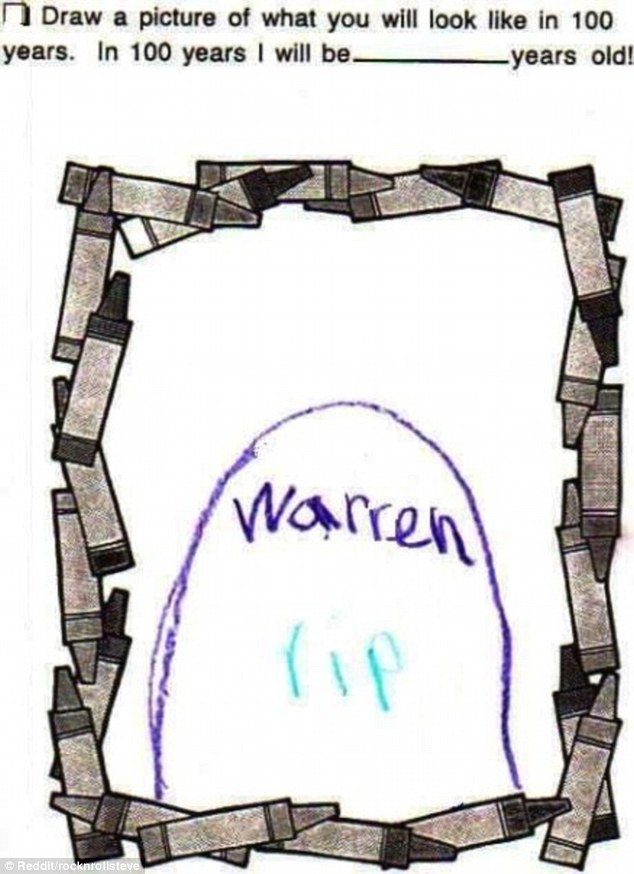 One exasperated teacher was forced to comment on one pupil’s spelling test, shocked by the strange sentences they chose to illustrate the word they were being asked to spell. 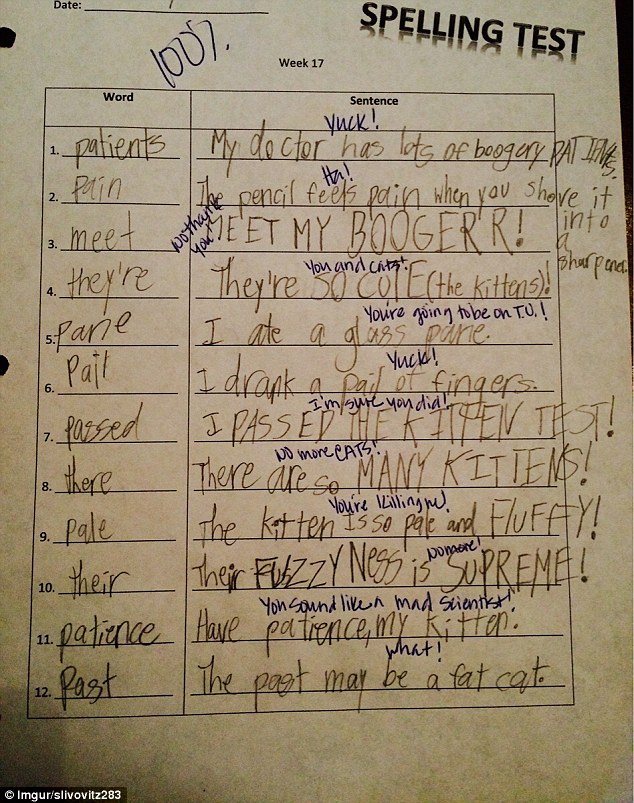 One cheeky kid was asked to unscramble some words, they answer ‘We have sh**’ is probably not what their teacher had in mind.

One kid wrote ‘a pig is a pig until it becomes a bacon’, which doubtlessly made their teacher smile. 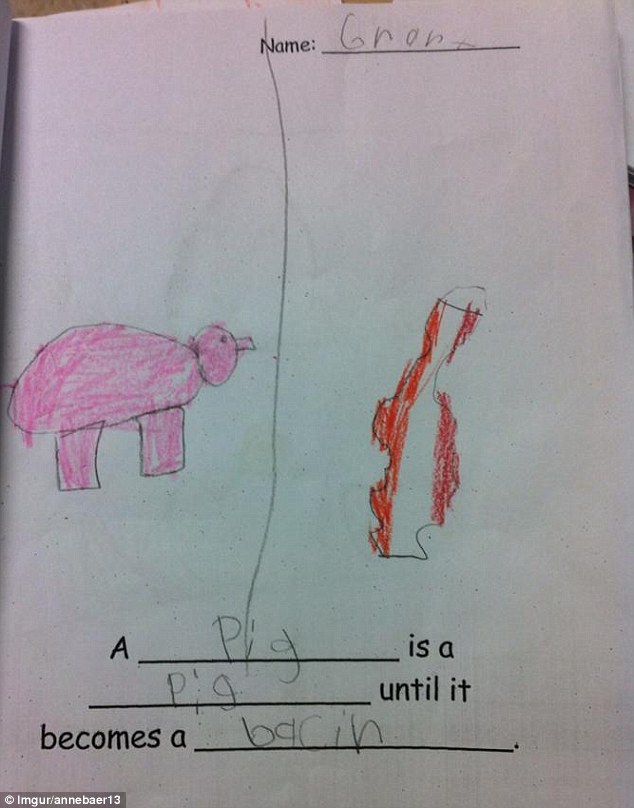 LOL! Ricky, age 10, gave some advice for making a marriage work: ‘Tell your wife that she looks pretty, even if she looks like a truck’ 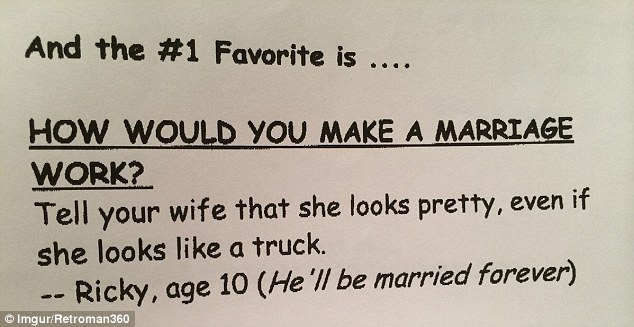 Hope was asked to name the quadrilateral, but chose to give all the shapes a human names, including Sam, Cate, Hary and Bob. 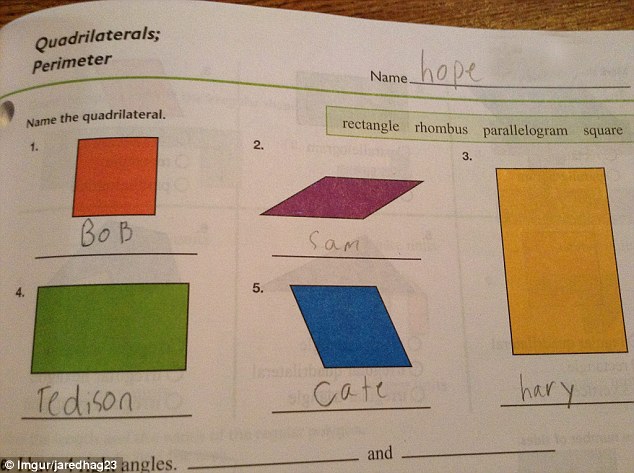 More photos after the cut… 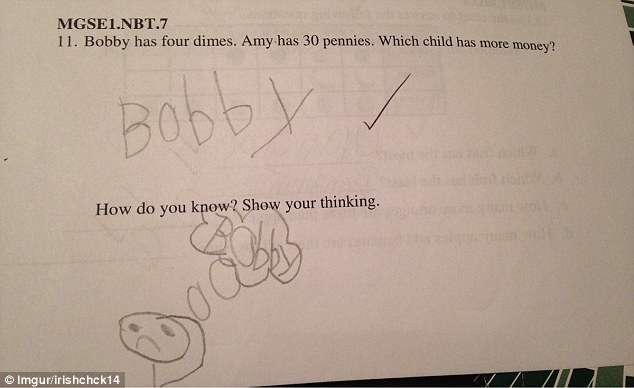 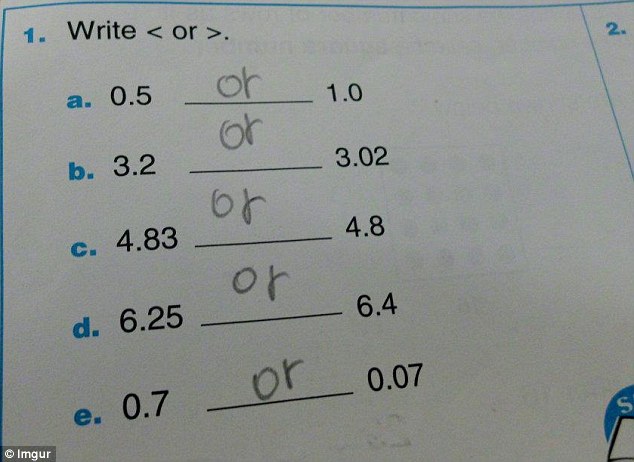 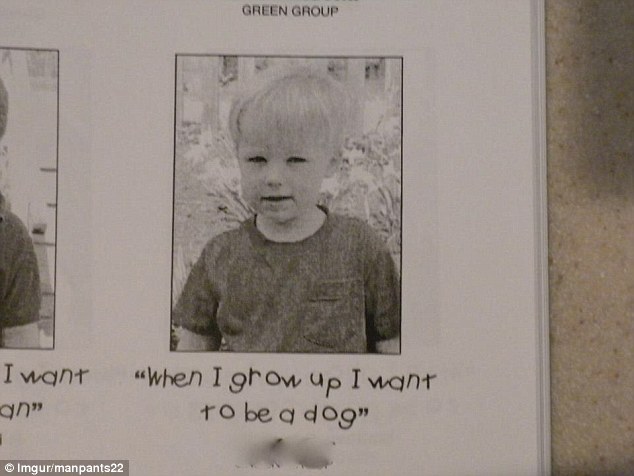 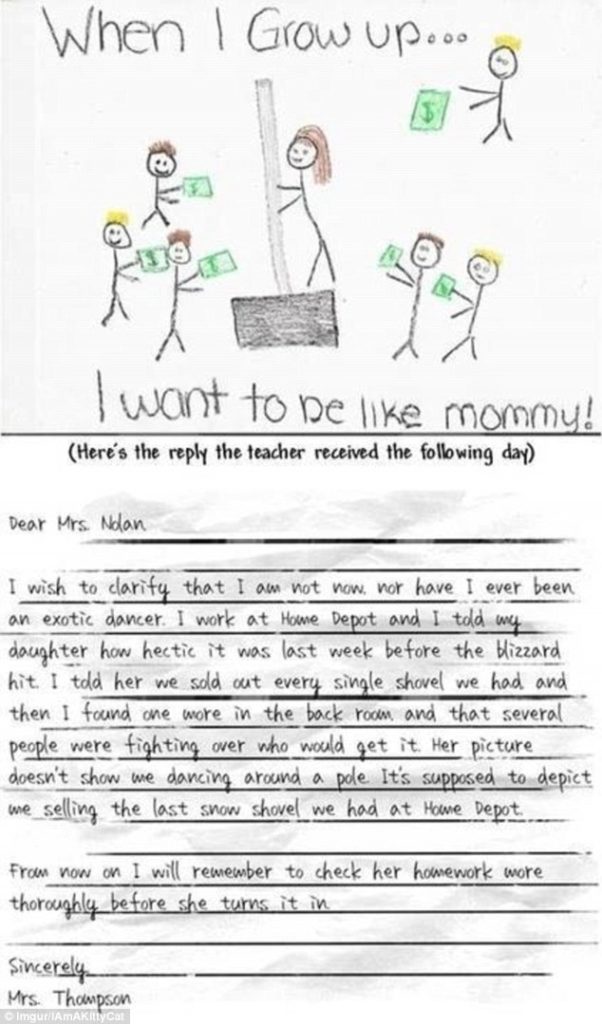