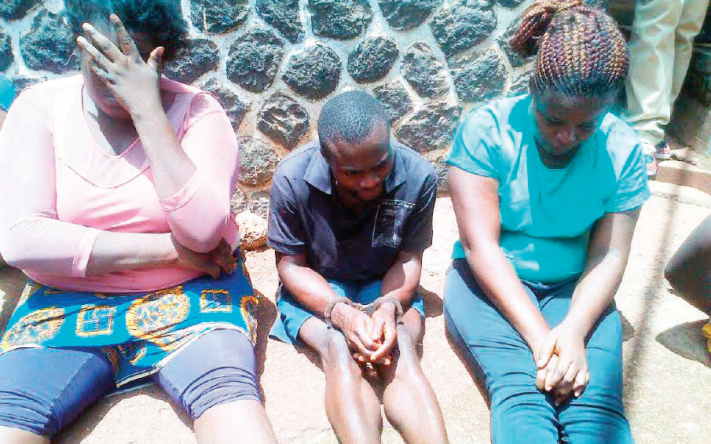 Two sisters identified as Onyinyechi and Akunna Achime were paraded by the police in Enugu for scheming their mother’s kidnap for a ransom of  N2.5 million from their Lagos-based older brother.

According to New Telegraph, the sisters had enlisted the help of a male friend, Monday Egbe, who was also paraded, to abduct the woman identified as Mrs. Hannah Achime.

“Monday Egbe, aged 30 years, was arrested and he confessed how two of the victim’s daughters, Onyinyechi Achime and Akunna Achime, invited him to the business to enable them to collect money from their elder brother, Mr. Eric Achime, based in Lagos.

The sisters have now claimed the kidnap was a desperate bid to raise money for their mother’s eye treatment as their brother had refused to help despite several pleas. One of them said,

“The eye problem became so much and we had no option; we decided to do that in order to raise money. We took her to a hotel at the Camp and paid for a room there. I brought my friend and he helped us in arranging the kidnap.

He was the one calling our brother, but he refused to bring money; he said the kidnappers can eat her if they liked. We did not hurt her at all; it was all for our mum’s good, though we did not tell her.

She got to know later, and she has been begging the police to drop the case. As we speak, her medical condition is even getting worse.”