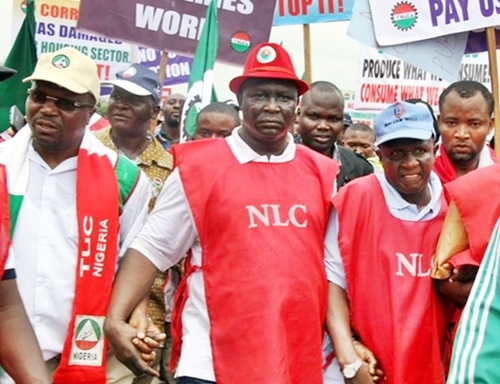 Nigerian labour leaders walked out of a meeting with the government yesterday, May 17th, 2016 claiming they are mobilizing their members for an indefinite strike today, 18th of Wednesday, 2016.

Punch reports that representatives of the Trade Union Congress, TUC who also attended the meeting, however, said the TUC would not join the strike.

Aliyu Wabba, the NLC President led the labour delegation while the Secretary to the Government of the Federation, Mr. Babachir Lawal, led the Federal Government delegation at the talks held in the SGF’s office in Abuja on Tuesday night.

At the end of the meeting, Mr Lawal said:

”It the duty of government to provide security for her citizens and anyone who tries to coerce any worker to do their bidding would be made to face the law of the land. We had full cooperation with the Trade Union Congress of Nigeria and they said they are not going on strike.

”For them, it is a complete return to work tomorrow (Wednesday). It is not the same with the NLC however. They have two factions, one agreed completely with the position of the TUC.”

Speaking with journalists, Wabba said his team arrived at its decision to proceed on strike following the inability of the Federal Government to meet up with its demand to revert to the N86.50 old pump price of fuel.

Some officials of NLC said they were angered by the decision of the Federal Government to proceed to court, despite existing negotiation which was at the instance of the government.

The Federal Government however, has threatened to apply the ‘no-work-no-pay’ rule against workers who join the NLC strike.

The SGF, Babachir Lawal, in a statement on Tuesday, directed all ministers, permanent secretaries and heads of government agencies to invoke the provision of rule against errant workers advising civil servants to shun the exercise in their own interest, which, he said, was called by the NLC despite a ruling of the National Industrial Court, which restrained labour from going on strike on Wednesday.

He added that the government would ensure free movement of persons despite the strike called by the NLC.

The General Executive Secretary of Medical and Health Workers Union, north central, Richard Gbamwuan, also disclosed shortly after an emergency NEC meeting of the NLC held in Abuja on Tuesday, that they were going ahead with the proposed strike.
“We have resolved to go ahead with the protest nationwide, as far as we are concerned, we are yet to be aware of any court injunction.
“And if there is any court injunction, we are just doing what federal government is fond of doing. The same Industrial court had stopped federal government from increasing electric tariff but till date federal government ignored us, they still went ahead, so we are embarking on the protest,” he added.
17
SHARES
Share on FacebookTweet thisEmail to friends
Tags
Babachir Lawal Fuel Hike Mr Aliyu Wabba NLC Strike TUC
13 Comments
jumoke Simi May 18, 2016
Recent Posts