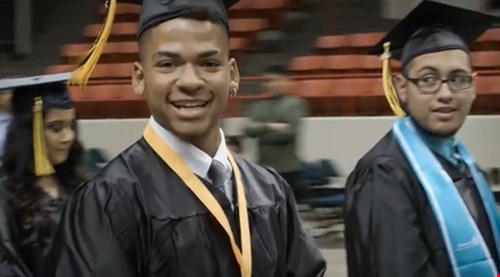 Liyjon DeSilva, a 20-year-old American student who was homeless after his mother’s death, has graduated top of his high school class and won a full college scholarship, Daily Mail reports.

DeSilva’s mother died when he was just five years old, and after years of living with different relatives, he found himself homeless as a teenager, sleeping in parks and on buses.

The 20-year-old said, “It was either be that or a low life. I could have thrown everything away. I have a chance, why not just keep going?”

Despite being homeless for three years, Liyjon attended school regularly and topped his class, sources say. Later, a staff from his high school, Margaret Long Wisdom High School, Texas, USA, observed that he was homeless and decided to assist the young man.

Why This Married Woman, Josephine Afolabi Is Speechless With Joy After 15 Years Of Mockery | Be Inspired!

Jonathan N. Trinh, principal of the high school, was shocked to discover that one of his top students was homeless. He maintained that in his 23-year career, DeSilva stands out as naturally gifted and among the top 5% of students.

According to reports, Liyjon graduated top of his class this year and has a full scholarship to Carleton College in Minnesota, USA.