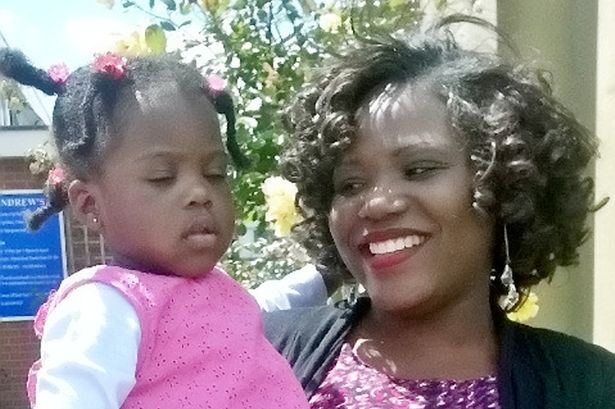 36-year-old HIV positive Ugandan mum and her toddler daughter who had been told to leave Britain may have starved to death in desperate poverty, an inquest heard.

According to Mirror, there is no evidence that Lillian Oluk and her 2-year-old daughter, Lynne Mutumba had eaten for days before they died in their one-bedroom flat.

Following investigations, a harrowing inquest was told there was no medical reason for the mother and daughter’s deaths but various examinations suggested Lillian was suffering from malnutrition and starvation and her tot had been dehydrated as they had no food in the house and no possessions other than the clothes on their back.

It was also gathered that the sick mum was also not taking her medication for HIV and sickle cell anaemia when they were found in Gillingham, Kent, on March 14.

Until the middle of February, Lillian was buying healthy food for the pair of them using a money pass from social services, but this seemed to have stopped by February 14. The inquest was told there was no evidence of the mother having bought any food after February 28.

The sick woman was last seen with Lynne on February 28 coming back from a local church and she was last seen on her own on March 7 when she met her key worker.

When the bodies were discovered, Lynne was in bed and her mum was on the floor of the bedroom. Lillian, from Uganda used to work for LSG Sky Chefs, a company that supplies catering and supplies for airlines, based near Gatwick Airport.

The inquest was told that in mid-February she received a letter telling her she was no longer entitled to stay in the country.

After the inquest, Lillian’s sister Pamela Angole said: “She was lovely, beautiful, bubbly and very cheeky.

“She could make anyone laugh anytime.

“My niece was the loveliest baby you could want ever, I saw her as my third child and we just miss her desperately.”