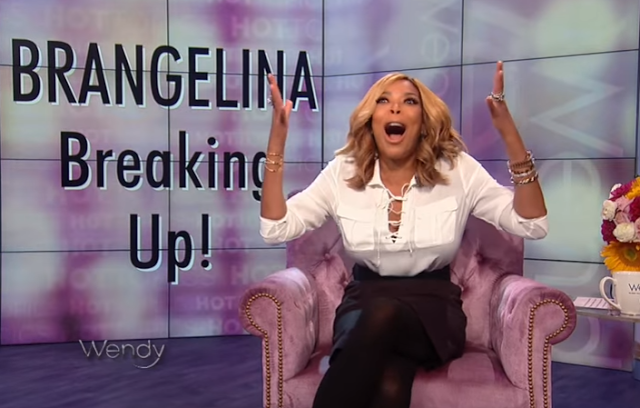 Speaking on her show on Wednesday, Wendy said:

“Well, Angelina, considering how you met Brad, I am sure that you are having plenty of sleepless nights because how you get them is how you lose them. I’m just saying.

I hate to gloat but I’ve never cared for the way they met each other to begin with. You know what? I’ll tell you what.

The nail in the coffin… do you remember in Vanity Fair when Brad and Angelina were promoting Mr & Mrs Smith?

And they took a family-type photo spread and they were in a backyard and they had actor kids in a plastic pool like a family? This was when he was married to Jen! And they were promoting this movie and swooshed it all in her face so WHATEVER!”

We don’t know if any of these rumours are true,” she said referencing the affair allegations, “but what I do know is that I bet you Jen’s best friend Chelsea Handler is probably going to be having a big party tonight, the food is going to be great and everyone is going to be there.”

And she wasn’t wrong because Chelsea took the opportunity to blast Angelina on her Netflix show that same day.

Referring to reports on the divorce, Chelsea said:

“There are reports that part of the problem was Brad was allegedly drinking and smoking too much weed. I wonder why he needed to self-medicate.

Oh yeah, because he married a fucking lunatic, that’s why!”

Maybe because he could have been spending the last 12 years at Lake Como hanging out with George Clooney and Matt Damon, instead of being stuck in a house with 85 kids speaking 15 different languages?”