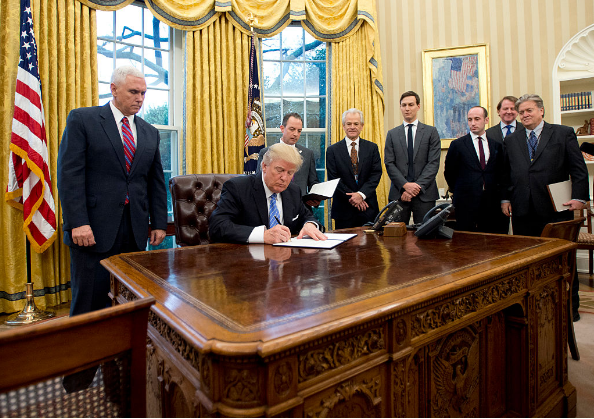 In one of his first official acts as U.S. President, Donald Trump has signed an anti-abortion Executive Order. An order that could restrict women across the world to have access to safe abortion.

The photo of Trump, surrounded by 8 male staffers, shows him reinstating the Mexico City policy, also known as the ‘Global Gag Order’, which was first introduced by President Ronald Reagan in 1984. The policy blocks U.S. funding to foreign organisations that perform or provide advice on abortions, according to News.com.

The president, who has made anti-abortion policy one of his campaign promises, announced the revocation on Monday, in a statement issued by the White House:

I direct the Secretary of State, in coordination with the Secretary of Health and Human Services, to the extent allowable by law, to implement a plan to extend the requirements of the reinstated Memorandum to global health assistance furnished by all departments or agencies.

I further direct the Secretary of State to take all necessary actions, to the extent permitted by law, to ensure that U.S. taxpayer dollars do not fund organisations or programmes that support or participate in the management of a program of coercive abortion or involuntary sterilisation,” the statement read.

The memorandum was not intended to, and does not, create any right or benefit, substantive or procedural, enforceable at law or in equity by any party against the United States, its departments, agencies, or entities, its officers, employees, or agents, or any other person.

The Secretary of State is authorised and directed to publish this memorandum in the Federal Register,” Trump’s statement read.

This came just two days after women led a massive protest march in Washington to defend their rights, including to abortion. 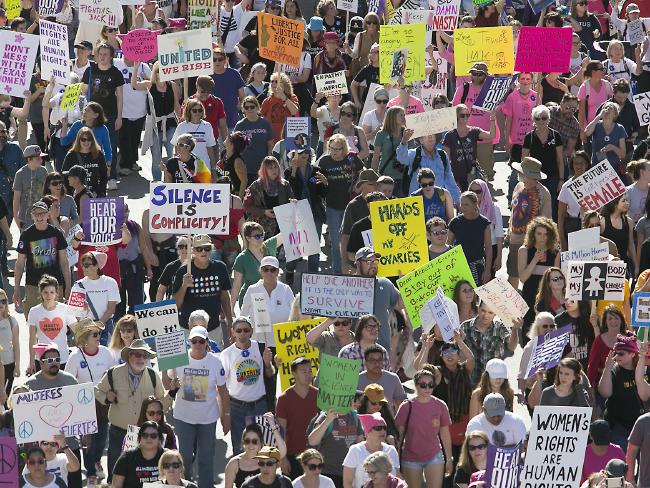 Meanwhile, reinstating a ban on U.S. funding to help women in developing countries access contraceptive services and give advice on abortion could have significant consequences.

The World Health Organisation (WHO) estimates that more than 21 million women a year have unsafe abortions, accounting for 13 percent of maternal deaths worldwide. Since its inception, the Global Gag Order has been repealed and reinstated with each change of power in the White House.

Based on the image showing a group of men witnessing the signing of the Global Gag Order, when none of them will ever feel the practical consequences of restricting access to contraception and abortion options for women, some have taken to Twitter to pen their views. 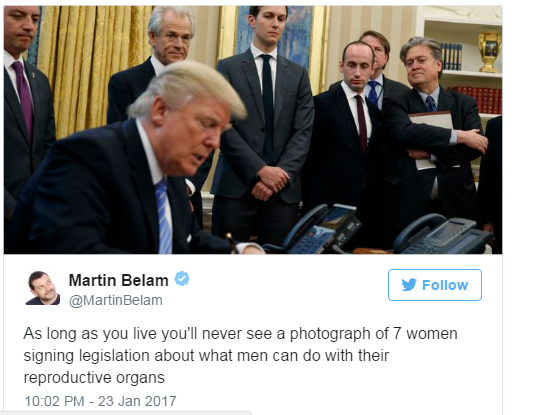