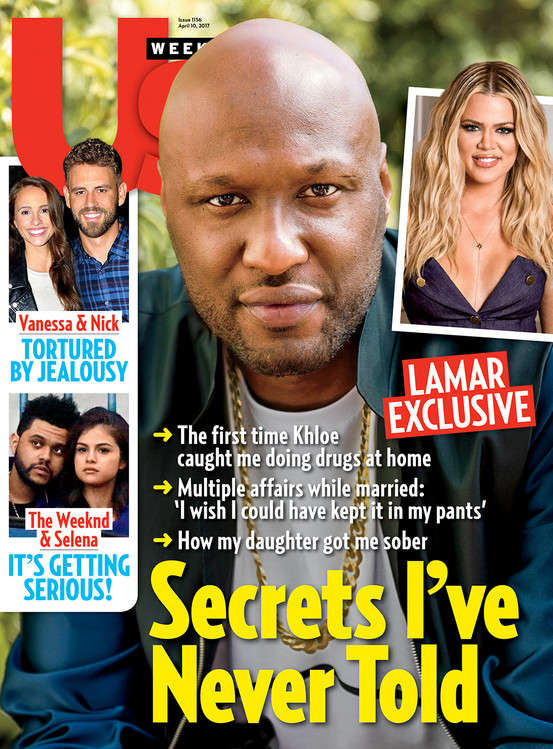 Former NBA player, Lamar Odom opens up about his past drug use and cheating on ex-wife,  Khloe Kardashian in Us Weekly‘s recent issue.

Lamar was also quick to admit that he never treated Khloe fairly.  E! reports that Lamar admits to doing drugs for years behind khloe’s back.

“I was hiding it for a while, but then I got frustrated and was like, ‘F–k it.’ Around two years before we split up [in December 2013], I was in the man cave she had made for me and she caught me. She was disappointed. So was I. The sad thing about it is, I don’t know if I was disappointed because I was actually doing the drug or because she caught me, She knew I was doing cocaine the whole time after that. It was my drug of choice. I’m not going to say she accepted it because that would be the wrong word. Tolerated would be a better word,” he said.

The former star, also revealed in detail, how his life took a downward spiral, after his marriage to the Keeping Up With The Kardarshians star ended.

“I was in a very dark place and very confrontational. I wasn’t trying to repair my marriage; I was just trying to get high. If there is one thing I regret when I was married, it was having multiple affairs with different women. That wasn’t the stand-up thing to do. I wish I could have kept my dick in my pants.”

To read more exclusive details of Lamar’s Interview, how he cheated death and how he is a surviving miracle, go to www.eonline.com.