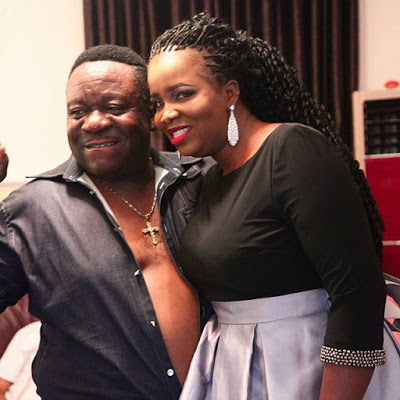 Heartbreaking: Why Children Infected with Meningitis Are Lying on the Floor at Hospital in Zamfara State

In a recent interview with Saturday Beats, the proud father of three said he is unapologetic about flaunting his wife on social media because she deserves it and much more.

When asked why he does it often, he said that it was because of the orientation he got from his mother. He also hinted that in his life, he has never hit a woman because it could lead to his downfall.

”My mother spoilt me so much while she was alive and she also taught me a lot of things. I flaunt my wife on social media because of the orientation I had. Women should be respected and I am one of those that respect women so much. I have never beaten a woman and I believe it is a sin to beat a woman. There is this connectivity between a man and a woman.

God removed a rib from a man to create a woman which means that women are connected to men spiritually. Whenever you raise your hand against a woman, you beat your joy, success, business, peace in your family.

Watch the position of any man that beats his wife and you would know what I am talking about. Praise your wife and tell her how beautiful she is. Buy things to make her happy because her happiness could influence your business. I love my wife with everything I have. I don’t care how it makes people feel but let everybody take example from what I do by flaunting my wife on social media.

Our women need to be praised. I work hard while she stays at home to take care of our children. I don’t regret anything I spend on my wife. If I am outside Nigeria, I always shop for her and I buy things like a blind man because she deserves it. No one can replace my wife because she would always be there.”

Narrating how he and his wife became an item, Mr Ibu said he was always the shoulder she leaned on whenever she had a fight with her boyfriend before things went sour and God brought her to his path.

”My wife has always been in the entertainment industry; she is an actress. She is also a beauty queen. The wooing period was so serious. She had a boyfriend and I was aware of it. They had a quarrel and I was busy settling it. One day, the guy sent her a text message b which made her cry for two days.

In the text message, the guy said she should leave him alone and that if she said should ever come close to him again, he would leave a mark on her body that she would never forget in her life. She kept crying till we met and when I saw her, I asked why her eyes were red and she showed me the text message. I told her to wipe her tears and promised that I would replace him and be better.

Months later, we met in Port-Harcourt at night and I was shocked. I asked her what she was doing there and she said she came because she heard I had a show. She said she wanted to see me and that was why she came. I offered her shelter that night. You know that they don’t leave a goat and yam in the same place; that is how she got pregnant and we got married.”