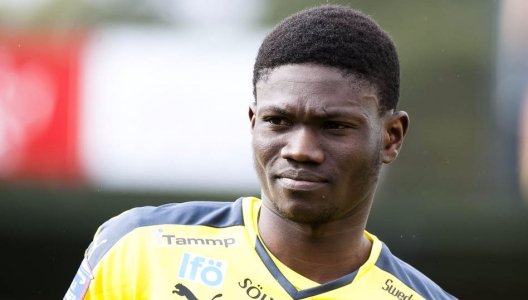 Testimony: What Happened After I was Told I Won’t be Able to Conceive Due to My Infection and Fibroids

Ghanaian football player, Kwame ‘Conte’ Bonsu has been handed a two-year prison sentence in Sweden after being found guilty of assaulting and raping his estranged wife.

The Swedish court found him guilty of the charges brought against him by his ex-wife in November 2015; two years after the event had taken place, The Local Sweden reports.

The court heard that the rape and beatings took place in the couple’s apartment during an evening when he had refused to let her out.

Kwame, however repeatedly denied the charges, but testimony from his wife’s relatives led the court to believe the victim’s version of events.

Kwame first met his estranged wife in 2014 when he was playing in the southern Swedish city of Mjölby and they later got married the following year.

A few months after the wedding, he signed a transfer to the town of Gävle, located about 300 kilometres from Mjölby. His wife had wanted him to stay to continue his studies and this caused serious rift in their marriage.

The 22-year-old midfielder who currently plays for Swedish second division side, Gefle IF, after serving his sentence will also be deported from the Scandinavian country where he has lived since 2013.

Gefle have made a public announcement about the future of the footballer on its official website after the ruling was passed stating clearly that they no longer needed his services.

“Gefle IF player Kwame Bonsu today was sentenced to two years in jail as well as expulsion in Gavle,” the statement read.

He will not, as long as the judgment remains like this, be a player of Gefle IF again since his contract has been cancelled,” the statement added.

According to court documents, Kwame will also have to pay 122,600 kronor ($14,000) in compensation to his wife, who is a Swedish national.

His lawyer has appealed the sentence.