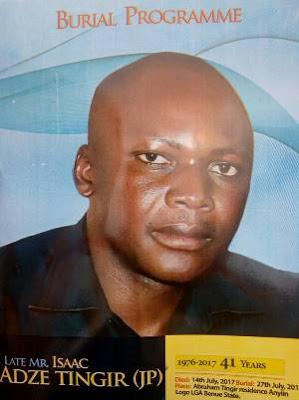 Revealed! Why Princess Diana Feared Losing William and Harry to the Royal ‘Establishment’ Amid Split from Prince Charles

They say ‘smoke can not be covered for too long’!

A Facebook user, Zaki Felix Grm posted photos from the burial of one late Isaac Adze Tingir (JP) and while others were leaving positive comments for the repose of the deceased soul, a comment from Godwin Vereto, left everyone in shock.

“Why are saying rest in peace? Let him come and sleep with peoples wife’s again. Foolish man”

READ ALSO: “I wish I could have kept my d*ck in my pants When I Was Married” – Former NBA Star, Lamar Odom Talks About Past Infidelity & More

Before his death, late Isaac was the Deputy Treasurer, Finance Department Logo LGA. He died 14th July, 2017 and was laid to rest in Anyiin, Logo Local Government Area, Benue State on Thursday.

READ ALSO: 5 Tips On Coping With Your Marriage After Infidelity