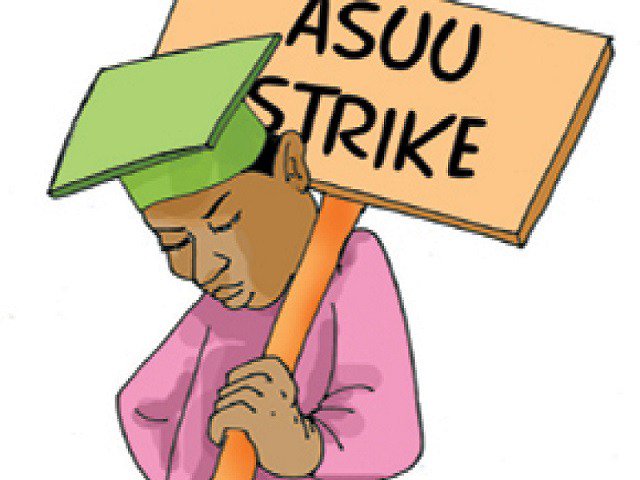 As the indefinite strike embarked upon by the Academic Staff Union of Universities, ASUU, enters its third day, activities on campuses have been paralysed as students vacate hostels.

Meanwhile, the Federal Government of Nigeria pleaded with the union on Tuesday to suspend the ongoing strike in the interest of the students and the nation.

According to Senator Chris Ngige, Minister of Labour and Employment, ASUU should call off the strike because the government was already negotiating the issues in dispute with the association through Babalakin Committee, Vanguard reports.

In a statement signed by the Deputy Director, Press in the Ministry, Samuel Olowookere, the Minister said there was an on-going renegotiation of the 2009 agreement between the Federal Government and ASUU by the Committee.

”The Federal Government has set up the Babalakin Committee on 13th Feb. 2017, which is already addressing the issues raised by ASUU.

Though the Federal Government did not wish to apportion blame, it is important to note that ASUU did not follow due process in the declaration of the industrial action.

As it did not give the Federal Government, the mandatory 15 days’ notice as contained in the Section 41 of Trade Disputes Act, Cap T8, 2004.

The Presidency on Tuesday described the industrial action declared by ASUU on Monday as totally unnecessary.

”This strike is totally unnecessary. The issues can be resolved, especially where we have full understanding of where we are coming from. The governments that signed those agreements did not deem it fit to implement because the capacity was not there.

If they are ready, they can sit down and discuss with the committee that has capable and qualified people as members.”

The Federal Government therefore wishes to appeal to ASUU to consider students who are currently writing degree and promotion examinations. Please call off the strike and return to the negotiation table,” the statement reads.

Recall that the union’s President, Biodun Ogunyemi, declared the strike after deliberations at its National Executive Council (NEC) meeting held at the University of Abuja, over the weekend.

Ogunyemi explained that the government has failed to fully implement the 2009 FGN-ASUU Agreement and the 2013 Memorandum of Understanding.

Ogunyemi added that related demands made by the union have not been addressed, which is why they have resolved to embark on a “total, comprehensive and indefinite strike”.