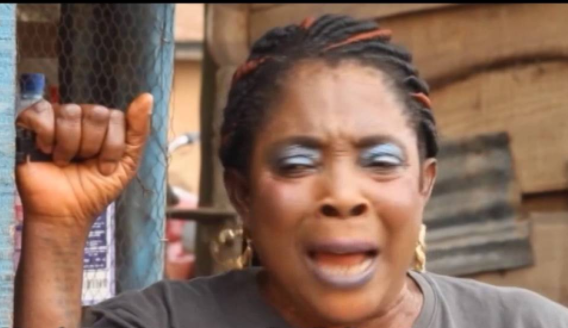 A few months back, Kudirat Odukanmi Eluyemi a.k.a Iyabo Oko was in the headlines after she was declared sick with an unknown ailment some people even thought was rumor.

Well in a recent interview with City People, the vibrant and comic actress who is known for her ‘area mama’ role in most of her movies narrated her ordeal and testimony afterwards.

READ ALSO: Study: Getting Too Little Or Too Much Sleep Linked To Stroke Or Death

”I thank God almighty for sparing my life till this moment. The devil tried his best but God showed him that He is truly Alfa and Omega. What happened was that, that very day, after I woke up from my sleep very early in the morning and I attempted to talk, I just found out that I couldn’t talk any longer and I was told it was a partial stroke.

I was taken to a hospital and I was treated, the doctors really tried their best. The hospital is called 68 Military Hospital, Yaba, Lagos.”

Sharing her recovery process, she added;

”They tried their best but I couldn’t just talk for months but I still give glory to God that I can now talk properly. The funny thing is that, I was not paralyzed; my legs and hands were effective, just that I couldn’t talk. I first spent 2 weeks at the hospital and when I got home, it started again and I returned to the hospital.

I visited the hospital like 3 times. Kemi Afolabi and Sikiratu Sindodo even saw me because she brought her grandma to the same hospital. Kemi was weeping when she saw me, she took good care of me and also gave me money. She also said I shouldn’t drown myself in excessive thinking because many have suffered the same ailment and they are nowhere to be found today.

After many trials at the hospital, I could still not talk, I was discharged and my son came back from abroad, he rushed me to UK where I spent like one  month.

I was at home but doctors were coming to treat me. He employed a therapist and after a month, I started talking and my son finally took me to India where everything was perfected.

I spent 7 months in India receiving treatment at home. I give glory to God almighty that I am now okay. I do exercises frequently, I go out and I do all things, the only difference you will notice about me now is that I am not as agile as I used to be.

I have lost a lot of weight and I love it like that because I now keep fit. I was so scared during those trying periods because there were several bad news coming  from the industry. You hear different stories about Nollywood stars which were adding more  to the illness I was already suffering from. But thank God, Jesus conquered for me.”