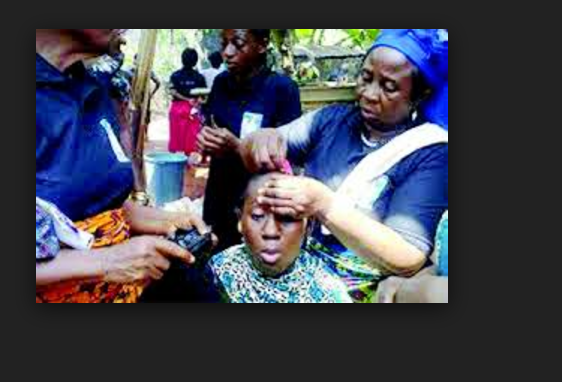 Kenyan Couple Who Got Married in T-Shirts, Welcome 1st Child!

To prove her innocence about the death of her husband, Captain Johnbull Ogheneovo, a widow Stella Ogheneovo, was reportedly forced to drink the water used to wash her dead husband’s corpse by relatives of the deceased.

According to Stella, mother of five, who revealed she had alerted police authorities over her plight, the incident took place at Emervo in Isoko North Local government area of Delta state after her husband died intestate on 9, May 2017 at Warri, Delta State.

In her bid to seek justice for the brutal treatment, the widow said she had petitioned the Assistant Inspector -General of Police, Zone 5, Benin, Mr. Muhammed Abubakar, through her counsel, Mr Olayiwola Afolabi. 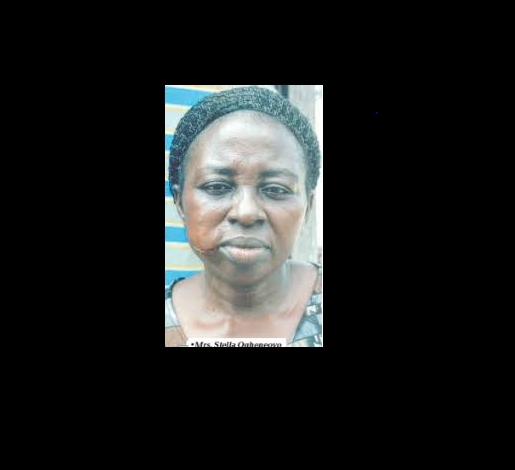 Read her touching story according to Vanguard;

”In the petition, Mrs Ogheneovo alleged that when her husband died, she was invited by her husband’s relations to their family house at Emevor village and was forced to disclose her husband’s assets, property, bank details including information about the company where her husband worked before his sudden death.

Stating that she was legally married to her late husband and the marriage was blessed with five children, the widow narrated that on the day her husband died, she received a call from her husband’s office that he had slumped and had been taken to the hospital.

READ ALSO: Bitter-Sweet: Widow discovers she is pregnant on husband’s funeral eve after a seven year struggle to conceive

She disclosed that during the funeral rites which commenced with a service of songs on the 29th June 2017, a member of her husband’s family, a Reverend Father with the Roman Catholic Church (name withheld) came with thugs to harass and intimidate her and her children adding that she was given over 30 strokes of the cane by the thugs.

She said that the said Catholic cleric also threatened her that if she did not declare the assets of her late husband to the family, he would deal with her.

According to her counsel,

“Our client was forced by the same family member in the presence of other family members (names withheld) to drink water from an unknown source claimed to be the water used to wash the corpse of her late husband to prove her innocence about his death.

As a result of the substance forcibly taken by our client under duress, she was admitted at the hospital due to poisoning which caused her severe stomach ache. The same family member warned her to desist from further interference in their family matter and never to attend the burial. It is imperative to note that our client’s late husband was buried without his legs as they were allegedly amputated based on the instructions of the same family member.”

She told the AIG that it was through the first son of the late Captain Ogheneovo, Master Shedrack Ogheneovo, who saw his father being buried without his legs intact, that she got to know that her late husband was amputated and the gory sight had continued to have a devastating effect on her son till date.

READ ALSO: Sad Story of a Widower Whose 11-Year-Old Pregnant Daughter’s Health Might be in Jeopardy

However, she said that despite several attempts to curtail the excesses of the said Priest who now posed as the next of kin to her husband, he (the priest) has sworn to take over all her late husband’s property and assets despite the intervention of a monarch from the area who had pleaded for settlement.

She said that appeals were made to the Bishop of the Catholic Diocese of Warri, the first Lady of Delta State and the International Federation of Women Lawyers (FIDA) over the inhuman treatment meted on her and her children.”As of today, our client and her children have been chased out of the solace of their home by the Rev. Father, who is acting in connivance with other family members.

Our client has suffered serious molestation and gross maltreatment in the hands of the said Rev Father who is bent on making life miserable to our client and her children and frustrates all her attempts to expose his selfish evil acts.”

Legal action Mrs. Oghenovo said that several legal actions have been instituted against her by the family members with the aim of shutting her and her children from having a say in the sharing of her husband’s estate.

She, therefore, called on the police, all relevant government authorities, Civil Societies and human rights organizations to intervene in the matter to ensure that she and her children get justice.

In his reply, the Reverend Father who was accused of masterminding the widow’s plight wrote through his counsel, Jonathan Ekperusi to Mrs. Ogheneovo’s counsel, Olayiwola Afolabi that, “Contrary to the malicious and false impressions created in your publications under reference, none of our clients humiliated, intimidated, assaulted, maltreated and/or threatened your client, Mrs. Stella Ogheneovo.

“The incessant attacks by your client on our clients, especially against Very Rev. Fr. (Dr.) StephenOgheneovo is motivated and driven by greed geared towards hoodwinking our clients to allow your client appropriate to herself alone all the properties of Captain Johnbull Ogheneovo (deceased), to the exclusion of Mrs. Best Oghale Walter (nee Ogheneovo), the eldest child of the deceased.

Mrs. Best Oghale Walter, was not born out of wedlock, but was already a child of the deceased long before he met and subsequently married Mrs. Stella Ogheneovo.

“Our Clients believe that it is in a desperate attempt to cover the truth about the actual cause of death of the deceased and to distract our clients from seeking investigation of the matter that Mrs. Stella Ogheneovo has resorted to the violent media attack on our clients, especially against Very Rev. Fr. (Dr.) Stephen Ogheneovo. Very Rev. Fr. (Dr.) Stephen Ogheneovo is not the head of the Ogheneovo family of Emevor and did not preside over the burial arrangements of the deceased.

“Therefore, he could not have done any of the things alleged against him by his late elder brother’s wife, Mrs. Stella Ogheneovo.

Mrs. Stella Ogheneovo has been changing her story from being forced to ‘drink the water used in bathing the corpse of the deceased’ as contained in some media publications. To further disparage and distract our clients, Mrs. Stella Ogheneovo has gone further to wickedly and maliciously allege against our clients, especially against Very Rev. Fr. (Dr.) Stephen Ogheneovo, that they amputated the legs of the deceased before he was buried.

Whilst openly fighting our clients, Mrs. Stella Ogheneovo has been sending emissaries behind the scene to appeal to our clients.

“For the records, our clients briefed us that they did not give (not to mention force) Mrs. Stella Ogheneovo, the water used in bathing the corpse of the deceased, and that the entire story was a gross misrepresentation of facts, calculated to vilify, embarrass, harass and humiliate our clients as part of a grand plan by Mrs. Stella Ogheneovo and her cohorts to chase away her husband’s family members in order to effectively disinherit her husband’s eldest child, Mrs. Best Oghale Walter.

Our Clients are pained that Captain Johnbull Ogheneovo, who was doing very well as a businessman and maritime captain died suddenly on 9th May, 2017 barely two (2) days after he visited his sick mother at the Central Hospital, Warri where he even contributed money towards the mother’s treatment.”

When contacted, the Public Relations Officer of the Zone 5 of the Nigeria Police, Benin, Mr. Emeka Iheanacho (DSP) confirmed that the zone has received a petition by Mrs Stella Ogheneovo through her counsel.

He disclosed that the Rev. Father in question was invited by the Zonal Investigation Bureau and made his statement adding that the ZIB has commenced investigation into the allegations levelled against the clergyman.