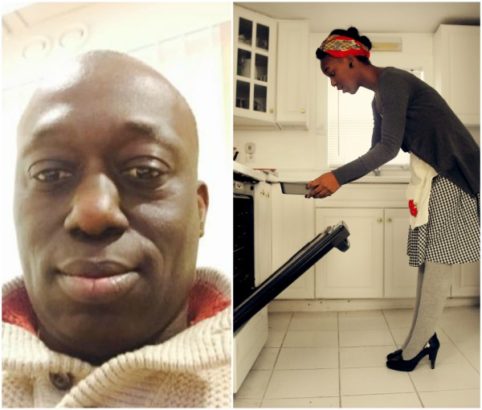 Dear Mimsters: I Fear I Would Soon Become a Disgrace to My Family

Olusola Adio, a Nigerian Evangelist based in the U.K has taken to social media to share his thoughts on why being a full-time housewife is the most resourceful and underrated profession.

According to Adio, being a wife means being a driver, nanny and a lesson teacher and only a wife and mother can put in her best into those 3 jobs for her children.

He argued that drivers and cooks can molest or kidnap children, but a full-time housewife cannot do that. In addition, he noted that no one else, can be that faithful or loyal towards children except the housewives.

In his opinion, if men paid salaries to their wives who opted not to work and secured their individual financial futures, we will have a sane world out here.

Here are his tweets;

In the UK, a housewife who never went to the office successfully took 50% of her husband’s fortune in a divorce case. She was able to argue that she spent her working life, doing 3 jobs at home.

If both spouses worked full time, you must pay through your nose for those services. On top of the money you pay, quality is not guaranteed.

Only a wife and mother can put in her best into those 3 jobs for her children. No one else can be that faithful or loyal towards children.

Drivers and cooks can molest or kidnap children. Your wife cannot kidnap your children. So you cannot even put a monetary tag on what your wife does for your children because she does it with her whole being and heart.

If men paid salaries to their wives who opted not to work and secured their individual financial futures, we will have a sane world out here.

READ ALSO: “Girls are much more emotional but boys are just easier” – TV Personality Michael Strahan Opens Up on Parenting

A financial expert once did a calculation of what a housewife brought to the family table financially in the United Kingdom. I was stunned.

This financial expert reckoned that you would pay £500K per annum to a person who did all the housewife’s work with the same loyalty.

No nanny, driver, cook, houseboy can ever be as loyal and dedicated to your children as your wife who chose to sacrifice her career for them.

I am not tweeting here to recruit housewives so if you deliberately misinterpret me and insult my parents, I’ll block you instantly.

Point here is if a woman sacrificed her career to raise your children so you can work with peace of mind, don’t make her regret it.

Shoutout to mothers who opted to sacrifice high-flying careers to raise their children. I love you and respect you. May you reap the profits.

My Submission to woke men out here is that you owe your housewife that you diss, £500k per annum. Honour and respect her for the sacrifice.

#MyOpinion no woman must be told to sacrifice her career for children. If it happens, it must come from her and don’t make her regret it.”