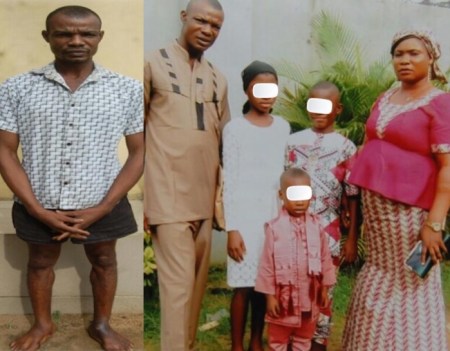 This is not a pleasant news to report this morning but we cannot ignore the increasing spate of domestic violence in Nigeria.

The Akwa Ibom State police has arrested a man, Sunday Akpan of Eda Street, Uyo, for killing his wife, Mrs. Martha Akpan and dumping her remains at a refuse dump.

According to the state Police Public Relations Officer, DSP Bala Elkana, investigation revealed that the incident occurred on October 11. He explained that Akpan had a misunderstanding with his wife, which led to a fight on the day;

“Later, the suspect at midnight cut her remains into pieces, packed them in two sacks, put them in a wheelbarrow and poured them into a waste bin near NDLEA’s office, off Nwaniba Road, Uyo.

The suspect killed his wife in the presence of their children, who thereafter reported to the police, for fear of being murdered by their father.

During interrogation, he confessed to the crime.”

The police spokesman said the suspect perpetrated the act in the presence of his three children, who later reported the incident to the police.

“The suspect has owned up to the crime and investigation is ongoing,” the PPRO added.

How could this father do this evil in front of the kids? We hope those kids get the care and counseling they need to recover from this.