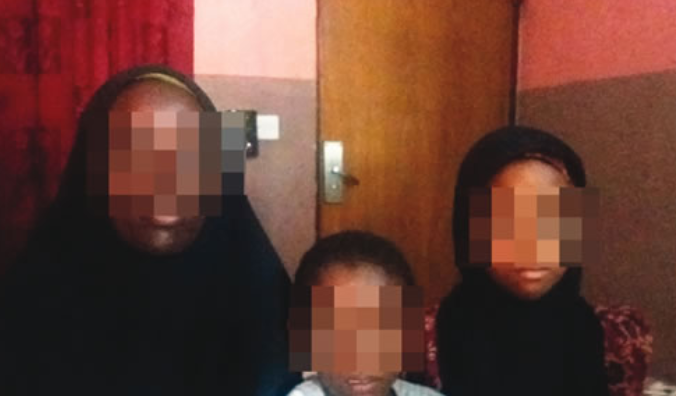 Rakiya Zuberu, 35, was infected with HIV by her late husband. Rakiya, who has three children says two of them are HIV positive.

Rakiya, whose hands were given out in marriage by her father at age 15, claims she has been living with HIV since 2008.

The jobless troubled woman who now begs to survive, shares her ordeal with Punch.

Read her story below….

Tell us about yourself.

I am from the Igabi Local Government Area of Kaduna State. I am 35 years old. I got married at the age of 15. It was not that I desired to get married at that age.

As a little girl, there was little I could do to stop the marriage. My father had the final say. Shortly after I was born, my mother parted ways with my father; so, she left me with my father. I lived with my father and my step-mother.

I have three children. Two of them are HIV positive.

Did you attend school?

No, I didn’t. Nobody saw any need why I should go to school. None of my parents’ children attended any formal school. I don’t know what it means to go to school.

When did you discover you were HIV positive?

It all started with a strange sickness in 2008. I was rushed to a hospital. The doctor said an HIV test should be conducted on me when they could not understand what was wrong with me.

Initially, when they did the test, it showed that I was HIV negative. But I was diagnosed with tuberculosis. So, I started taking drugs for TB for a period of six months. After that period, I felt better. Then I got pregnant with my second child. I didn’t have money to pay at the hospital. There was a health worker close to my hospital who helped me with the delivery of my child at home.

But during the pregnancy, I was always falling sick. When the baby was about three months old, I fell sick again. I started coughing blood. I went to a local chemist where I was given drugs to heal the pains. I finished the medication and went to the chemist for more.

The chemist knew there was more to my illness so he told me to go to a hospital for assistance. It was at the hospital that another test was conducted which showed that I have HIV.

At the hospital, I was asked to bring all my children for a test. The same day, the children all tested for HIV. My last two children have the virus. I was told to begin two-month treatment. I could not afford to buy the injection so I didn’t complete the treatment. That was in 2008.

How many wives did your husband have?

My husband was married before he took me in as his wife. But the first wife left him. After then, he didn’t marry any other person.

How did you get HIV?

In 2005, my husband fell sick. We took him to a hospital in Zaria, Kaduna State, where he was treated. He came back home feeling better. But after some time, the sickness returned. That was when he got tested for HIV and it showed he was positive. He said he didn’t believe he could be infected with HIV.  Although he knew his status then, he didn’t tell me.

Doctors said he had a kidney problem and that he needed to do a kidney transplant. He sold half of his plot of land. From Kaduna, he was referred to the Ahmadu Bello University Teaching Hospital, Zaria. He was placed on oxygen. He got better but later went into a coma within five days.

After he regained consciousness, he insisted that he did not want to stay any longer at the hospital. After five days at the hospital, we brought him back to Kaduna. He didn’t spend up to a month. He died at home.

What did he tell you before he died?

Before he died, I had suffered a lot. I was so exhausted after bringing him back home. He called me and sat me down. He told me he needed to tell me something important. He told me he knew he would die any moment from then. He said he needed to seek forgiveness from me on a matter. I was curious; so, I asked him to go ahead.

“Please forgive me for all I have put you through. I knew I had HIV but I am sorry I didn’t tell you.”

I told him there was no need to beg me for forgiveness. I complained bitterly about my sufferings and what life would be for me if he dies.

“Anybody that comes to this world must definitely die.”

When he died, I felt bad.

How have you been surviving since his death?

It has been continuous suffering for the past nine years. Most times, my children and I skip meals to survive. It’s becoming unbearable for my children. Most times, when I run into a crisis, I would start crying. Sometimes, I think about killing myself because the suffering is much.

Sometimes, I ask myself the essence of my life. Sometimes I say, “Why don’t I just die?” But anytime I survive the crisis, I would become remorseful for thinking about killing myself. But most times, I feel death is the best way to end the problem.

My children are not in school. I would rather use the little money I get on the street to feed them than think of enrolling them in a school.

Apart from not attending school, the children are malnourished. Sometimes, they stay for 10 days without bathing with soap. Sometimes, we stay for weeks without washing our clothes because rather than use the money to buy soap, we would rather use it to buy food. My daughter’s limb is paralysed as a result of complications from HIV.

Fatimah is about 13. Abdulazeez is over eight years. Fatima likes school and would like to go to school. The ARVs are free in the hospital but other drugs are not. Even though the ARV is free, sometimes, I don’t have the money to go to the hospital to get it. I used to go to a mosque in Tundun Wada and a market to beg for alms.

I want my children to be educated. But there is no money to do so. If there is any way my children can get help to go to school, I would be very grateful. Even if they cannot go to school, at least if I am able to feed them, I would be happy. I used to go to the villages before to buy maize and sweet potatoes for sale. But now things have been so hard that I can’t buy farm produce any longer.

Why didn’t you seek assistance from your family?

When I tested positive to HIV, I went to my father. I told him about my plight. He said I should ignore the diagnosis, that if I had HIV, I would have died immediately after contracting it.

He simply told me there was nothing like HIV. Since then, I stopped going to him again. He killed my spirit.

Do you experience any stigma as a result of your situation?

One of my friends is HIV positive. At the hospital, they gave us one handbill with the inscription,

“HIV does not kill.”

She showed people her handbill and since then, people started running away from her.

She was so sick that I was the only person going to visit her. The woman got better. I realised that if I disclosed my status, it would only worsen my problem as people would run away from me as well.

Why didn’t you remarry after your husband’s death?

After my husband died, some men showed interest in marrying me. I told them my children were still very small. Besides, I didn’t want to disclose my status. One particular man came and insisted he wanted to marry me.

I told him he could not marry me. He wanted me to tell him my problem. I told him I was sick. He said no problem, that he would marry me despite the sickness.

He insisted on knowing why I said I could not marry just any man. I refused to tell him. Then he started mentioning names of sicknesses one by one until he mentioned HIV. When he mentioned HIV, I said yes.

“No problem. I will marry you.”

But from then, I never heard from him again. Nobody wants to marry an HIV positive person. Since then, nobody has come to ask for my hand in marriage. I will like to get married because I’m still young.

What lessons has your illness taught you as a mother?

I have gone through a lot in life. I wish my husband told me his HIV status and began treatment early enough. He wouldn’t have died.

Also, we were told during the counselling sessions at the hospital that if more women knew their status, they could protect their children from contracting the virus when they are pregnant. I never knew all these.

I gave birth to my children at home. I regret that my children have to live with the virus and go through the pain of taking drugs every day. I want to advise more women to know their HIV status.

That way, they can protect their unborn children. There is still a lot of ignorance in Kaduna about HIV. The government has a lot to do. All I want in life is to see my children succeed and never to suffer.  My prayer is to get a drug that will cure HIV. I appeal to people in government to help me.