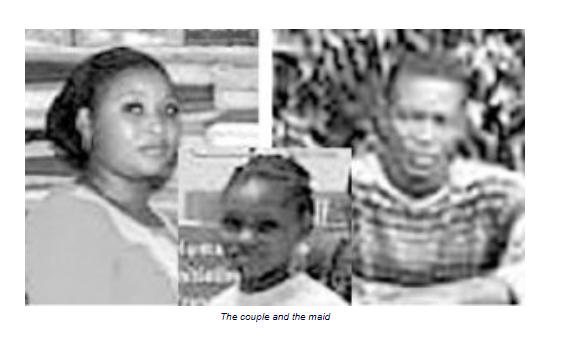 A heartbroken wife has narrated how her husband of 13 years, an ex-banker who she had a daughter with, ‘descended so low’ to sleep with their maid each time she went on a business trip.

The jobless hubby also allegedly went to the extent of getting the maid pregnant as he accused his wife of starving him of sex, Sun News reports.

Mr. Joko, from Toto Local Government area of the state, and Franca, got married in December 2005, some months after graduation. Together, they joined the marketing department of the local branch of United Bank for Africa (UBA) but left after three years to set up and run their own business.

Resigning and raising the business capital

But today, after almost 13 years of marriage blessed with one child, a girl, the union had virtually hit the rock. In a tearful voice, Franca told Saturday Sun what happened.
After resigning from UBA, she said: “we put together our resources and I started the business of selling and supplying high quality wrappers to politicians, business executive officers, bankers, businessmen and women and civil servants. Through this connection, I started traveling to Dubai to buy expensive and high quality materials.
“I advised my husband who is not working to use proceeds from the business to buy a plot of land in Lafia and build a house. He bought into the idea and we were able to get a piece of land at the cost of N1m. From that moment, I started sending money into his account to start the building while I devoted myself to the business.

READ ALSO: Dear MIMsters: Am I To Blame For My Husband’s Infidelity?
Marriage and the coming of housemaid

“I got married to Emma because I was under pressure from my parents and friends who had gotten married early and when I met him in school, he seemed to me as a gentle and good man, meek, intelligent and caring.
I was intrigued by his ingenuity. If we had dated long I would have discovered some of the characters he is exhibiting now.”

She said that it was when they got married that she discovered that her husband had a tendency to be promiscuous. He can sleep with anything in skirt, no matter how ugly and unappealing, she alleged. But by the time she did, she was already eight-month pregnant for him. She was later delivered of a baby girl in February 2007.
She said while she endured life with Emma, providence smiled on her as the business began to flourish. It was in the course of this that she discovered she needed a house help to take care of her child and home while away.

She contacted her mother on this and she provided her with one of her (mother’s) younger sister’s daughters who is now about 18 years old. Faith by name, Franca said she completed her secondary education with them in Ado, Karu Local Government area of Nasarawa State where they reside.

READ ALSO: ”If Your Husband Sleeps With Your Friend or Housemaid, Don’t Quit” Liz Anjorin Bares Her Mind on Infidelity
Sowing the ‘seed’ of discord

“I’m not always around due to the nature of my business,” she confessed, “but I do send money into his account for the building of our house in Lafia.
But when in July 2017 schools were on holiday, he suggested that their daughter, Joy, who is 10 years old should travel with him alongside Faith to Lafia as a way of changing environment, while he is busy supervising the ongoing work on the house (a four-bedroom flat and three-room boys quarters).”
According to her, that was when the devil that was after their marriage chose to strike. “It never occurred to me that he would descend so low as to lure Faith into having s*x with him.
But that was exactly what happened and between July and early September 2017 when they were in Lafia and I was in Dubai for a business trip, he turned this girl into his wife by having s*x with her at will.
Eventually, she became pregnant. When I returned and Faith narrated to me what happened in Lafia and Emma got to know about it, that became the beginning of the end to our happiness.”

Right from that moment, life has never been the same in the family, Franca said. “Any small thing I did, this man would beat me blue and black,” she alleged.
”He became so aggressive and threatened to stop the business I was doing, saying that it is the money I am getting from it that is making me to look down on him.
He made a lot of attempts to stop the business but I strongly resisted him. Even when Faith told me she is pregnant for him, I asked him politely in the night to tell me what happened.
“Unknown to me, more troubles lay ahead for me. It is a miracle that I’m alive today. During the last trip I made to Dubai, I paid about N4 million into his account to furnish the house and fence it round.
When I asked him about the Faith matter, he started beating me, hitting my head against the wall and punching my breast just because I asked a simple question.
“He would say that at the rate the money is coming in he suspects that I’m into prostitution and that it is getting into my head. He said that he needed to stop me. On September 15, 2017, when I went to Port Harcourt on a business trip, he picked Faith and dropped his daughter with a neighbour on the day I told him I was coming back.”
Right now, they are living as husband and wife, Franca reported. “When I called him on phone, he told me to go about my business of prostitution as he has settled down with Faith who is pregnant for him. Since then he has never picked my calls up till now,” she lamented before adding that she has reported the matter to her parents and Emma’s.
Both of them asked me to be calm and never call him any more. While confessing that such attitude is strange to them, they advised that we should all be patient to see what he wants to do.
I have accepted it and I am waiting to see what he intends doing with my younger sister who is pregnant for him. My regret is that they are enjoying themselves with my hard-earned money.”

READ ALSO: “The numbers don’t lie”- Torrei Hart Talks About Her Ex Kevin Hart’s Infidelity
Husband speaks on why things are no longer at ease

Initial attempts to meet with Emma and hear his own side of the story proved abortive as he kept making and changing appointments till Friday November 3 when a correspondent met him and his new ‘wife’ at Lavista. One of the best eateries in Lafia, located around Nasarawa State Polytechnic.

Though he vehemently refused to have his photo taken, he confirmed that Franca was his legitimate wife, and that they met at the Federal Polytechnic as students and that he was instrumental to their brief stay in UBA as staff in the marketing department

“We raised together the capital of that business she is doing,” he said. “I have two cars in Abuja which I gave out as taxi and I get returns on them weekly. Yes, she gave me money to buy a plot of land and developed it from the proceeds she generated from the business. Though the land was bought in my name, I’m not claiming it solely because we have a daughter. The property is intact for her if she wants it.”

Asked about his sexual affair with Faith, he said, “Yes, this girl became pregnant courtesy of me but it was a mistake. But before I knew it, she had told all her friends and neighbours about it and I was mad. We couldn’t manage the information because it was already in the public domain. As a result of it, the two of us became subject of discussion and I got angry and decided that the worst should happen.”
Still talking about Faith, he announced that “she is in good and safe hands and I will own up to the responsibility of this pregnancy until she delivers. After all, she (meaning Franca) had just a baby girl for me. So if she is not ready, she can go.
“She kept traveling from one place to another; we hardly had time to have s*x and as a human being, that led me into taking that decision. I know it is bad but she didn’t allow us to manage it internally and the manner she went about it made it difficult for us to think about abortion.
“Her property is intact for her. I have not taken it and will not take it. I’m waiting to hear from her parents. I won’t go there until Faith delivers in April next year.”
Speaking briefly, Faith said: “I go by what he said.”