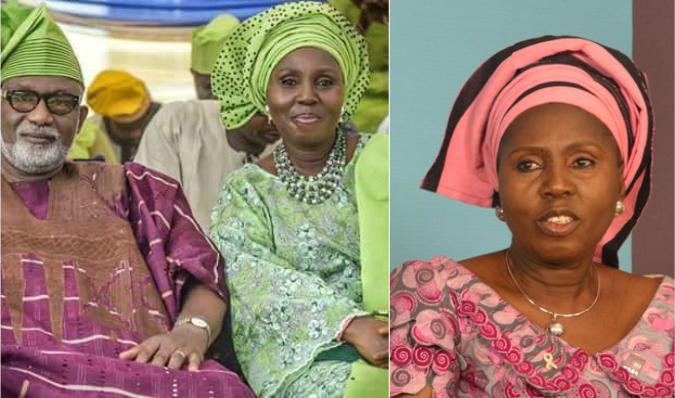 First Lady of Ondo State Betty Anyanwu -Akeredolu, has once again spoken on how she survived breast cancer 20 years ago, disclosing that she only has one breast.

In an interview with Punch, Betty, who is the founder of Breast Cancer Symposium of the Breast Cancer Association of Nigeria, BRECAN revealed how one of her breasts was removed in order to survive cancer.

Betty was diagnosed of cancer when she was about forty-two or forty-three.

Describing her encounter with breast cancer, she narrated;

I am a breast cancer survivor, 20 years now and still counting. It all started in 1997 when I was diagnosed with it. I never knew anyone who had that experience and the little information I got from the cable television stations wasn’t something we were familiar with.

That morning when I felt something in my breast, of course, my mind raced to breast cancer because of where the thing was located. I was scared because I didn’t know what to do. It happened when I was resting at home during my annual leave. It got me thinking of what to do if it turned out to be breast cancer.

What thought came to your mind when you discovered it was cancer?

My little children came to my mind; I thought of what would become of them.

I kept it to myself for almost one week. I didn’t know what to do. My baby was four years old or thereabout. I tuned to television one morning and what I heard was a programme being advertised that it could save one’s life.

Immediately I heard that, I just stood up from the bed and sat down, wondering what the programme was all about. It happened to be a programme about a breast cancer survivor’s journey. I cannot explain such a coincidence.

It really saved my life. There was this white woman on the show and it was her journey through breast cancer that was on air.

She happened to be the mother of popular Hollywood actors, the Bubbling Brothers; they are popular in Hollywood. She went through the treatment and then called herself a survivor. She was sharing her experience to the world.

She used the chronicle of her journey to lift up the spirit of those undergoing such experience and I benefitted from it. That was how I summoned the courage to go to the hospital. I said whatever this woman did to survive and ensure her story’s positive impact on other women suffering from same ailment, I am going to be like her.

It was after the examination that the doctor again confirmed there was a lump. Even at that stage, he didn’t know what it was.

I want to quickly emphasise something; it is part of the awareness campaign on breast cancer – that when a woman notices a lump in her breast, she cannot say what that lump is until she sees a doctor.

It is the doctor that will recommend a test. It is after the test that she can know whether what she has is breast cancer or not.

When I told my husband, he was scared but he didn’t know that I had been fortified by the TV programme I watched.

I think he must have wondered where I got the strength because I was on my feet and already prepared that whatever that woman did , I was going to do it and be okay. From then, my treatment commenced.

The next line of treatment was mastectomy. By then, the level of my breast health care was at the rudimentary level. That was in 1997. It was still the same radical mastectomy; I said remove the damn thing if that would make me live. We did that and the rest is history.”

What motivated you since many women may find it difficult to take the bold step you took?

Like I always tell women, surviving breast cancer is all about attitude. If you lose it, it can be very difficult because some women, immediately they are told they would lose their breasts, are already gone.

Some of them will say, their husband may marry another woman with two complete breasts. The man shouldn’t be on the radar; rather, the women should be more concerned about their children. They must do everything to live and take care of the children because they can not tell the character of the woman that their husbands would marry.

Some women reject mastectomy and run to a pastor who will be giving them holy water or Jerusalem oil to rub on the affected part because they don’t want to lose their breasts; but at the end of the day, they return with decayed breasts.

Is it not better you lose breast and live and be well for your children and husband than be preoccupied that your husband will leave you and marry someone else? You have to live before you talk about enjoying marriage.

One comes first before the other. Being one-breasted doesn’t really define you. Like I told a woman, when your husband first saw you, he never saw your nakedness. Even after mastectomy, you can still have a baby; yes, you can breastfeed with one breast. But you must be alive to do that.

What is your view on the belief of many that it is better to seek medical help abroad when diagnosed with breast cancer?

I had a successful treatment and everything was done at the University College Hospital, Ibadan. That also brings the point that the country doesn’t know what it has because we have everything to make this country great.

I think those that are taking the decisions are the ones not talking highly of what this nation can be. When I had the surgery, there was petrol scarcity.

We bought fuel in jerrycan and went to my consultant to give him to use because I needed to get the treatment done. I was lucky mine was found at stage one. It took me one week and I went to the hospital. There were other women, because the symptom wasn’t painful, they carried on not knowing that they were delaying something dangerous.

Do you think there is enough awareness about breast cancer at the grass roots?

Awareness is not enough because you need to first let them understand the behaviour of the disease. If you don’t explain to them, they will keep thinking it is juju and spiritual attack.

We need to have robust awareness and consistency too, like what was done to HIV/AIDS. I think we should bring breast cancer to that level and keep talking about it.

A woman must be familiar with her breasts. If she is not familiar with how her breasts look, there is no way she can notice any unusual change. When you tell our women to do this, they will tell you ‘God forbid’ and that they are covered by the blood of Jesus.

We must figure how to explain it to our women, especially those who didn’t receive much education. We need to bring it down to our people so that they don’t have to waste their time at prayer mountains: science is science. We can still break it down to the language they understand.

In China, everything is expressed in Chinese and it is the same thing with most Asian countries. The science that is being taught in English, they translate it to their local languages. Nobody should think that breaking down science in our local languages is difficult.

It is not, we only need the political will so that people can understand what is going on and take advantage of knowledge.

That is why people like us, who survived and still living productive life, need to put our faces on breast cancer so that people can know that they can survive it. It is not a death sentence. I don’t think anyone should die of breast cancer again.