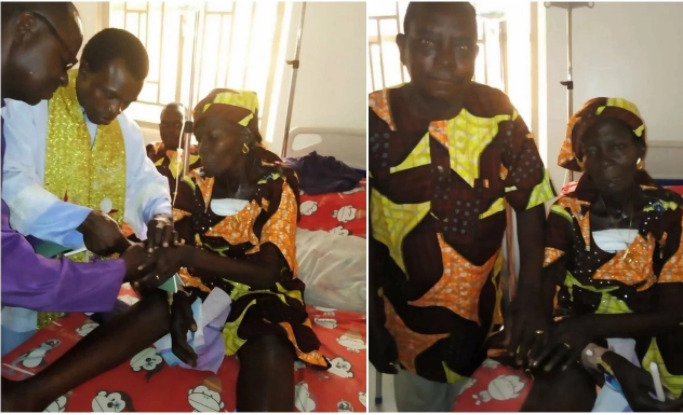 Days After Calling Out Ogbonna, Kanu Nwankwo and Wife, Amara Unfollow Each Other on IG

On Sunday, January 21, a Benue-State based couple, Atule Kile Gunduor and Bridget Gunduor officially tied the knots after cohabiting for 50 years and birthing 8 children.

The couple tied the knot at the Foundation Memorial Hospital in Markurdi, where the wife is currently being treated for breast cancer.

Bridget Gunduor reportedly began battling breast cancer in September 2017. She married the love of her life and father of her children after the cancer reached a fearsome stage.

It was gathered that the beautiful ceremony was attended by family and friends of the couple. It was also officiated by a priest.

READ ALSO: Why Elderly Couple Finally Say ‘I do’ After Living Together for Over 65 Years | See Photos

The priest, who noted that there is nothing like a specific time to receive God, urged them to live happily now that they have been wedded before God.

According to the Facebook user identified as Ukan Kurugh who shared the love story, the couple did everything necessary to make their union official. They shared marital vows and signed a wedding certificate.

Kurugh also urged people to provide financial assistance to the newly wedded bride to help her get proper treatment.

Read the couple’s story below:

“Mrs. Bridget Gundor who for a couple of Months (September 2017 till date) has been at the Foundation Memorial Hospital, Makurdi due to breast cancer complications that has reached a regrettable level today, January 21st, 2018 wedded the love of her life, Mr. Atule Kile Gunduor, with whom they have been married for over 50 years and have raised 8 children out of whom 4 are living.

The occasion which took place at the Foundation Hospital earlier today was attended by family members, well-wishers and admirers. The in-pains woman and her aged husband were joined in holy matrimony and blessed.

In his sermon, the priest explained that, no time was late to come back to God and that, though the couple had lived together for a golden age without being wedded, it was only right to grant them the sacrament now that they were ready for it and urged them to live happily.

It was indeed a pathetic show of emotions as the couple exchanged marital vows and did the necessary as regards wedding. They signed the wedding certificate and received ovation from those who were present.

Indeed, they fulfilled the age long adage that, “it is never too late to do the right thing. Meanwhile, Mrs. Bridget’s breast condition has reached a fearsome level where survival is hardly contemplated.

I urge you all good men and women of the earth, to come to the humble woman’s aid so that, her walk on this stage can be elongated and made more meaningful.

You have always done me proud and I believe strongly that, even at this instance too, help will to come. May God bless us all. Happy Married Life to the latest couple in town.” 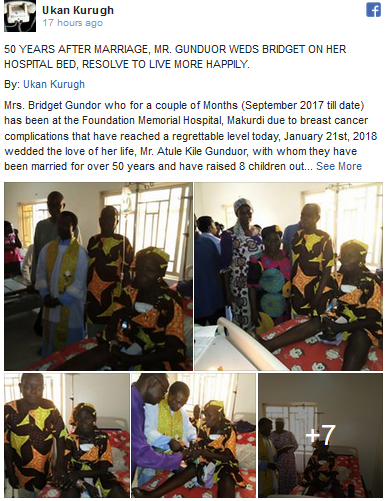