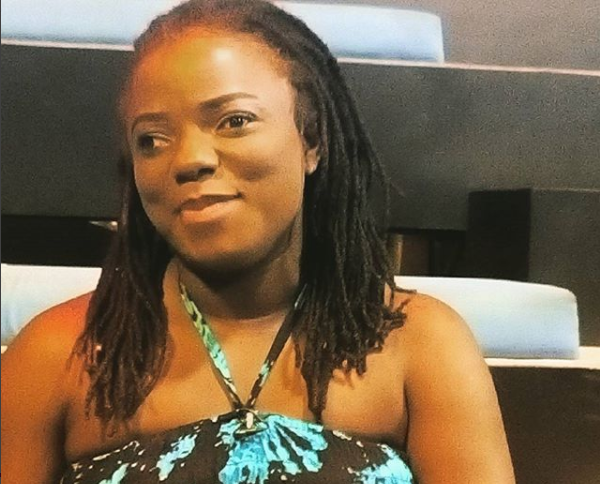 “Divorce from a bad situation is a huge blessing”! – The Gospel According to Daddy Freeze | WATCH

As the world evolves, people are beginning to see things differently and are trying to raise their kids to break the norm. One of such this single mother of two boys, Ayodele Olofintuade who is taking no chance at compromising her belief on how children, especially hers, should be raised.

According to her, raising her sons to be feminists in a society like ours is not an easy one. She took to the Twitter platform to share her journey and all the things she has to go through to raise her sons right and help them achieve their goals in life.

Here’s her emotional story about her sons;

One day I’ll talk about my journey as a single parent trying to raise two feminist sons and how the society is trying to f*ck with their heads.

While in secondary school, my older son decided to drop subjects he really wouldn’t need in the Uni and pick those that can make his grades look really good.

One of the subjects he picked was food and nutrition. The day after he resumed for the class I got a call from his school.

When I got there thinking the boy had done something terrible, I was informed that I needed to see the school counselor. I went to her office only for her to tell me that my son picked food and nutrition.

I waited for the punchline and got none. Does this mean that the boy won’t be able to apply to a uni? No. Is there a law against an art student picking food and nutrition? No. So madam what’s the problem?

I will never forget the dismay on that woman’s face when she informed me that my son is a boy. Really? thanks for that useful information! In the world she’s from boys don’t cook.

Yes he scored an A in the subject because… Why not? Don’t get me started on the number of times I had to go to that school and inform them that they should put my f*cking name on his school fees receipt because I’m the one paying the d*mn school fees.”

Or having to tell them I’m Ms. Olofintuade not Mrs. Whatever their imagination comes up with. The principal told my son that he’s going to be a failure and a dropout because he’s being raised by an unholy single parent.

I enjoyed the shock on his face the day I went to pick Alex‘s original WAEC result so he can submit it to his university.

The Boy was trying to date a girl in his university and she turned him down, why? Because he doesn’t behave like other boys, he’s always asking about feelings instead of just taking what he wants. He’s not ‘rough”enough.

The one that stood out for the eight year old was when he was asked to write an essay on ‘my family’ which included “the roles of a mother and a father’.

The boy cried back from school because the teacher gave him zero. Apparently they’ve taught them what to write already and since that sh*t didn’t apply to my household the teacher couldn’t take it.

So I went to his school to find out why only to get lectured about the roles of a father. I had to report the teacher to the headmaster. It was a repeated nightmare.

The sad thing is that you teach your children one thing and they go back into the society and find out that the opposite holds. The heartbreak and disappointment.

What do you tell an eight year old who wants to find out what he should do when the girls in his class keep hitting him because he told them that hitting people is wrong.

Should he hit them back? Should he just keep taking the beating because teachers think an eight year old should “man up”? Well I told him to fight back, just once. He did and they left him alone afterwards.

But was that the right thing to do?What do you tell your sons about sexual harrassment and r*pe when their friends make fun of them and call them names because they prevented a r*pe from happening in their presence?

That’s why I laugh when people on here complain about how men don’t stop their friends from r*ping or harrassing women.

Masculinity is so fragile in this country that taking action means you get punished with ostracism. The only thing I keep telling them is that there’s nothing wrong with doing things differently, that being different is both a good and a bad thing.

That they can choose to be and that the price they have to make is worth it. But how do you make this clear to a teenager who wants his friends to think he’s cool or an eight year old who’s being taught that mothers Day stay in the kitchen and daddies go out to work?” 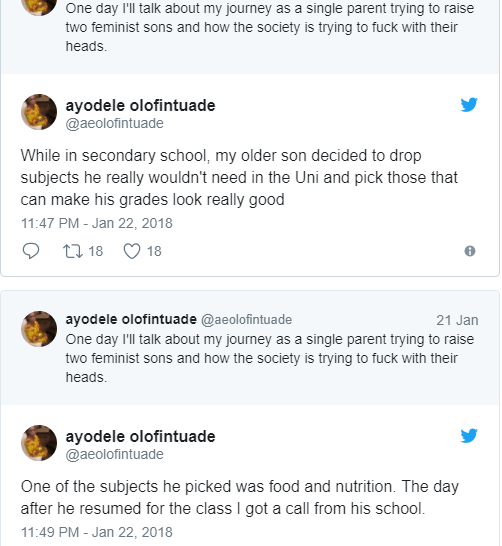 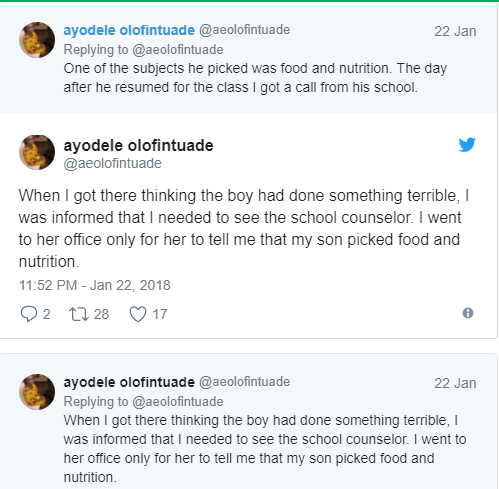 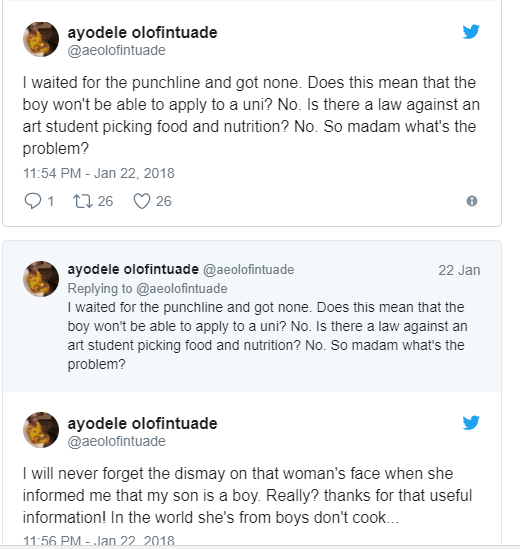 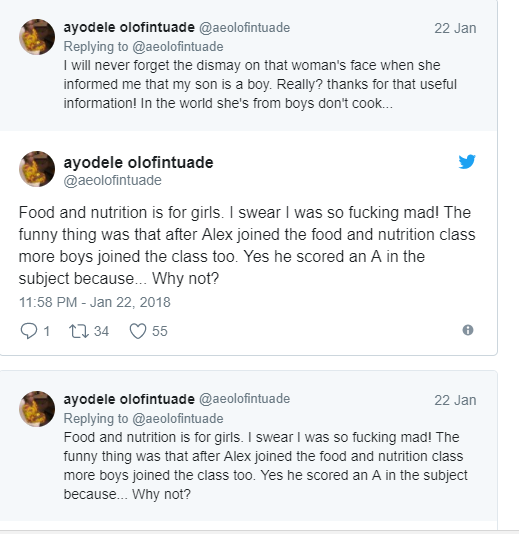 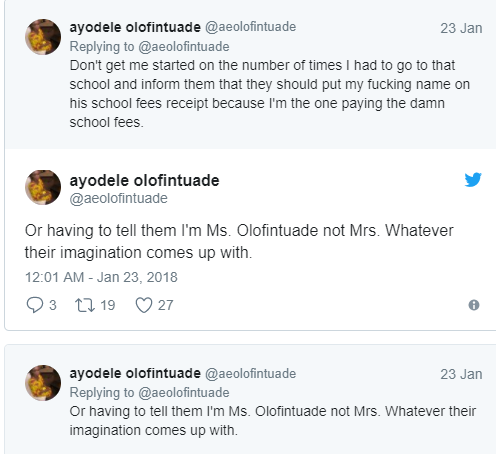 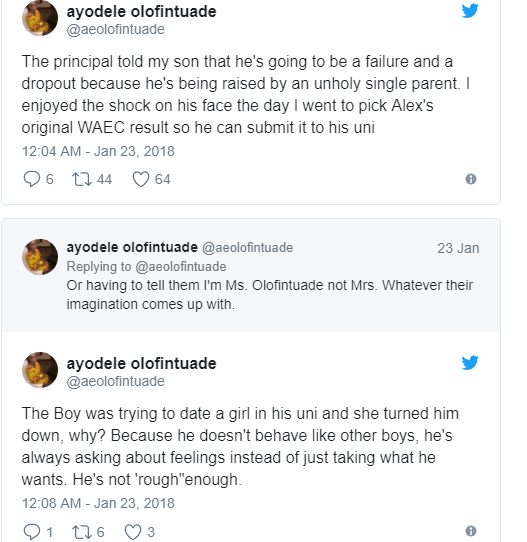 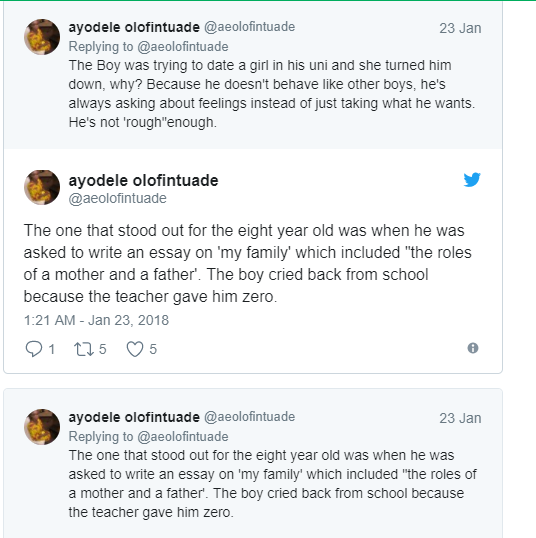 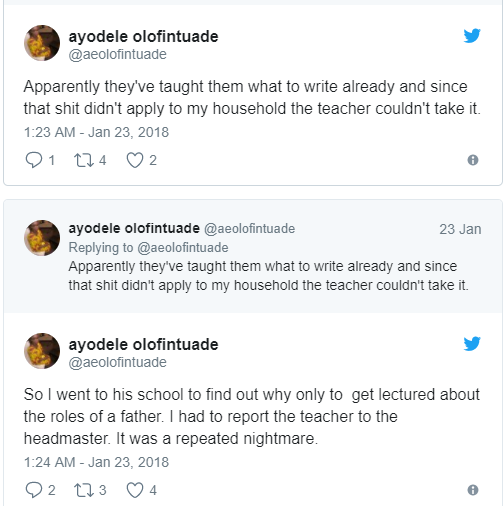 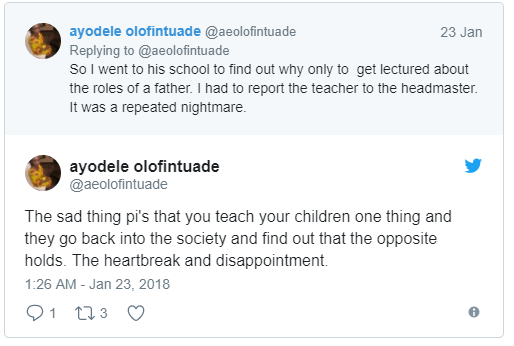