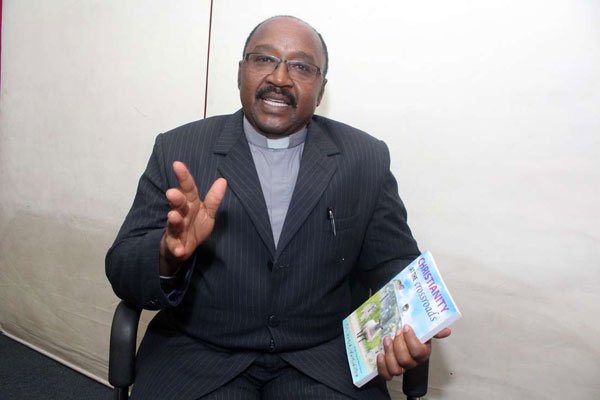 Rev. Vincent Mulwa, a Kenyan pastor at Christ Pilgrim Restoration Centre, has come out to challenge the Christian doctrine that men shouldn’t marry more than one wife.

According to Rev. Mulwa, Africans bought the world views of European missionaries who brought Christianity into Africa and abandoned polygamy, a practice that was rife even among the people who lived during biblical times.

He made this statement in an interview with Kenya’s Daily Nation, where he further revealed that to save a generation of women who are ageing without husbands, men should marry more than one wife.

Rev Mulwa argues that many women are ending up unmarried and others are single and widows after they fail to get husbands.

He says, adding that widows were allowed to become concubines.

Rev Mulwa said he wants Christian leaders to review teachings on monogamous marriages, claiming there is no verse in the Bible supporting it.

READ ALSO: “Polygamy is a Man Made Act to Dominate Women”  – Veteran Singer Felix Liberty Shares his Beliefs about Marriage

”I have been in the ministry for 38 years, preaching the gospel of Jesus Christ but now I have realised that we ministers of the gospel have lost our believers.

I have never seen anywhere in the Bible where prophets and preachers prayed for single ladies to get married.

The Bible people were polygamous and everyone had a husband.”

He says polygamy was commonly practised by many African traditional communities and the Jewish culture was also polygamous, adding that it only began to fade with the introduction of Christianity.

”As far as the Bible is concerned, the number of wives or concubines that one has does not matter and is not a standard of holiness.

I have come out to tell Christians that we must preach the true gospel and allow our men in the church to marry as many wives as they want. Polygamy is not about men needing many wives but it’s about women needing husbands.”

READ ALSO: Shocking! Canada’s Largest Polygamist Says He Does Not Want Polygamy To Be Legalized

According to the controversial cleric, the Bible has only come out strongly to condemn adultery, which is taking another man’s wife.

The reverend further argues that the fact that the missionaries, who mostly came from Rome, began to preach monogamy does not mean that this is what the Bible teaches.

“It is unfortunate for the Church that today, when our dear brothers and sisters attend theological schools, they are fed with so much gentile-tilted theology that upon graduation, they are well equipped to vigorously convince the world to buy into the Roman immigration of Christianity,” he says.

He says Christianity is not an American or European culture. Rather, it is God’s way of reaching and dealing with humankind.

Rev Mulwa, who says he is officially married to one wife, says he was preaching in a church he started 20 years ago but had to leave the church because his wife and members disagreed with his polygamy teaching.

“I told my wife that as much as she doesn’t want to agree with me, I will continue preaching the gospel of polygamy until the whole world hears of it because that is the true gospel,” he says.

When asked if he has secret wives, he responds:

Kaffy Speaks To Women, Mothers On Ways To Guard Against Rising Cases Of Child Molestation In Our Society: ‘I was a victim’

“The number of wives I have is not an issue. If I have one wife or more, I will not be holier than the other. That’s why I am saying Christian men should be allowed to marry many wives.”

His interpretation of the Bible is that it has not condemned polygamy. Rather, it was practised widely by men of God in the Bible.

READ ALSO: Why “men who marry many wives live longer than those with just one” – 91-Year-Old Man Declares

“Polygamy is an acceptable practice. No lady should stay without a husband. Christianity remains the most holy faith, but when preached from the perspective of the European and American gentiles, then it is definitely the filthiest religion on earth.”

He gives the example of some of the men in the Bible like Abraham and David who married more than one wife and had concubines with whom they got children.

“The holiness was in how these men dealt with their many wives and concubines and God had no problem with them,” he says.

He noted that in the Bible, some women seemed to have been in a complex situation such that remarrying was out of thought. They ended up being concubines.

But even for concubines, there was discipline, he says, and a man found with another man’s concubine was to be beaten.

“This was a lesser punishment compared to when you were found with someone’s wife where the sentence was death by stoning,” he adds.