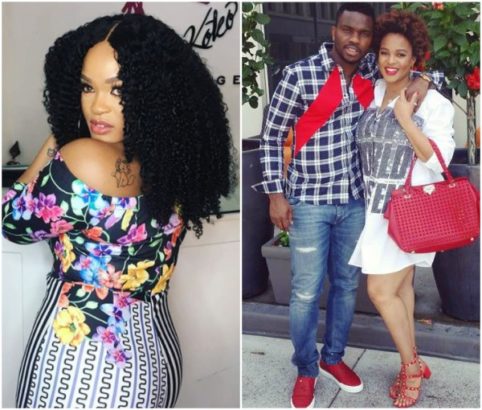 ‘I gave my marriage my best’ -Mimi Orjiekwe on Failed Marriage, Life as a Single Mom and Career

Wife of Nigerian football legend, Joseph Yobo, and former beauty queen has taken to her Instagram page to reveal one silly thing she did in the rave of the moment when she was angry with her husband.

In her post, Adaeze Yobo, yummy mummy of three beautiful children disclosed how she got a meaningless tattoo inked on her after a fight with her husband which lasted for 3 days.

She went further to reveal that she knows her husband hates tattoo, but she did this deliberately to piss him off. According to her, they resolved the fight and when her hubby saw the tattoo, the fight continued.

”So let me tell you my lovers a short story about this tattoo you’re looking at ???? So About 6years ago my hubby and I were having one of those fights (wasn’t serious at all) 2days of not talking to each other, my Brazilian neighbour calls me and said they invited one of the best tattoo artist from Cyprus and some players & WAGs who want to get a tattoo can come over to their home the next day.

READ ALSO: “I cried and worried whether to keep you or not”. Adaeze Yobo Reveal Details About Daughter, Lexine’s Pregnancy

I wasn’t interested but that night of not talking I began to think deep and remembered my hubby hates tattoos and I was like “jackpot” I shall deal with him so the next day came, I dressed up and strolled down to the house.

When it got to my turn the guys assistant asked what I wanted, I said write my son’s name “Joey” immediately, I thought that won’t hurt him as much then I googled Brazilian cartoon characters and I saw this character and I said I want this too and they made that “awww” sound I was like this people don’t get that I don’t want cute so I said make it “wink” ???? and they did.

READ ALSO: Adaeze Yobo Is Obsessed with Her Little Daughter… Do We Blame Her? [PHOTOS]

Funny part is we reconciled like the next day he saw the tattoo and we added 2 more days of fight and finally reconciled he lived with it but I’m stuck with a tattoo that people ask me the meaning or what the hell it is and I don’t even know.

I’m always looking for ways to cover it cos I’m too old to be carrying a meaningless winking cartoon character ???????????? smh! Moral of this story; Anger is not good for you.”

READ ALSO: Adaeze Yobo Claps Back at Fan Who Called Her Lazy & Fat on Instagram