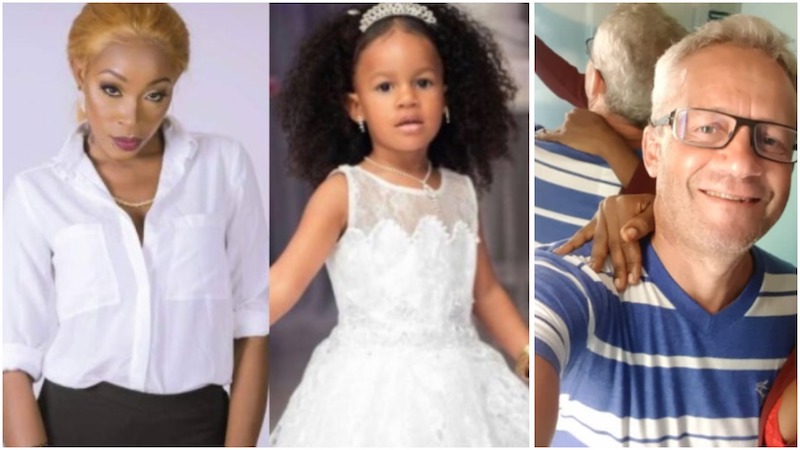 We gathered from new reports that the husband, Peter Schau is in fact, Danish, not Italian as earlier reported.

The fatal assault of the 37-year-old singer and her four-year-old daughter, Petra, took place in the kitchen of their residence in Banana Island, Lagos.

According to Sunday Scoop, Alizee’s father, Ali Madaki, gave some information about the couple. He said, “I have known my late daughter’s husband for over seven years now. At the outset, he was of good character but last year, he started fighting his wife. Last November, a case was reported at the police station when he beat her to a coma. He then wrote an undertaking that he would never batter her again.”

Recalling how he was informed about the ugly incident, Madaki said, “On Thursday morning, he called me; I was in Abuja. Since I missed his calls, I called back and he told me he saw my daughter and granddaughter on the floor in the kitchen. I asked what went wrong; he didn’t say a word and dropped the call. One of my two daughters staying with them called their mother and broke the news. We took the next flight to Lagos and found out she was dead truly. I didn’t even know my grandchild was dead too. I told my daughter to get Petra for me and we should go, then she told me she was dead too. I was shocked. The husband claimed it was gas suffocation that killed them. We know that gas doesn’t kill people that way. In the pictures, you would see bruises all over their bodies. They were strangled to death. I strongly believe he did it because their compound is highly secured. Whenever I visited them, the security operatives had to confirm my visit with them before I would be allowed in.”

Stating that he was unaware whether the Danish man was a drug addict or alcoholic, Alizee’s father said, “I don’t know if he has a history of being an alcoholic or drug addict. She once came back to our house in Abuja after being battered by her husband. She was there for almost a month. The man came and started begging that he was drunk. He said he consumed too much alcohol on the fateful day he beat her. Since they had been together for a while and he had never misbehaved, I accepted his plea and allowed Alizee to return to Lagos.

“My two daughters are in the police station right now to give their statements because they witnessed all that happened. They said he hit her head on the wall. In the morning, he then asked them where his wife was. They pretended they didn’t know what happened. They knew that if they had made any attempts, they could be attacked too. There were five people in the house when the incident occurred – my late daughter, her child, husband and my two daughters – one 12-year-old and the other 10-year-old. I have four girls; Alizee is my first child and her immediate younger sister works in a bank.”

The mourning father stated that he wanted justice to prevail. He added, “He cannot do this in our country and get away with it even though he could get away with it if he had done it in his country. We want our government to pass a strong message to other foreigners with this. If this happens in their country, they would surely execute the Nigerian. Our government must give justice too as they do in other countries.”

Meanwhile, Alizee’s younger sister, Gift Madaki, who allegedly witnessed the incident, stated that when she heard Alizee crying for help, she went out to peep. “I was at home when the incident occurred. When she was crying for help, I went to see what was going on and I saw the husband hitting her head on the wall. I couldn’t come out because I knew he would descend on me too. The man is aggressive,” she said.