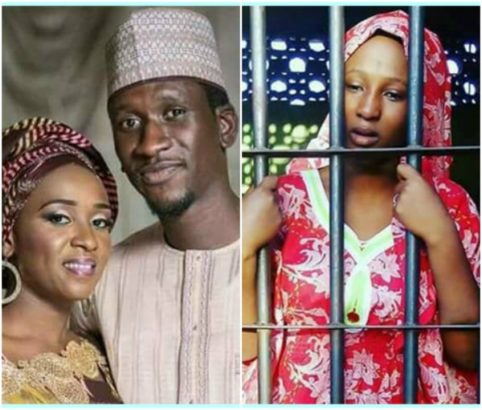 Maryam, who was granted bail based on medical reports indicating she is pregnant, appeared at the High Court in Jabi, yesterday April 19th with one of the prosecuting witnesses telling the court how Maryam stabbed her husband multiple times leading to his death, Daily Post gathers.

Ibrahim Mohammed, a businessman and a friend of the deceased, told the court how the incident occurred on the night of November 18, 2017 while he was paying the couple a visit.

While being led in evidence by the prosecution counsel, James Idachaba, Mohammed said Maryam had on the night of the incident, threatened to cut off the manhood of the deceased unless she was divorced that night.

He said himself and Bilyaminu were smoking ‘Shisha’ and watching TV when Maryam came down to call Bily who answered her call and while they were upstairs, he heard noise from upstairs before Maryam sent Sadiya (the fourth defendant) to call him.

“When I got there, I saw both Maryam and Bilyaminu holding each other’s cloth on the neck. I asked what was happening and pleaded that they stop this.

Maryam told me to tell Bilyaminu to divorce her. I told her they should exercise patience and stop fighting. She said she was not going anywhere until he divorced her.”

Mohammed said Maryam picked a bottle by the side of the door and broke it on the wall.

I closed the door and continued to advise Maryam that they should stop fighting. She said she would not stop until Bilyaminu divorced her that night; that either he divorced her or she would cut his private part.

While pleading with her, Bilyamin entered the bedroom and Maryam followed him, insisting that he should divorce her that night but Bilyamin kept silent.”

Muhammed said Maryam thereafter took one of the containers of scent and broke it on the table and approached Bilyamin to stab him but the deceased held her hand and collected the container and they started hitting each other, before Bilyamin pushed her to the bed and went downstairs but Maryam followed him downstairs.

“She attempted picking the knife for about three or four times,” he added.

Mohammed said he left the couple’s home at about 1am but was later called by Abbah, the brother of the deceased to come to the Hospital.

“Abbah Bello (a brother to the deceased) called me about 1 hour later that I should come to Maitama Hospital because Bilyaminu was dead.

I went there and met Bilyaminu lying on a bed in front of the hospital. There was a hole in his chest near the heart, bite on his stomach. There was a cut on his thigh and there was a sign of stitching on him,” he said.

Mohammed said both families of the couple were at the hospital, adding that they left from there to the police station after the corpse was taken to the mortuary.

He added that while going to the station, Maryam’s mother and brother (Maimuna Aliyu and Aliyu Sanda) with a policeman in their car diverted to the couple’s house.

He added that Usman Aliyu told him that they should follow them to the house to see what was happening there, adding that Maimuna and Aliyu went upstairs, while the policeman was in front of the car.

“Usman Aliyu and I entered the sitting room and observed that everything was normal as we left it. When we looked at where Bilyaminu prayed, there was a pair of slippers and praying mat. On a closer look, we discovered that the window blind had come down.”

Under cross-examination by counsels for the defendants: Joseph Daudu (SAN); Rotimi Ogunesan (SAN); A .T. Kehinde (SAN) and Olusegun Jolaawo, the witness told the court that he left the deceased performing ablution when he was leaving his house that night.

When he was asked if Maryam threatened to kill the deceased all through the fights, Mohammed said she did not state so, adding, however, that, “Maryam said she would cut his private part.”

READ ALSO: Family of Late Bilyaminu Bello Open up About Their Grief: “Maryam is not remorseful”

The trial judge, Justice Yusuf Halilu, adjourned the case to May 15 and 16 for continuation of hearing.