Kate Middleton and husband, Prince William welcomed their third child, weighing in at 8lbs, 7oz, at 11.01am, Monday.

The Royal family are said to be delighted with the news, with the Queen informed of the fifth-in-line to the throne’s arrival earlier today.

In a statement, Kensington Palace said:

“The Queen, The Duke of Edinburgh, The Prince of Wales, The Duchess of Cornwall, Prince Harry and members of both families have been informed and are delighted with the news,” the statement added. 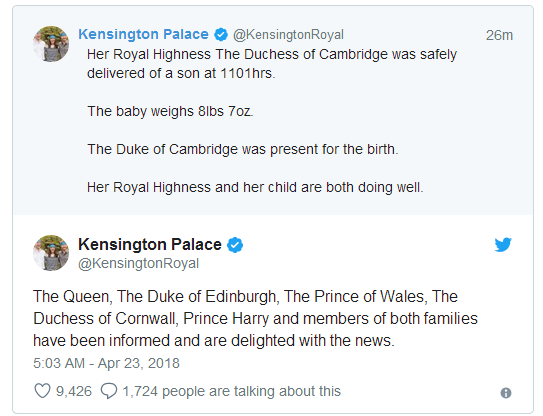 Kensington Palace already sparked a flurry of excitement this morning, confirming that the 36-year-old Duchess of Cambridge had been taken to a private Lindo Wing of St. Mary’s Hospital in central London before 6am after experiencing early signs of labour. The baby will be a sixth great-grandchild for Queen Elizabeth II, who turned 92 on Saturday, and her husband Prince Philip.

The Duchess of Cambridge and her hubby are also parents to Prince George, 4 years old, and Princess Charlotte, two years old. Kate’s two previous births have been fairly quick affairs – Kate had George less than 11 hours after arriving at hospital on July 22, 2013, while Charlotte was born just two hours and 34 minutes after the mum was admitted on May 2, 2015.

Kensington Palace had confirmed that the new royal baby was on the way on September 4, 2017.

William and Kate have chosen not to find out if they are having a boy or girl but given the names they chose for their first two children, it’s no surprise that the the odds are heavily swayed towards very traditional names.

Congratulations to the royal family!