Labour & Birth, News Around the World 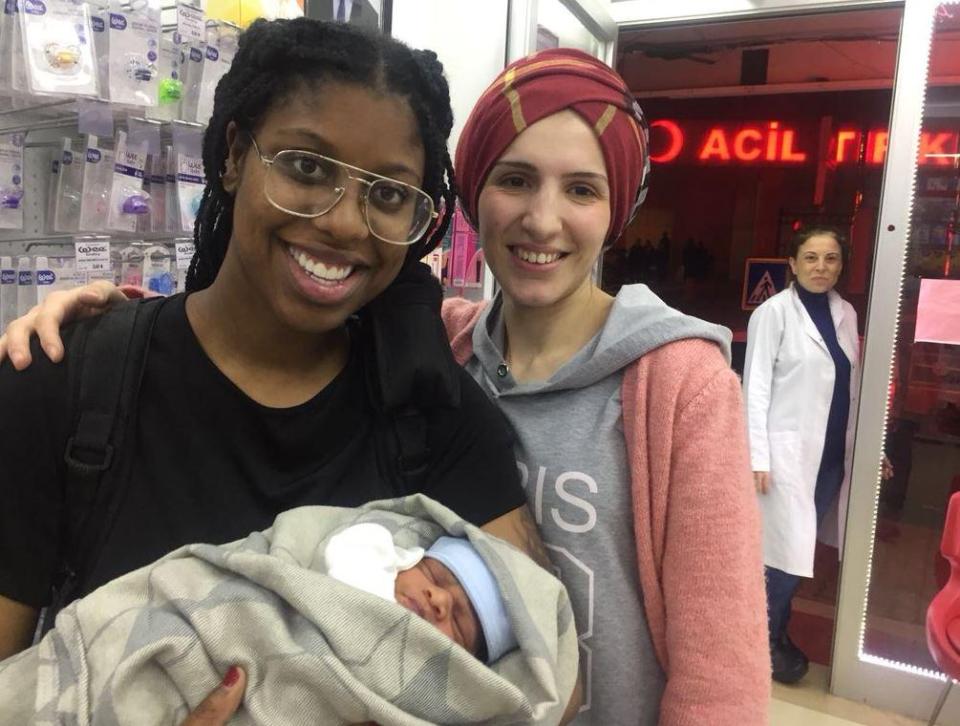 Tia Freeman, who “doubted” that she was pregnant had planned a trip to Germany to see her friend. Unknown to her, she was already in her third trimester. The 22-year-old from Nashville, USA, was travelling from the States to Germany started having contractions when she was transiting in Istanbul, Turkey.

Recounting her amazing story which occured in March on Twitter, the new mom revealed she had been in “denial” – having only been told about her pregnancy at six months. During her trip, she had first assumed her pains were caused by food poisoning from the salmon she’d eaten on the plane. 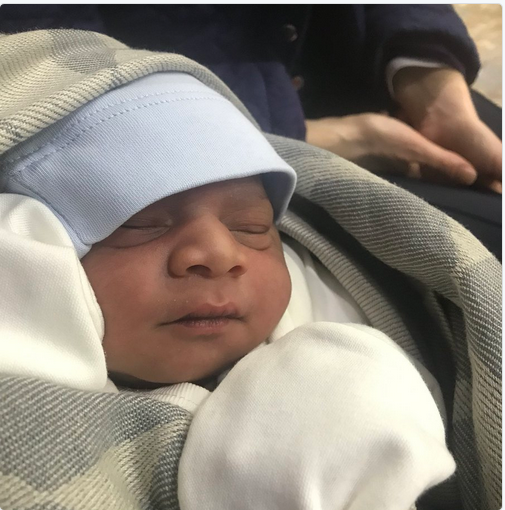 It was only when she was going through customs that she realised what she was experiencing was labour.

”So anyway I make it until we land but when I wake up the cramps have gotten worse and I’m like okay I just want to make it to my hotel. Its my layover and I’m only here (Istanbul, Turkey) for 17hrs. But getting through customs took FOREVVVVVVVERRRRR.

I’m literally gripping the railing trying to make it through the lines. At this point I feel like I’m about to pass out. I’m sweating. I feel like I have to vomit. I’m going through it. Then I’m like wait a minute bitch are you in labor?!!!.” 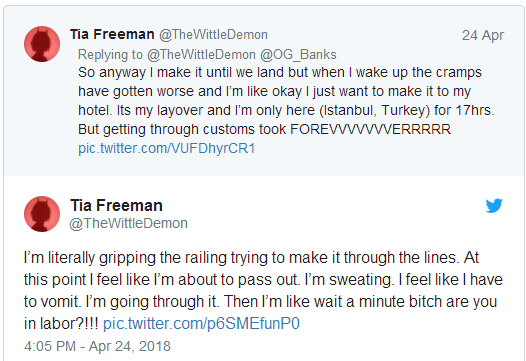 Determined not to give birth at the airport, Tia managed to make it to her hotel room where she then began to search on YouTube for advice on how to deliver her own baby.

Filling a bath with warm water and grabbing two towels (one to bite onto and one to swaddle her new-born in) Tia began pushing once her contractions got to every minute.

After five or six pushes, Tia says that her baby “popped out” and “floated right on up to the top of the water”. Tia then checked the sex of her tot and Googled how to cut an umbilical cord without any tools beyond a knife. 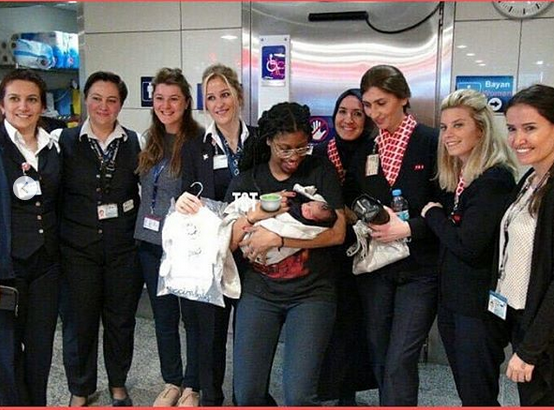 ”I make it to my hotel & now I’m sure I’m in labor. There is no way in the world I’m not in labor because I can barely standup at this point. So I’m in a foreign country, where no one speaks English, I don’t know this country’s emergency number, & I have no clue what to do.

So in true millennial form I decided to @Youtube it. If no one else had my back the internet would! So here my ass is in my hotel room all by my lonesome learning how to deliver my own baby.

So the internet said I shouldn’t start pushing until my contractions where 2mins apart. Bc you don’t want to exhaust yourself too early and then not have any energy when the kids ready to come, you know? And I’m like okay bitch you’ve got a timer on your phone. You can do this!

My contractions were already at a minute a part lol. I was late as hell. I BARELY made it to my room. So I throw the towel in my mouth and start pushing.

And I have NEVVVVEEERRRR felt any pain like this in my life. I felt like I was being split open. WHERE WAS MY EPIDURAL?!

Luckily it happened pretty quickly. I only had to push about 5-6x before a baby popped out. Lol now let me tell you babies are buoyant. That little joker said bloop and floated right on up to the top of the water.

Almost immediately as I sit down it plops out. The hotel had these sanitation baggies in the bathroom so I just picked it up by the cord and dropped it in the bag.

Now it’s still attached to him so now I’ve got to google how to cut an umbilical cord.So I didn’t have any clamps like it suggested but what I did have were shoelaces lol. Hear me out.

In Turkey everyone drinks tea/coffee so every hotel room had an electric kettle. So I just boiled some water to sterilize the laces so that I could use them as clamps.

I didn’t know what I would need to leave the country with a newborn baby and I thought no better place to ask than the airport. When I get there the airport workers are freaking out because you can tell this baby is fresh.

I legit didn’t have any baby clothes & made him something out of my favorite blue oversized button down (RIP). Anyway they thought I was a human trafficker trying to smuggle out a baby.

After everything they say they’re going to take me to the hospital. It’s been almost 24hrs since I’ve given birth. But before I can go my consulate contact comes back & tells me I have to go out the back & get escorted by this special agent because the press were too heavy out front.

To wrap up I go to the hospital get checked out everything is fine. He’s perfectly healthy! Lol the doctors were shocked to hear my story. I made national news & people would stop us to take pictures all the time & a random elderly woman grabbed my boob as I was breastfeeding.

Oh and no one knew I had a baby until days after I gave birth to him (not even my mom) so I sprang this story on everyone.

Here he is Xavier Ata Freeman born March 7, 2018 in Istanbul, Turkey! My little surprise bundle of international joy! (His middle name is Turkish).” 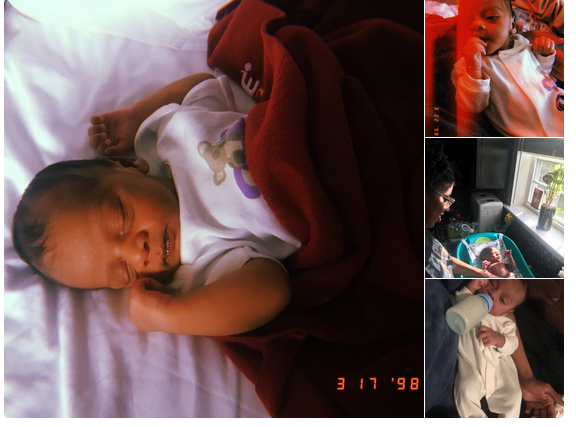 Using sterilised shoelaces as clamps, Tia then cut the cord and cleaned up the bathroom, “which looked like the set of a horror movie”, before breastfeeding her little boy  and going to sleep.

The next day, Tia made her way back to the airport to find out how she would leave Turkey with a new-born in tow.

After convincing local police and Turkish Airlines of her story, she became headline news.

Eventually, Tia was taken to the US Consulate in Istanbul, where she applied for a birth certificate and passport for her son – who she named Xavier Ata Freeman.

After going to hospital, she was given the all clear and spent another two weeks in Turkey, fully paid for by Turkish Airlines. 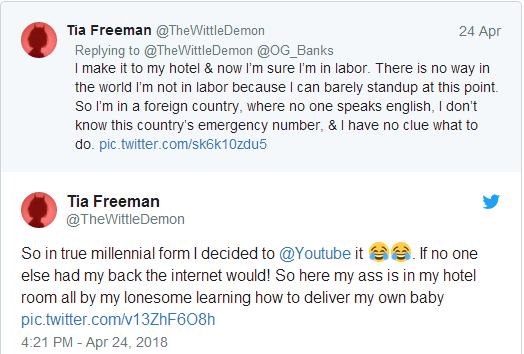 My contractions were already at a minute a part lol I was late as hell. I BARELY made it to my room. 😂😂😂 so I throw the towel in my mouth and start pushing. And I have NEVVVVEEERRRR felt any pain like this in my life. I felt like I was being split open. WHERE WAS MY EPIDURAL?! pic.twitter.com/HGlootcNHu