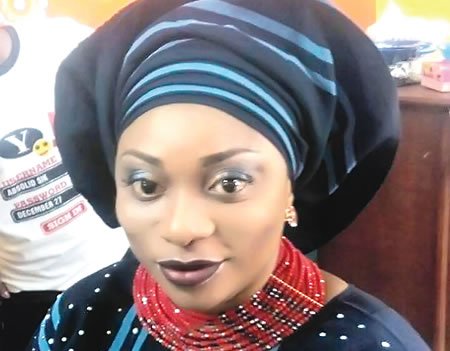 A Nigerian television presenter, Hilda Ehidiamen Esangedo Zeb Ejiro, has narrated her domestic violence story. In a chat with RITA OKONOBOH of Tribune, Hilda of Touch Not Foundation, told why she remained in her abusive marriage for 12 years.

The divorced single mum of two lovely kids, who is also a writer, motivational speaker, MC and actress, shares what brought about her interest on issues of domestic violence and her recommendations for addressing it in marriages.

I was born as the second child in a family of five to Chief and Mrs Ehidiamen Esangedo. I was born in Lagos, but I grew up in Calabar. My father died when he was 39 years old that was in 1984, so I was brought up by my mum. I am an English graduate of the Ambrose Ali University, Ekpoma, Edo State.

I anchor Fashion with Hilda, a programme on Galaxy Television. I am also an advocate against domestic violence and rape and I am an ambassador for abused women and children.

I am a divorced single mum of two lovely kids. I run an online programme called Hilda’s Frank Talk on Domestic Violence and Rape. I am a motivational speaker and author, and run a modelling and ushering agency, Hilda’s Angels International Agency.

You are a popular face in the movie industry. How did you find yourself there?

I started acting when I was three years old – that was on stage. I joined Zeb Ejiro (on his invitation) on the set of Ripples, when he met me on the set of Third Eye alongside Olu Jacobs and Sola Soludo.

I produced and acted in a lot of Nollywood movies alongside Alex Usifo, Jim Iyke, Sam Loco Efe, Bukky Ajayi, Pete Edochie, Rukky Sanda, among others. I’ve been away for a while but I’m working on a come-back.

How did Touch Not Foundation come into existence?

I was involved in domestic violence and rape for twelve years and vowed to do all I can to help women not to become victims. I also want to help those who have become victims realise the consequences and to encourage them on what to do to ensure that they live the normal life that God designed for them.

Why did you stay in an abusive marriage for 12 years?

Fear. Fear of the unknown. I was financially dependent on him. I questioned myself over and over: ‘Where would I go to? Who will I start with after 2 kids?’ I lost my self worth, based on the verbal and emotional abuse. Fear kept me for 12yrs.

You must have come across many stories. What has been the most touching story so far?

All cases are touching to me. Whether it is from a woman that has been battered, or a girl child that was raped, I treat all cases very seriously because with domestic violence, no case is unimportant. A so-called ‘small case’ can evolve into a life-threatening situation.

Sometimes, I receive late night calls from victims who were sent away from their homes. I have chatted with men that were at a loss on what to do. I have met with victims who just needed someone to listen to them.

I once travelled to meet with an elderly man who was being abused by his wife. Each situation comes with its own challenges, and by the grace of God, majority of the issues were resolved.

Overtime, there have been concerns that religious organisations are complicit in encouraging domestic violence, although not deliberately. Have you had cases like this?

Religious bodies are part of the problem. Sometimes, heads of churches and their wives, for instance, send victims back to their abusers with the claim that God hates divorce. Even the Bible encourages separation from violent partners.
God hates divorce, but the question here is ‘Does He approve of domestic violence?’ That quote ‘God hates divorce’ has sent a lot of victims to their graves and it will still send more to their graves if something is not done and fast too.
Our spiritual fathers and mothers should be concerned about the safety of the victims than saving the marriage. The person can remain married only when alive. They should stop making victims feel guilty when they seek safety or try to find lasting solutions to their situations.

How far would you say is too far when it comes to domestic violence?

Personally, I don’t encourage anybody to stay back after the first attempt. An abusive person doesn’t stop. He/she graduates. They don’t change. What changes is the pattern. Once beaten, always beaten.

Can a marriage still work after domestic violence?

Yes, it can. Only if he/she has accepted that he/she has a problem and goes for treatment.

Why do you think women find it harder to move on after divorce, compared to men?

It is so because one of the traits of abused men is that they strip their women of financial freedom. This affects the women greatly, especially when they leave with their kids, which is always the case. Then the society too is not kind to divorced women and single mothers.
Sometimes, landlords/landladies find it hard to allow divorced women and single mothers, even mature single ladies, in their homes as tenants. In the church and work place too, sometimes, key positions are not given to such women.
Emotionally too, women are more susceptible, such that even if the marriage ended badly for them, and they may find it harder to want to shift from their ‘comfort zone,’ to which they had adapted to.

READ ALSO: Burial Photos of Mother-of-5 Allegedly Beaten to Death By Her Abusive Husband Highlights the Dangers of Domestic Violence
Cases of divorce are on the increase. What do you think is responsible for this?

People do not really know why they are even in a relationship, and they move on to marriage because that’s the next natural thing to do. There is more to marriage than love, romance or sex.
The realities of life like finances, extended families, religious beliefs, characteristics of partners, children, health, sexual compatibilities, among others, comes to play in marriage. That’s why you find out that a relationship of 10 years might not be able to stand six months of marriage.
Also, unlike in the past, where women accepted anything in the name of marriage, women are now more aware of their self worth and also aware that though marriage is necessary, it is not compulsory.