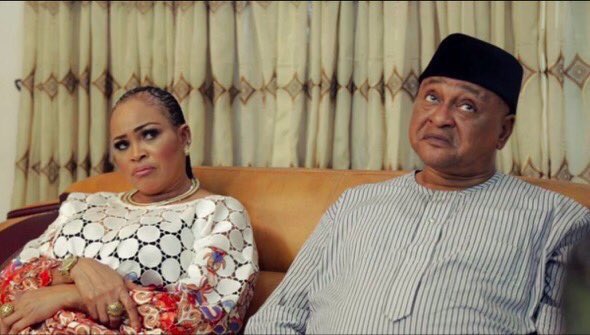 A Nigerian man with Twitter handle JUDE ONYEKWERE SKONES™@perfectskones has taken to twitter to pen down a most controversial topic.

He wrote about how some Nigerian families have destroyed the marriages of their loved ones.

He mentioned amongst other factors: religion, tribe, and jealousy. He said these factors are the instruments some parents use in destroying their children’s relationships and marriages.

”Nigerian families destroyed most marriages Shar. From tribe, to jealousy, to insecurity, it’s terrible. A sister feels her brother is being jazzed by his wife because he bought her a car.. But she’s keeping malice with her own husband because he hasn’t done same for her.

Most mothers want to overwork your wife- to-be to see if she’s the one for you.. but be quick to advice her own daughter not to let her in-laws use her as a servant.. why ?

A father believes his son should be constantly sending him money not considering the fact that he has his own family to cater for and eventually when he doesn’t have to give, they go with the narrative that he’s spending on the in-laws more.. then the bad blood starts rolling.

Families will tell their male kids not to marry a poor girl that doesn’t have anything she’s doing. Same families will caution their jobless daughter to only marry a rich man that can take care of her very well.. why’s that ?

A Yoruba girl would rather settle for a TUNDE with four to five girlfriends than an EBUKA who is a proper loyal gentleman, because she’s has the orientation that nothing good will come out from dating the latter… it’s more like a song for them when they were younger. Tribe!!!

Every other family is not clean… you’ll take their names to several pastors for prayer before you decide if they can marry your child.. but did you equally take names of your own family members ?

In my town, we were made to believe that all ESAN people are witches and troublesome, that we can’t marry them… hardly will you see a Delta man who’s married to an ESAN woman. Hardly, my same people dislike Igbos because they believe they’re ritualist, but what are we?

READ ALSO: A Nigerian Tweets His Grievances About African Parents

Some families even see churches as an obstacle. They’re redeemed we’re Catholic… we can’t marry them… I mean… isn’t it the same God? Someone said to his son, even if it’s an imbecile I don’t mind as long as she’s from our town… LoL. Really ?

Me, for one never really cared about anyone I settled with.. as long as she brings me peace and makes me happy.. be her Yoruba, Igbo, Efik, Tiv or Idoma.. even Igala and Ebira.. but the family factor always plays in my head.. it’s terrible. ????

One of my best relationship was from a Kaduna girl.. about 4years older than me… Her name was Arashiiaa.. She was near perfect, matured and peaceful. The day I told my uncles about her was the day they talked me out of the relationship.

We no go fit go that side, they said them too dey spoil… she old pass you sef. Abeg go fine better girl… everyone had flaws but us… now If you decide to say fuck all and go against them… the world will turn on you when life goes south on issues which aren’t even relating… smh.” 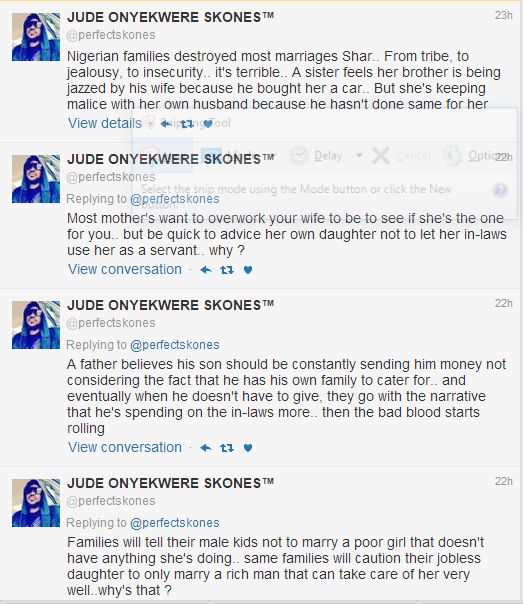 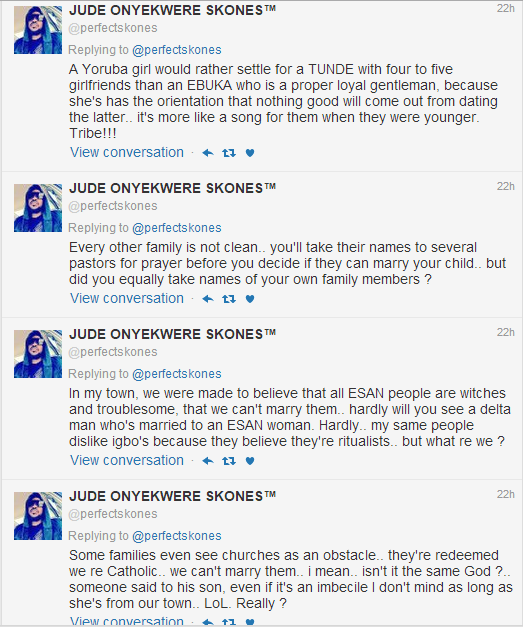