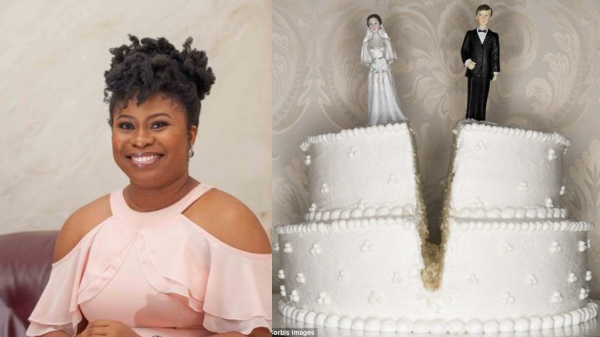 These Beautiful Words Of Chelsea Striker, Alvaro Morata To His Wife As They Welcome Twins Is Everything

In a society where men are made for rules and not rules for men like we have found ourselves, where (wo)men are shamed for choosing personal happiness over societal acceptance, where many have been programmed to suffer and die in silence; it’s liberating to find someone speak up.

In a Twitter thread on marital pressure and life choices, a Twitter user @eketiette recounted seeing a bride stop cold on the steps of a church and say, “This is more than cold feet. I can’t marry him.”

According to the Nigerian lawyer turned writer, she understood the lady’s decision and admires her bravery. She further added that our culture of marital pressure, and shaming people into remaining in an unhealthy relationship isn’t a good one.

”I once watched a bride stop cold on the steps of a church & say, “This is more than cold feet. I can’t marry him.” At the time, I only saw her fear. Today, at last, I understand. I’m amazed by her bravery. *sigh* Doing the right thing. It’s hard, it hurts, but it must be done.

Now I have to make a thread because of the replies from some men. I wasn’t expecting the anger and condemnation. It’s easy to hold your phone and type hard words. Until you find yourself in the situation. Be honest. We don’t always do the right thing at the right time.

READ ALSO: This Nigerian Man Touches On A Delicate Issue As Regards Relationships And Marriages. Do You Think His Opinion Is True?

Or do what we really need to do. Many of us studied or are still studying courses our parents picked out. Or working jobs we hated to please family/society. Because we couldn’t stand the heat that came with making the hard decisions.

In doing these, we lose time, money, opportunities, etc. We even hurt people. It is the way of life. Now, I don’t know about you guys, but I’ve been in situations where everything looked perfect but my guts told me otherwise.

People urged me on because the person/business/situation looked perfect. Like this case. He was a good man. But he wasn’t the one for her. People told her he was; he too. Could she have quit earlier? For sure. Would it have been easier? No.

Because we live in a society where calling off a wedding ceremony is almost a taboo. And no matter how hard we try, we constantly battle with the ‘what will people say’ syndrome. So, until you’ve stared parents/society in the face and followed your heart/guts, don’t say this isn’t bravery.

Until you’ve never lost anything because you always got it right, don’t knock this too hard. A little understanding, that’s all I ask. Oh, I also feel the irrepressible urge to add that when the dust settled, he was grateful she didn’t go through with it. He married someone else ten months later. She married someone else two years later.

READ ALSO: “How counselling destroyed my marriage rather than save it” Divorced Mom-of-2 Painfully Recounts

Judging by some replies, my parents should call me, “selfish, barbaric, callous, insensitive…” I mean, they spent millions to ensure I became a barrister yet I refused to practice the law because writing makes me happy.

Imagine their horror when I quit my job at the Supreme Court. Why didn’t I quit while filling my JAMB form? Selfish me. Our culture of marital pressure and shaming people into remaining in such situations isn’t a good one. Just so you know. Now, I rest my case.”

READ ALSO: Nigerian Writer Eniola Adeniji Shares Her Painful Marital Experience: ‘NEVER be in a hurry to walk down the isle’ 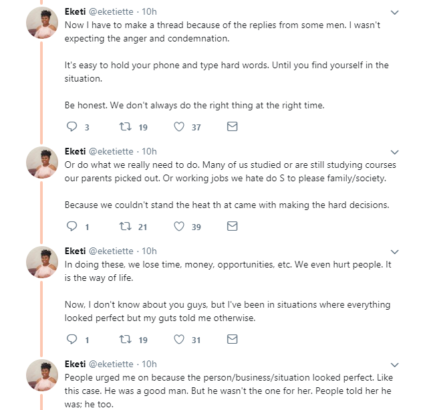