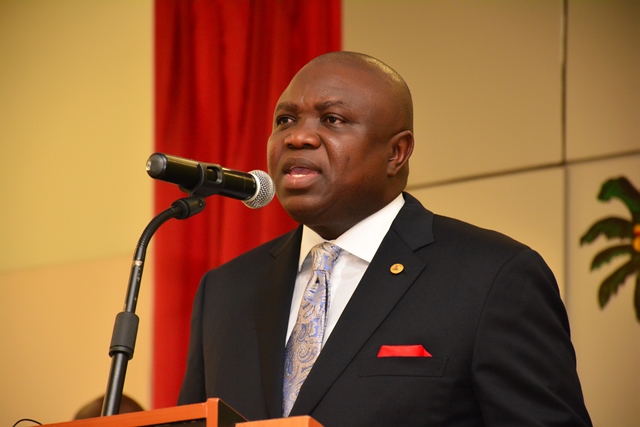 The government of Lagos State seem to be running an all-inclusive administration; one devoid of gender bias et al.

The Lagos State Governor, His Excellency, Mr Akinwunmi Ambode, on Thursday urged Nigerians to take a common stand against sexual and gender-based violence, by advocating for the review of our laws; in order to provide stiffer punishments for offenders citing the serious threat the evil act poses to safety and security of women and the girl-child, Lagosstate.gov.ng reports.

Governor Ambode, who was ably represented by the Secretary to the State Government, Tunji Bello at the 18th Regular National Council Meeting on Women Affairs and Social Development held at the Academy Inn, Agidingbi, Ikeja, added that sexual and gender-based violence constitutes a social menace that must be kicked out of the nation’s social system in order to protect and preserve the dignity of womanhood.

The vibrant governor posited that to achieve social inclusion and integration for socio-economic development, we, all must identify and address decisively issues of gender inequality, girl-child education, domestic violence and sexual abuse that have limited the capacity of women from achieving their full potentials, and contributing their quota to the development of the economy.

“In Lagos State, the issue of sexual abuse and gender-based violence is being addressed continuously through the Domestic and Sexual Violence Response Team (DSVRT)”, he explained.

He disclosed that the State Government is committed to ensuring the growth of every facet of the economy, and will continue to invest significantly on safety and security; as no economy can thrive in an atmosphere of fear, chaos and general insecurity.

He said the theme for the 18th Regular National Council Meeting: “Peace, Security and Social Inclusion: Key Building Blocks for Achieving Economic Growth and Sustainable Development” touches directly on the critical issues that determine the level of prosperity that can be attained by any society.

While stressing that the choice of the theme is instructive and reveals the untold hardship usually suffered by women and children in a state of insecurity, the Governor expressed the need to increase the involvement of women in the social, political and economic activities of the society.

He reaffirmed the State’s commitment to a system of governance which does not discriminate on the basis of gender, ethnicity and/or physical disability, asserting that all citizens without bias to gender have the opportunity to express their opinions on issues, especially those that directly affect them.

The Governor explained that his administration believes in empowering the informal sector which is majorly constituted by women, so as to facilitate the process of socio-economic inclusion.

He said the mandate of Lagos State Employment Trust Fund (LSETF) is to identify genuine and credible entrepreneurs, and to financially empower them so as to grow their businesses and establish new ones.

Earlier in her remarks, the Minister of Women Affairs and Social Development, Senator Aisha Jumai Alhassan had commended the Lagos State Government for playing the lead role in domesticating and implementing the Children Rights Act.

She added that the efforts made by the Lagos State Government in eradicating gender-based violence and continuous empowerment initiatives for women, are truly appreciated.