It is indeed a September to remember for Oluwayemisi Cole, the ex-wife of Nigerian professional footballer, Nurudeen Adegbola Orelesi . The perturbed woman took to Facebook to share her sad marital ordeal with the footballer, in a manner that has left many stunned.

Orelesi plays as a defensive midfielder for Albanian club, Kamza and has spent most of his career in Albania.

Oluwayemisi, in a detailed post on Facebook ,opened up on the role she played to help Orelesi’s budding career and how she was abandoned after the footballer got his 1st contract.

According to the University of Ibadan Philosophy graduate, she had gotten married to Orelesi whom she called a grown up baby, in September, 2015. 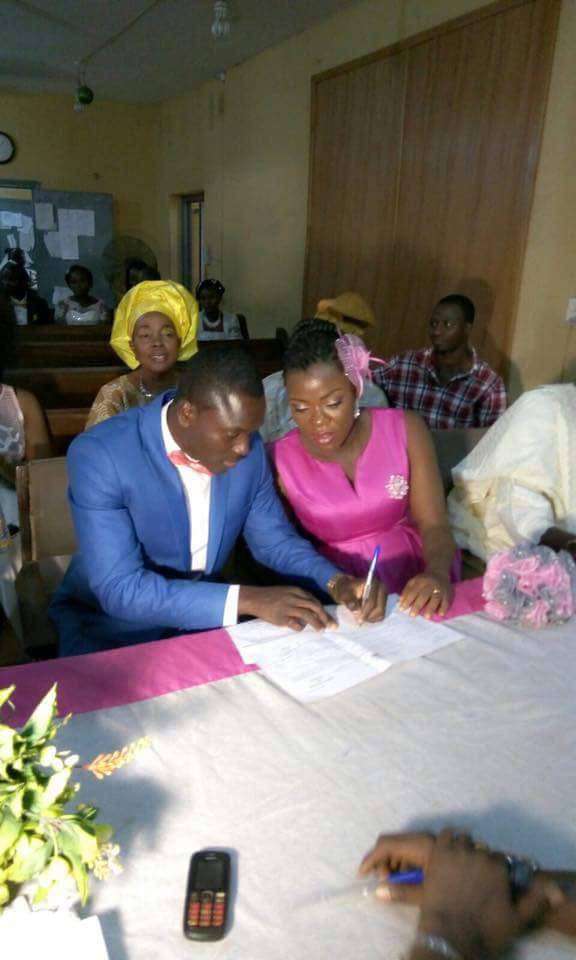 But before then, they had been dating as far back as 9 years. At that time, Orelesi was preparing in full gear for the world cup and his girlfriend was helping him out. Based on her words, she was there for him all along even at the expense of her own mother who was sick at the time, and who later died on Wednesday, September 9, 2009.

According to Oluwayemisi, everything changed after Orelesi represented Nigeria at the 2009 FIFA U-20 World Cup in Egypt, adding that upon marrying the footballer who currently plays for FC Kamza, his mom- who had always seemed to love her, reportedly turned her back against her and became a thorn in her flesh.

ALSO READ: What This Grandmother Did To Teach Her Daughter In-Law A Lesson Will Make Your Jaw Drop

Oluwayemisi further revealed how she moved out of the footballer’s house because of the troubles she was having with his mom which eventually led to their divorce.

The aftermath of the conflict also led to the footballer going through external sources to check up on their son, Iyanu.

While recounting her ordeal, Oluwayemisi admitted the issue she had with her ex-husband and his mom pushed her close to suicide:

”September to Remember. On this date 3yrs ago I got married to a grown up baby. This same month 9yrs ago my late mum was hospitalized and I was busy running around for that grown up baby boyfriend of mine who was at the national U-20 camp so as for him make the final list to play at the World Cup

On the 23rd of that same month 9yrs ago was my mum’s burial and also the grown up baby’s 1st World Cup match against Venezuela and I left the party with some of my boys to go watch him play and went back to the party afterwards.

READ ALSO: How Karma Caught Up With Mother-in-law Who Maltreated Her Son’s Wife

Hmmm I remember how the grown up baby’s mum was always worshiping, praying, and thanking me for all I was doing for her son and would even bring bunch of fruits for me and my mum hmmm.

Immediately after everything, as in, after the World Cup that her son got a professional contract and started playing in Europe hmmm she started treating me like a stranger and I was asking myself if she wasn’t the same woman always thanking and praying for me for standing by her son hmmm and all of a sudden started treating me like a stranger hmmm.

I started seeing her true colors when her son became bread winner. I saw hell and even have to leave the house for her and started squatting around with my less than a year old baby just so I can have peace.

‘How Did Something I Wanted So Much Become The Most Painful Experience Of My Life’ -New Mum, Mo’cheddah Details Her Pregnancy Ordeal

After some months, her son sent me money to rent an apartment which I did and when her son got back he came to the rented apartment where I was staying with my son not knowing that would be my greatest crime ever oh boi na then the proper wahala come start oh.

Fast forward to when her son finally dumped me and my son this year, May hmm he was is Nigeria from May ending till middle of August when someone told me that he had traveled back hmmm and the next thing is that he is always calling people around me to ask how Iyanu is doing and I started wondering what happened to my phones or what really came over the mummy’s boy.

If you no marry me again mean say make you no fit ring my phones directly to check up on your son?
Ki Olorun ma jeki a shi ese gbe laaro Ojo wa o

????
Whatever happens in life, life must continue

NB: please whenever you notice your supposed to be mother in law is against him marrying you please

????‍♀️cause no matter how you try to make it work Mhen kolewerk because na mama get him pikin and last last na the mama own the pikin go do.”