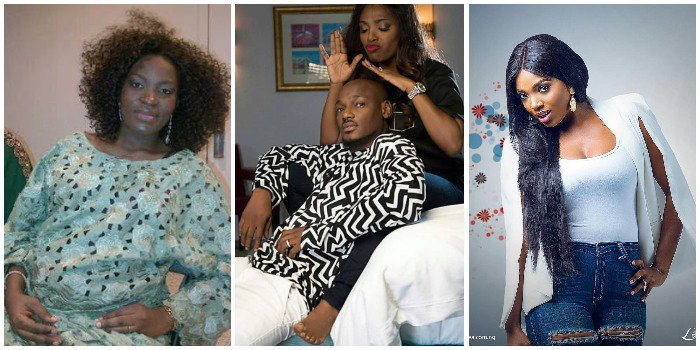 Mum of 2, Paula Rumm Reveals How She Won Her Battle With Depression Without Medications

2Face Idibia cried tears of joy at an event on Sunday when his wife, Annie Macaulay-Idibia and his baby mama, Pero Adeniyi made peace after many years of animosity.

2Face dated Annie Macauley-Idibia, Pero Adeniyi, and Sunmbo Ajaba-Adeoye and had kids with all three women about the same period but the award-winning dad-of-7 eventually settled for Annie amongst the 3 women.

Annie and Sunmbo enjoy cordial relationship and their kids do, too; but it hasn’t been the case with Pero.

The good news here is that Pero and Annie finally buried the hatchet- they put their differences aside, and hugged each other at an event at Crescendo Lounge, Ikeja; on Sunday. Both women hugged as 2Fface’s “One Love” song played in the background.

The gesture moved 2Face who broke down in uncontrollable tears while he joined the women in a group hug.

Pero could be seen mouthing ‘Stop!’ to 2Face as he cried.

Watch the beautiful video as shared be @callme.uchay below.

@callmw.uchay: “It was highly emotional yesterday at @welove_crescendolounge , the legend of our time brings peace to the Middle East ..???? The rift between @perosaiyemi_ , @annieidibia1 and @official2baba . came 2 an end ????????????????#spreadlove#letloveleads#allweneedisonelove@lindaikejiblog@instablog9ja@tundeednut@club_rumors@rumorssignature”