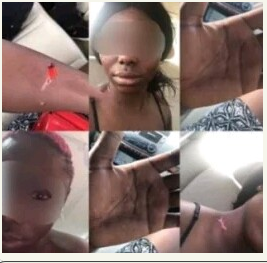 Dear MIMsters: Everything In My Marriage Is Going From Bad to Worse

Nigerian woman, Oghene Karo, who recently, was a victim of rape has taken to social media to narrate her ordeal.

According to the young woman, she was battered by the rapist identified as Wale who lives somewhere in Oluyole, Ibadan, Oyo State.

Oghene Karo narrated how she had stepped out to the mall to see a movie, because she was bored. While there, she met Wale, who was very lively and friendly.

In the course of their conversation, Wale admitted to liking her and wanting them to chill together. And after promising that he wasn’t after sex, Karo decided to follow him home.

However, upon getting to his house, he started making advances which she rebuffed. She said it got to a point that she had to shout at him, only for him to respond to her with a slap.

Karo revealed that Wale claimed he had spent money on her and she wanted to scam him, adding that if she had been doing it to other guys, it wouldn’t work with him.

She eventually escaped but not without bruises after a long struggle which made her think reporting to the police was the ideal thing for her to do.

She however got the shock of her life when the police released Wale after asking his to pay her N20,000 to treat her bruises.

Oghene Karo stated that she regrets reporting the incidence to the police.

Sadly, this is coming after it was reported that the incidence of rape has taken a serious dimension in Ibadan, Oyo State; with over 20 new cases reported monthly. A survey by NAN correspondent in Ibadan showed that the menace was fast assuming a dangerous dimension, with reported abuse of minors.