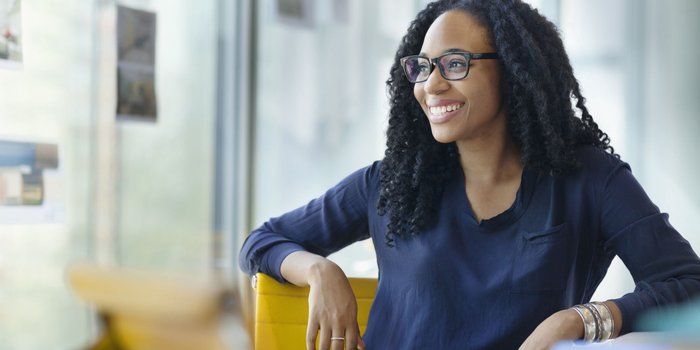 David’s parents started with prayers then his mom sang a common Yoruba prayer song to me. The literal translation of the song says, “There is only one ‘But’ in my life. I do not want it anymore, the God who erased the ‘But’ in Jabez’ life, erase the ‘But’ in my life, too.”

David’s dad took over from his wife: “Grace, we liked you even before we met you. We liked you the moment David told us about you and when we eventually met you, we could see that David was not too accurate in describing you to us. Not only are you more beautiful than he described to us, you are everything and more than we have always prayed for in a daughter-in-law.”

I smiled impatiently and said, “Thank you, sir.”

READ ALSO: Dear MIMsters: Caught In a Love Triangle And I Don&#8217;t Know Which Way To Turn

Then he continued. “My wife and I have five children- 3 girls and 2 boys. David is number 4 amongst our children and he is the only one left in the country with us which would explain why you have never met the rest of our children. Also, apart from David, the others are all married. David was almost married 3 years ago…”

I raised my head when I heard that. To think David never told me that?!

He continued, “Like I said, David was almost married 3 years ago until someone told his fiancée’s family about the only ‘but’ in my family and the girl called off the wedding a week to the ceremony. It took David a whole year to recover. After he did, he got involved with another girl and out of the sincerity of his heart; he shared his past with her. I am sorry to say that that was the last he heard of the girl so forgive him if he couldn’t bring himself up to telling you about his past. It was out of fear of losing you.”

His mom got up and pulled me into a hug. A tear escaped from my eye and she wiped it with her wrapper.

I told them it was okay and that I wanted to know the ‘But’ they had been talking about.

David’s dad continued, “I am in my early 70s and my wife will be 70 in a few months’ time but we do not have any grandchild yet. All our daughters and the only daughter-in-law we have for now are all waiting on God for the fruit of the womb. We know that there is nothing God cannot do so we have not stopped praying for His mercies. Medically, they have all being certified ok but only God knows why this ‘But’ exists in my family.”

When he was done, the three of us kept quiet. I did not even know what to say. First, I would have wanted David to have told me all of these by himself but he was too timid to do so. I love this family, I love David, I have spoken to all his siblings over the phone and they all sounded nice but can I cope with barrenness?

I thanked them for telling me and I asked them to give me time to think about what they had just told me. We got up, packed our things and returned home.

READ ALSO: Dear MIMsters: Why I Have Been Venting My Frustrations On My Husband

I stayed away from David for about 2 weeks after his parents told me about their family challenge. I needed to seek God’s face and discuss with my parents.

My parents asked that I severe the relationship immediately.

I took my time to pray and I went to seek counsel with my pastor’s wife. She prayed with me and asked that I let God lead me.

That night, I had a dream. I saw myself and David in a very spacious house and the whole sitting room area was littered with children’s toys.

When I woke from my sleep, I knew God was talking to me so I prayed for understanding then I went back to see my pastor’s wife. When I told her about my dream, she encouraged me to go and speak with David so I went.

I called him and we met at a fast food joint. I asked him why he let his parents do what he should have done by himself and he apologized. I told him I would marry him and that I believed God that his family’s history will turn around for good.

When I got back home, I told my parents my decision but they kicked against it. I told them I wasn’t going to back down. God so good, my brothers all supported me and so, my parents eventually had to give in.

6 months later, David and I got married.

My sisters and brothers, a month after, I conceived and we were all happy but the devil reared its ugly head. I had a miscarriage after 2 months. The whole family was devastated!

Lest I forgot, when I decided to go ahead with David, my pastor’s wife and I started to fast and pray every weekend asking God for mercy. On one of those weekends, I had a very scary but definitive dream.

In that dream, I saw a big bag with many children in it. A scary looking woman sat across the bag with a big cane. As I made to go near the bag, she charged at me and I ran away. As I was about to run out of the door, my pastor’s wife appeared and holding my hand, we were able to subdue the woman and we released all the children from the bag.

READ ALSO: Dear MIMsters: Everything In My Marriage Is Going From Bad to Worse

So when I miscarried, I knew it was the devil trying to confuse me but I held on to God. David joined my pastor’s wife and me in our fasting programme. After some weeks, his parents joined us, too.

All we kept asking for was for God’s mercy.

After 5 years… Now, I would not be able to tell you about the times someone amongst us would become discouraged but my pastor’s wife never gave up. She was so certain God would answer us.

On our 7th wedding anniversary, just as I saw in my first dream, our sitting room was littered with toys because our set of twins arrived 6 month before the day.

Now, it’s been 14 years with David, and it gets better by the day. My parents-in-law are in their 80s and all their children are parents already.

My parents-in law celebrates me unendingly. My husband’s siblings and their spouses moved closer to God as a result of my faith in Him.

I am a fulfilled woman because I put my trust in God, and I found a great support in my pastor’s wife.

Are you about to make a major decision concerning your life? Then let God take the lead.

Thank you for reading my story. I hope you were able to learn one or two things from it? God bless you all.