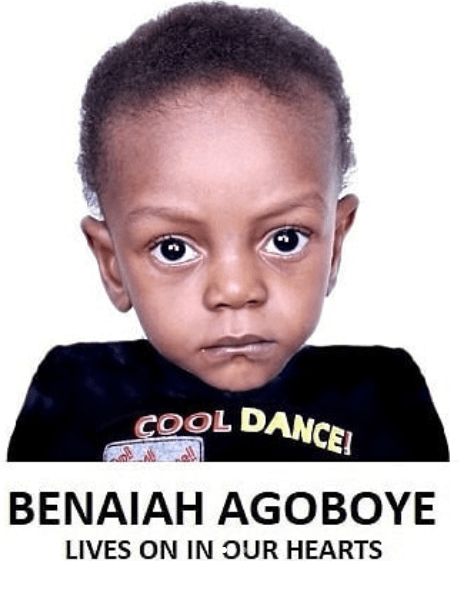 News broke on Friday of the death of baby Benaiah leaving many Nigerians heartbroken. Recall that baby Benaiah made news nationwide few weeks ago after a video of his father, Monday Agoboye, sitting in the middle of a busy road with very sickly Benaiah in his arms, weeping and crying for help, surfaced online after it was shared by a good samaritan, Lexy Mueka.

READ ALSO: See Why Dad of a Newborn 4Qhen, Almost Took His Life

Baby Benaiah was born with multiple holes in his heart and needed an estimated N15 million to undergo an emergency surgery. After his father’s cry went public, Nigerians rallied round and raised N70 million, far exceeding the cost of the surgery. Sadly, baby Benaiah died on Friday.

In a statement released yesterday, Benaiah’s father, said they were on their way to the airport to fly to Dubai when he developed complications.

He died at the Lagos State Teaching hospital where he was rushed to. The body of little Benaiah is currently at the morgue where an autopsy is to be carried out in a few days time.

Read the full statement below:

“It is with great sadness that We announce the passing of our son, Baby Benaiah “braveheart” Agoboye. Baby Benaiah died on our way to the Muritala Mohammed International Airport, Ikeja, Lagos for a flight to Dubai Scheduled for 12.55pm local time yesterday, the 15th of February, 2019. In our company at the time was the Doctor, whose duty was to manage Benaiah’s health on the trip. He battled extensively as we raced to Afriglobal Medicare, the nearest health facility on our way to the Airport, from where we proceeded to LASUTH; where unfortunately Baby Benaiah passed at about 10.30am. His body remains at LASUTH awaiting autopsy.

The family is deeply saddened by this event, as all arrangements had been concluded for Benaiah’s treatment at the Al Jalila Children’s Specialty Hospital(FZ LLC) in Dubai. We were scheduled to Fly with Emirates Airline, which was specially equipped with the facilities to manage Benaiah’s condition at a high altitude. We got into Lagos (when) in preparations to fly earlier but had to wait our turn since we were informed by the airline that there were other passengers with medical conditions earlier scheduled for the same arrangement.

We would like to thank everyone who has been of great support to the Monday Family through these challenging times. The team at UPTH for managing Baby Benaiah’s condition since he was 2months old, the staff and management of Afriglobal Medicare for availing us their facilities for free in time of the emergency. We also thank the team at LASUTH for their effort and support.

The family is also overwhelmed and humbled by the outpouring of love, support and prayers we have received from around the world. We give special appreciation to all of you who went out of your way to give your hard earned money and precious time to post and brought baby beniaiah’s story to the world. You are all deeply appreciated.”