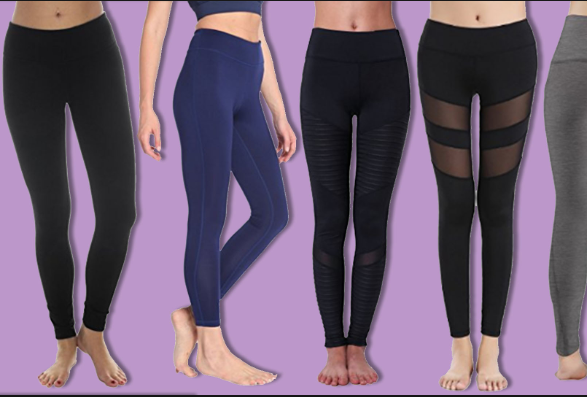 “Pay attention to the boy-child too” – Man, Abolaji Dairo, Who Was Sexually Abused By Maid At Age 7, Writes About The Bitter Experience

Maryann White, a mother with four sons has made a public plea with female students at the University of Notre Dame, asking them to stop wearing leggings “and consider choosing jeans instead.”

Maryann, who describes herself as a “Catholic mum”, passed her message across in a letter she titled, “The legging problem,” which was published this week in The Observer, Notre Dame’s student newspaper.

“I’m just a Catholic mother of four sons with a problem that only girls can solve: leggings,” she wrote.

While she insisted she is not trying to insult anyone or infringe upon anyone’s rights, Maryann started her letter by saying she had been considering writing it for some time after she attended Mass last autumn and saw four young women in front of her “all wearing very snug-fitting leggings and all wearing short-waisted tops.”

“Some of them truly looked as though the leggings had been painted on them … Leggings are so naked, so form fitting, so exposing”.

The mother said her sons “know better than to ogle a woman’s body – certainly when I’m around (and hopefully, also when I’m not).”

“But you couldn’t help but see those blackly naked rear ends,” Maryann said of the women wearing leggings during Mass.

“I didn’t want to see them — but they were unavoidable. How much more difficult for young guys to ignore them. Could you think of the mothers of sons the next time you go shopping and consider choosing jeans instead?” she asked.

“Let Notre Dame girls be the first to turn their backs(ides) on leggings.”

Maryann also blamed the entertainment and fashion industries for making it hard on Catholic women to teach their sons that women should be respected.

Begging female students to “think of the mothers of sons the next time you go shopping and consider choosing jeans instead,” Maryann added that she had hoped leggings eventually would go out of style.

I’ve thought about writing this letter for a long time. I waited, hoping that fashions would change and such a letter would be unnecessary — but that doesn’t seem to be happening. I’m not trying to insult anyone or infringe upon anyone’s rights. I’m just a Catholic mother of four sons with a problem that only girls can solve: leggings.

The emergence of leggings as pants some years ago baffled me. They’re such an unforgiving garment. Last fall, they obtruded painfully on my landscape. I was at Mass at the Basilica with my family.

In front of us was a group of young women, all wearing very snug-fitting leggings and all wearing short-waisted tops (so that the lower body was uncovered except for the leggings). Some of them truly looked as though the leggings had been painted on them.

A world in which women continue to be depicted as “babes” by movies, video games, music videos, etc. makes it hard on Catholic mothers to teach their sons that women are someone’s daughters and sisters. That women should be viewed first as people — and all people should be considered with respect.

I talk to my sons about Princess Leia and how Jabba the Hutt tried to steal her personhood by putting her into a slave girl outfit in which her body became the focus. (That’s the only scene in the whole franchise in which Leia appears in such a way — and it’s forced upon her.)

Leggings are hardly slave girl outfits. And no one is forcing them on the countless young women who wear them. But I wonder why no one thinks it’s strange that the fashion industry has caused women to voluntarily expose their nether regions in this way.

I was ashamed for the young women at Mass. I thought of all the other men around and behind us who couldn’t help but see their behinds. My sons know better than to ogle a woman’s body — certainly when I’m around (and hopefully, also when I’m not).

They didn’t stare, and they didn’t comment afterwards. But you couldn’t help but see those blackly naked rear ends. I didn’t want to see them — but they were unavoidable. How much more difficult for young guys to ignore them.

I’ve heard women say that they like leggings because they’re “comfortable.” So are pajamas. So is nakedness. And the human body is a beautiful thing. But we don’t go around naked because we respect ourselves — we want to be seen as a person, not a body (like slave-girl Leia).

We don’t go naked because we respect the other people who must see us, whether they would or not. These are not just my sons — they’re the fathers and brothers of your friends, the male students in your classes, the men of every variety who visit campus.

I’m fretting both because of unsavory guys who are looking at you creepily and nice guys who are doing everything to avoid looking at you. For the Catholic mothers who want to find a blanket to lovingly cover your nakedness and protect you — and to find scarves to tie over the eyes of their sons to protect them from you!

Leggings are so naked, so form fitting, so exposing. Could you think of the mothers of sons the next time you go shopping and consider choosing jeans instead? Let Notre Dame girls be the first to turn their backs(ides) on leggings. You have every right to wear them. But you have every right to choose not to. Thanks for listening to the lecture. Catholic moms are good at those!

However, her plea appears to have had the opposite effect. The letter has been heavily criticised by female students at the University, with students and alumni taking to Twitter to assert their right “to wear whatever the heck they want”.

The critics of the letter also pointed out that no one polices men’s morals and their fashion choices, even when they step out topless with snug shorts.

The letter has also inspired students at the University to organize a movement and wear leggings to protest Maryann’s views.

Anne Jarrett, a junior majoring in philosophy and gender studies, who is an activist at Irish 4 Reproductive Health, a campus advocacy group for reproductive rights, has also helped create a protest and a Facebook event called Leggings Pride Day.

Jarrett, 21, wasn’t surprised by Maryann’s point of view because she heard similar arguments in catechism classes and in Catholic school while growing up. There’s a double standard around modesty, she said. She added;

“The way that [White] used modesty in the letter as sort of like a call to women to do better was the same argument that I had seen a lot”.

Another student, Kaitlyn Wong, a senior also wrote in parody of White’s letter, asking people of all genders to express their solidarity by wearing their favorite pair of leggings that day. Again, more than 1,000 people expressed interest.

”I’m just a Catholic woman who feels the need for one specific type of pant that provides utmost comfort: leggings. Even if it’s not a ‘protest,’ having people talk about it is better than sitting around and doing nothing.”

A Notre Dame mother, Heather Piccone, questioned whether Maryann’s sons had ever taken their shirts off at the beach. She wrote in a letter published Tuesday;

“Women find male chests and abs attractive like men find women’s legs attractive. By her own definition and logic, any male out playing on a sunny day at the park with his friends should be ashamed of himself, and as a mother she should have properly raised her son not to tempt my daughter with his body.” 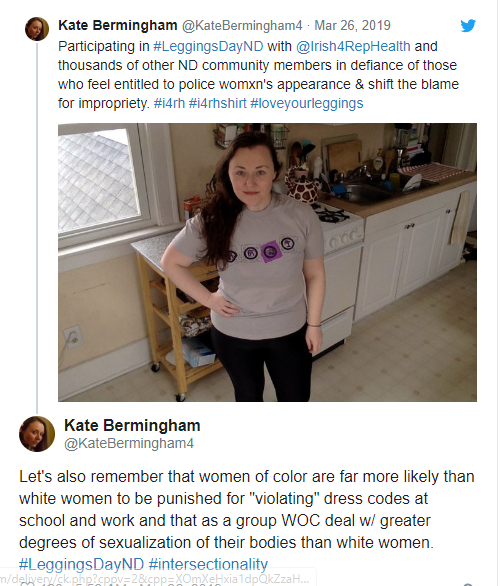