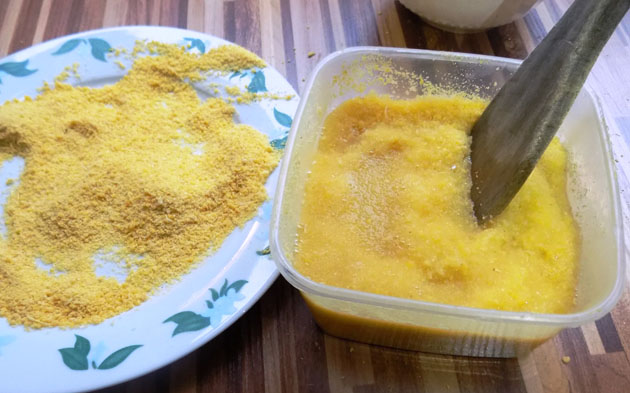 Baby Recipe: Steps To Making Carrot Puree And Its Benefits

Eba is a staple Nigerian food made from dried grated cassava flour, commonly known as garri. While it is enjoyed across tribes as a filling and affordable meal, oncology Professor, Adenipekun is suggesting that it significantly reduces the risk of colon cancer; he  said so during an interview with Tribune.

Nobody could have guessed that eba will be attributed to such health benefit because it is often seen as the poor man’s food, even if it is enjoyed by all classes of people.

According to the doctor, the staple is effective in limiting the risk of colon cancer because it is is rich in roughages. He also gave advice on signs and symptoms to look out for to catch cancer particularly of the colon before it reaches its last stages.

Read what he said below:

If you notice blood in your stool or urine, see a doctor. It could be the beginning of a colorectal cancer and not hemorrhoid or a problem in the bladder. If you also observe that you do not empty your bowels daily, do not think that it is good. It could also be the beginning of colonic problem. So, make sure you eat lots of roughages.

For instance, many people run away from eating eba, a cheap and good source roughage that can ensure that they empty their bowels daily. But individuals can reduce their risk of colon cancer by eating eba on a regular basis instead of those highly processed foods.

Would you increase your intake of eba?